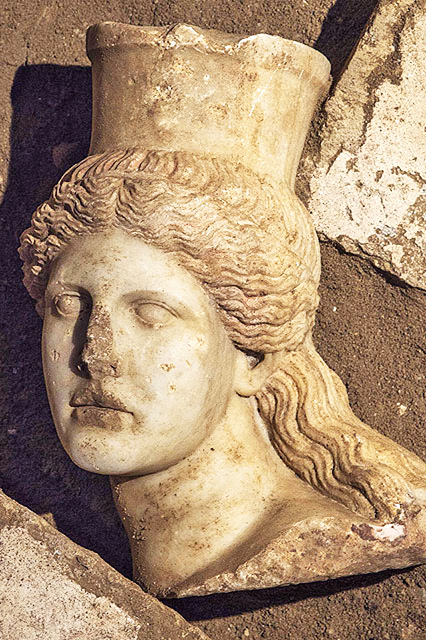 Work on the Kasta Mound in Amphipolis

Work on the Burial Monument of the Kasta Mound in Amphipolis is progressing according to the timetable of the co funded programme run by the Directorate for Restoration of Ancient Monuments of the Ministry of Culture and Sports, as was announced by the latter. Highly specialized work began in mid-May; the replacement of the monument’s temporary reinforcement and support system with a new one. The specially designed new structure provides the monument with stronger and fewer supports so that it is easier to carry out the required work on its conservation and stabilizing. This work has already covered three out of four areas of the monument and it is expected to be completed in early August. It is however already possible to interpret this splendid ancient building’s architecture, size, scale and both sculpted and painted decoration.

The programme for the preservation of the monument’s mortars and stones, both those standing and the ones kept in the Amphipolis Museum, will be shortly carried out by the Directorate for Conservation of the Ministry of Culture and Sports.

In order to meet the work’s scientific requirements, the ancient building materials are currently being analyzed and tested for their durability by the Directorate of Research and Technical Support for Studies and Restoration Projects of the MOCAS, following a selection of stone samples from the monument. The Directorate for Restoration is also programming drill sampling round the monument to complete the geostatic studies.

In August, the Serres Ephorate of Antiquities has scheduled to open archaeological investigative trenches to support the restoration work.

The cleaning of the Sphinx’s head has been completed by the Amphipolis Museum workshop and it is to be temporarily exhibited, so that visitors may have the opportunity to observe and admire close up an emblematic element of the entrance to the burial monument of the Kasta Mound.

Once again, the MOCAS notes that the monument’s excavation, restoration, conservation and enhancement have been done on an interdisciplinary basis. The necessary studies were carried out according to the principles of monument restoration and subsequently priority was given to a highly specialized, complex project, that was technically demanding and with a large budget.