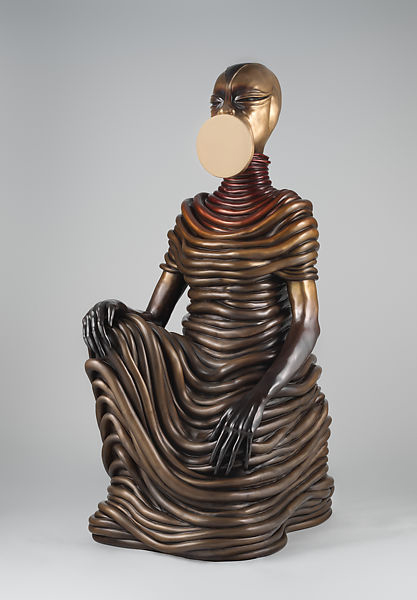 The four niches on the facade of the Metropolitan Museum of Art have been empty since 1902, when the Museum’s Beaux-Arts Fifth Avenue facade and Great Hall opened to the public. Now, after 117 years the niches are occupied by four bronze sculptures by Kenyan-American artist Wangechi Mutu.

The NewOnes, will free Us inaugurates an annual commission to animate The Met’s historic facade. Designed by Richard Morris Hunt and completed in 1902, the facade features four niches that were always intended to house free-standing sculptures, but have long lain empty. In filling them now with Mutu’s extraordinary sculptures, the Museum brings to fruition a dream 117 years in the making.

Mutu has responded to The Met’s invitation by creating four bronze sculptures, individually titled The Seated I, II, III, and IV (2019). As with all of her work, these pieces engage in a critique of gender and racial politics that is as pointed as it is poetic and fantastic. With The NewOnes, will free Us, the artist has reimagined a motif common to the history of both Western and African art: the caryatid, a sculpted figure, almost always female, meant to serve as a means of either structural or metaphorical support.

Whether carved out of wood for the prestige stool of a West African king or chiseled out of marble for a building on the Athenian Acropolis, the caryatid has always been confined to her role as load-bearer. For her part, Mutu stages a feminist intervention, liberating the caryatid from her traditional duties and her secondary status. Mutu does so, moreover, in the context of a Neoclassical facade, whose original architects sought to convey a far more conservative set of values.

Simultaneously celestial and humanoid, each sculpture is unique, with individualized hands, facial features, ornamentation, and patination. Mutu’s embellishments take a great deal of inspiration from customs practiced by specific groups of high-ranking African women. The horizontal and vertical coils that sheathe the figures’ bodies, functioning as garment and armor all in one, reference beaded bodices and circular necklaces, while the polished discs set into different parts of the sculptures’ heads allude to lip plates. Belonging to no one time or place, Mutu’s hybrid figures are invariably stately, resilient, and self-possessed. They announce their authority and autonomy. Appearing to have recently arrived on the facade of The Met, they are the “new ones” who bring word of new ideas and new perspectives.

The NewOnes, will free Us constitutes one of Mutu’s most important and remarkable bodies of work to date, the culmination of two decades of sustained artistic experimentation and rigorous research into the relationship between power, culture, and representation.