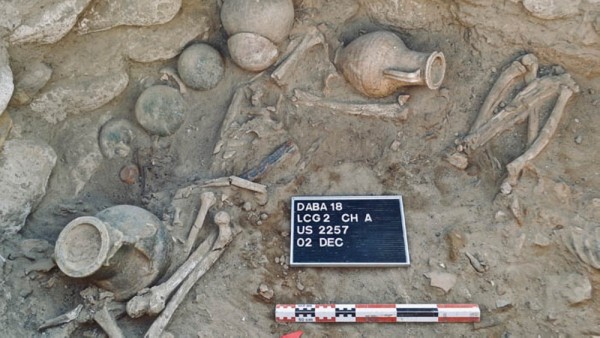 A new and important archaeological discovery dating back to the Iron Age has been found by the Ministry of Heritage and Culture at an archaeological site in the Wilayat of Dibba, in Oman’s Musandam Governorate.

The artefacts are estimated to have been created between 1300 and 100 BC. In this context, the Ministry of Heritage and Culture said, “Excavation work conducted by the Ministry with an Italian mission from the University of Rome revealed more secrets of this important archaeological site, which was first discovered in 2012, where excavation and exploration work pointed to the discovery of an oval shaped tomb built within the funerary complex. It dates back to the Iron Age and the pre-Islamic era between 100 BC and 300 AD.”

“The tomb includes the remains of 12 skeletons, many funerary collections such as glazed and unglazed vessels, stone and bronze vessels, swords, iron arrows, and local silver and gold ornaments imported from neighbouring civilisations,” the Ministry added.

“One of the most prominent discoveries of this tomb is an amulet from Egypt found for the first time in the Sultanate of Oman. This amulet is known as the Horus Eye, also known by the name of the Wadjet, Wadjat or Aujat. In the Egyptian civilisation it symbolises protection, royal power and good health. The amulets were often made in the form of a Horus Eye found by archaeologists in the form of a necklace or fences. This is a traditional custom of the Egyptian civilisation and certainly the Horus Eye was the main element in the bracelets of a number of mummies prepared to protect the Pharaoh after life.”

Sultan bin Saif Al Bakri, Director General of Antiquities, said, “this necklace is the second to be found at this site, where we had previously found an amulet of the civilisations that originated in Iraq in the form of a stone inscribed with the cuneiform name De Jolla, the god of healing in the Mesopotamian civilisation. This was also used for protection and from for the deceased.

Jolla is said to be the greatest physician and healer of diseases in the Babylonian civilisation dating back to the second half of the second millennium BC. A number of related discoveries have previously found their way to the National Museum.