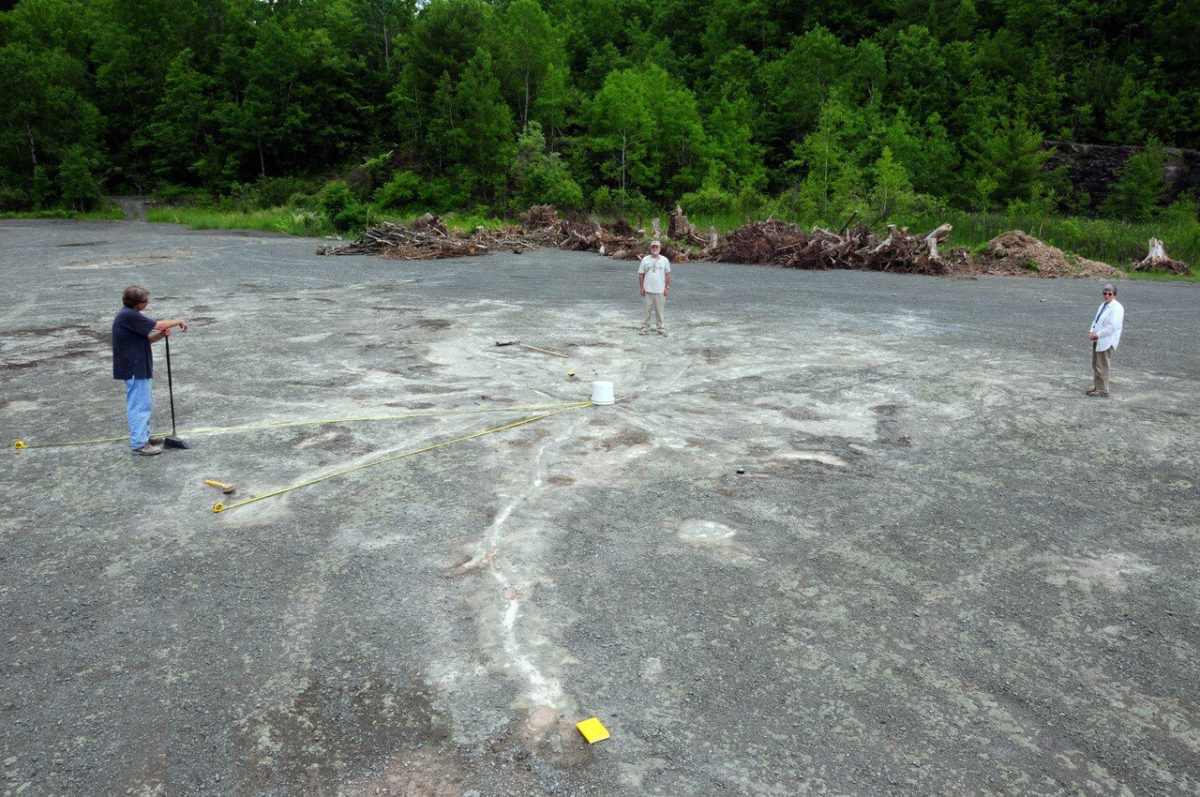 Scientists have discovered remnants of the world’s oldest fossil forest in a sandstone quarry in Cairo, New York.

It is believed the extensive network of trees, which would have spread from New York all the way into Pennsylvania and beyond, is around 386 million years old.

This makes the Cairo forest around 2 or 3 million years older than what was thought to be the world’s oldest forest at Gilboa, also in New York State and around 40 km away from the Cairo site.

The new findings, which have been published today in the journal Current Biology, have thrown new light on the evolution of trees and the transformative role they played in shaping the world we live in today.

A team led by scientists at Binghamton University, New York State Museum and Cardiff University have mapped over 3,000 square meters of the forest at the abandoned quarry in the foothills of the Catskill Mountains in the Hudson Valley.

Their investigations showed that the forest was home to at least two types of trees: cladoxylopsids, primitive tree-fern-like plants, which lacked flat green leaves, and which also grew in vast numbers at Gilboa; and Archaeopteris, which had a conifer-like woody trunk and frond-like branches which had green flattened leaves.

A single example of a third type of tree was also uncovered, which remained unidentified but could possibly have been a lycopod.

All these trees reproduced using only spores rather than seeds.

The team also reported a ‘spectacular’ and extensive network of roots which were more than eleven meters in length in some places which belonged to the Archaeopteris trees.

It is these long-lived woody roots, with multiple levels of branching and small, short-lived perpendicular feeder roots, that transformed the interactions of plants and soils and were therefore pivotal to the co-evolution of forests and the atmosphere, the researchers state.

Until this point in time, trees such as the cladoxylopsids only had ribbon-like and mostly unbranched roots which had to be constantly replaced as the plant above ground grew.

They believe the forest was eventually wiped out by a flood due to the presence of many fish fossils that were also visible on the surface of the quarry.

“It is surprising to see plants which were previously thought to have had mutually exclusive habitat preferences growing together on the ancient Catskill delta,” said co-author of the study Dr Chris Berry from Cardiff University’s School of Earth and Ocean Sciences.

“This would have looked like a fairly open forest with small to moderate sized coniferous-looking trees with individual and clumped tree-fern like plants of possibly smaller size growing between them.”

The research team say that the Cairo forest is older than the one at Gilboa because the fossils were lower down in the sequence of rocks that occur in the Catskill mountains.

“In order to really understand how trees began to draw down carbon dioxide from the atmosphere, we need to understand the ecology and habitats of the very earliest forests, and their rooting systems,” continued Dr Berry.

“These remarkable findings have allowed us to move away from the generalities of the importance of large plants growing in forests, to the specifics of which plants, in which habitats, in which types of ecology were driving the processes of global change. We have literally been able to drill into the fossil soil between the trees and are now able to investigate geochemical changes to the soil with our colleagues at Sheffield University.

“We are really getting a handle on the transition of the Earth to a forested planet.”