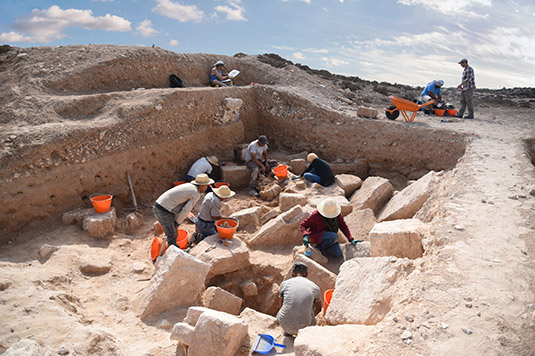 On the trail of purple

The port facilities of Meninx

As part of a Deutsche Forschungsgemeinschaft-funded project, a German-Tunisian team co-directed by Ludwig-Maximilians-Universität archaeologist Stefan Ritter has surveyed the ancient city of Meninx on the island of Jerba and reconstructed its trading links in antiquity.

The port of Meninx was unusually situated and well protected. Incoming ships first had to negotiate a deep and broad submarine channel in the otherwise shallow bay, before approaching the city itself via another channel that ran parallel to the coast for much of its length. They then had to traverse a wide stretch of shallow water to reach the city’s wooden and stone quays, which extended seawards from the strand. From these piers, stevedores could readily unload cargoes and transport them to the nearby warehouses. We know all of this thanks to the work of LMU archaeologist Stefan Ritter and his team, which has allowed them to reconstruct the port facilities of Meninx on the island of Jerba off the coast of North Africa. The city was an important trading center in the time of the Roman Empire, and had commercial links with many other regions throughout the Mediterranean.

In the course of a DFG-funded project that lasted up until the end of 2019, Ritter, together with his colleague Sami Ben Tahar (Institut National du Patrimoine, Tunis) and a joint German-Tunisian team, has surveyed and explored the remains of Meninx and its port facilities. With the aid of magnetometer surveys, the researchers were able to map the highly unusual layout of the city, whose main streets ran parallel to the coastline. In addition, on the basis of their mapping data, they carried out exploratory excavations on selected temples and shrines, as well as commercial and residential buildings. “We even discovered a well preserved private bathhouse, which dates from the Roman imperial period and included mosaic floors, splendid wall paintings and a range of statuary,” Ritter explains.

Based on their findings, Ritter and his collaborators believe that the city’s prosperity rested in large part on a single commodity – the purple dye, which was obtained from the sea snail Murex trunculus. “We have good reasons to believe that the purple dye from Meninx was not exported as such, but was used locally to dye textiles, which were then sold further afield,” says Ritter. The material, which was highly valued, was apparently exported all around the Mediterranean littoral and beyond. In exchange, the inhabitants of Meninx imported foodstuffs, wine, fine domestic pottery and marble sourced from Italy, Spain, Greece, Asia Minor and Egypt.

The settlement was founded in the 4th century BCE, when the Carthaginians were still the dominant force in the area. It reached its zenith during the period between the 1st and 3rd centuries AD, when Imperial Rome was at the height of its power and Meninx possessed its own theater and was adorned with other imposing urban structures. Owing to its location on the shores of a shallow bay, it was relatively well protected from attack. However, the harbor itself was accessible only via submarine channels that could be navigated only with the help of local pilots, says Ritter. The underwater investigations, which were carried out by the Bavarian Society for Underwater Archaeology, not only uncovered traces of the original harbor facilities and the tricky passage to the docks, they also brought to light a number of wrecks and the remains of piers. Together with their Tunisian colleagues, the LMU archaeologists now plan to extend their investigations on Jerba as part of a more comprehensive comparative study of the region’s ancient heritage.