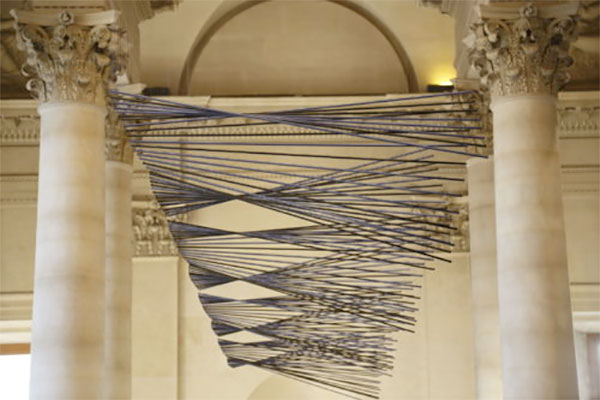 Louvre: L’Onde du Midi is a pleasant surprise to visitors

A work by Elias Crespin

Constructed of 128 aluminum tubes suspended from the ceiling forming a perspective image , the new work of “kinetic art” by Venezuelan artist Elias Crespin has been “undulating” over the past few days in the Sully wing of the Louvre: it is a contemporary piece of art in a museum dedicated to and guardian of our global classical heritage.

Like a silent ballet inviting the visitor to reflect, the work named “’Onde du Midi” moves on the edge of the museum’s Escalier du Midi in a continuous choreography whose rhythm is regulated every 30′ by mathematical algorithms. The place where the work is on show is a spot where the light dims allowing the tubes painted deep blue and black to be lit.

Born in Venezuela in 1965, computer engineer Crespin took part in the Paris exhibition “Artists and Robots” in 2018. On setting foot in the French capital two years ago, the artist had been very moved that he was being welcomed by the “world’s encyclopedic museum”.

Head of cultural programmes at the Louvre Dominique de Font-Reaulx welcomed the arrival of the “first kinetic work in the most formal part of the museum which Napoleon’s architects had conceived in a pure Neoclassical style”.

To mark the 30th anniversary of the now emblematic pyramid by I.M. Pei in the Louvre’s entrance, inaugurated in 1989, 30 events have been programmed till February.

Based on the museum’s design that prides itself in bringing, for the visitor’s delight, its precious treasures of ancient, classical and modern art next to the most contemporary works, the Louvre —prior to Crespin— has organized exhibitions with such leading art figures as Anselm Kiefer (2007), François Morellet (2010) and Cy Twombly (2010).