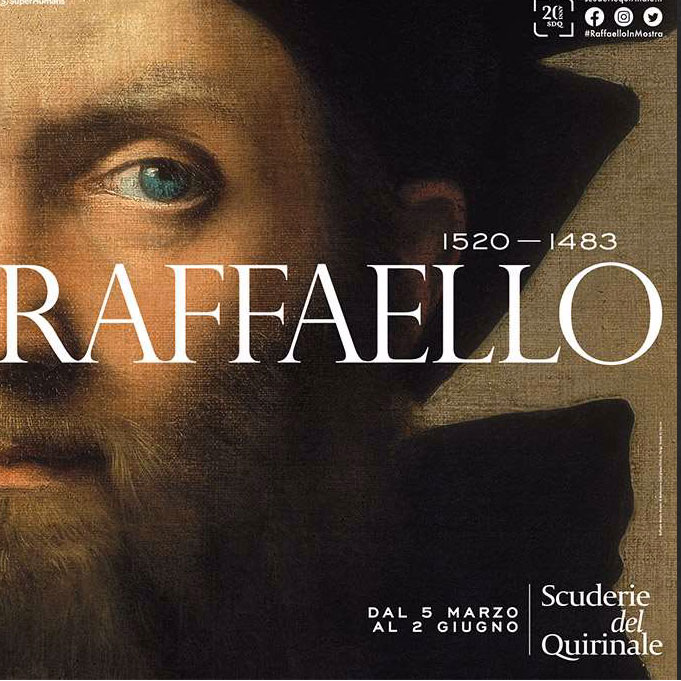 The Raffaello exhibition will remain closed until 3 April in compliance with the Decree of the Italian Prime Minister concerning the implementation of measures against COVID-19.

The show at the Scuderie del Quirinale, paying homage to Raphael Sanzio, five hundred years after the death the supreme Renaissance artist, will remain closed until further notice. For the time being, we can only view pictures of the exhibition.

Raphael died in Rome on 6 April 1520 and it is in Rome that he owes his universal fame. It is therefore particularly significant that this national tribute should take place in the city where the artist from Urbino fully expressed his formidable talent, and where his life suddenly ended at only 37 years of age. More than one hundred masterpieces that are autographed or, in any event, are attributable to Raphaelesque ideas are gathered together at the Scuderie for the first time, including paintings, cartoons, drawings, tapestries and architectural projects. These are joined by an equal number of works for comparison and context (sculptures and other ancient artefacts, Renaissance sculptures, codices, documents and precious masterpieces of applied art) amounting to a total of 204 works on display, including 120 paintings and drawings by Raphael himself.

A unique event that, in the context of modern Europe, aims to restore the universal worth of Raphael’s art, which represented the undisputed basis of western artistic standards for four centuries. Jointly organised by the Scuderie del Quirinale in conjunction with the Uffizi Gallery, the exhibition is curated by Marzia Faietti and Matteo Lafranconi with the assistance of Vincenzo Farinella and Francesco Paolo Di Teodoro. The project benefitted from collaboration with the Borghese Gallery, the Parco Archeologico del Colosseo and the Vatican Museums, institutions that generously made themselves available to create significant synergistic coordination with the Scuderie del Quirinale and Uffizi Gallery for the celebrations of the year of Raphael in Rome.

The exhibition, unprecedented in scale, presents masterpieces from the collections of the most important national and international museums and collections including: Gallerie Nazionali d’Arte Antica, the Pinacoteca Nazionale (Bologna), the Museo e Real Bosco di Capodimonte, Galleria Borghese, the Museo Archeologico Nazionale (Naples) and the Fondazione Brescia Musei, as well as the Vatican Museums, the Louvre, the National Gallery (London), the Prado, the Museo Nacional de Artes decorativas (Madrid), the National Gallery of Art (Washington), the Metropolitan Museum (New York), the Albertina (Vienna), the British Museum, the Royal Collection, the Ashmolean Museum (Oxford) and the Musée des Beaux-Arts (Lille).

The works include: the Madonna del Granduca and Woman with a Veil from the Uffizi and the great altarpiece of St Cecilia from the Pinacoteca Nazionale in Bologna; works that have never returned to Italy since they were exported to form part of collections such as the sublime Alba Madonna from the National Gallery in Washington, the Madonna of the Rose from the Prado or the Tempi Madonna from the Alte Pinakothek in Munich; extraordinary and iconic paintings such as the Portrait of Baldassarre Castiglione and the Self-portrait with a Friend from the Louvre. The portraits of the two popes who allowed Raphael to demonstrate his immense artistic potential in the Roman years: that of Julius II from the National Gallery in London and that of Leo X with the cardinals Giulio de’ Medici and Luigi de’ Rossi from the Uffizi, displayed for the first time following its meticulous restoration, which lasted three years, by the Opificio delle Pietre Dure in Florence, a project that has restored its original luministic and chromatic sharpness and the incredible descriptive force of its details.

Raphael lived in the city of the Popes, the Curia, the papal patrons, the humanists, scientists and writers, many of whom were his friends, from 1509 to 1520. Eleven intense and prolific years, during which he was able to express his talent in new and experimental forms that consecrated him, along with Michelangelo, as the greatest artist of the late Renaissance. The exhibition pays particular attention to the fundamental Roman period, while fully describing the vast and articulated creative works of the artist from Urbino in a monographic key: from the plastic to the decorative arts, from antiquities to architecture to town planning – Raphael became head of the Fabbrica di San Pietro, the construction of St Peter’s, in 1514 – the exhibition is not limited to displaying the masterpieces of painting, but also extends to all the design work performed by the artist, on an unprecedented scale for an exhibition dedicated to him.

Conducting the excavations to bring artefacts and ruins to light; studying and preserving the urban remains of ancient Rome; overseeing the grandiose construction site of St Peter’s basilica; perfecting the study and method of painting, loved and requested by the most prestigious clients for its naturalness and unparalleled harmony. These, and many others, were the tasks that Raphael was called upon to perform throughout the Roman period and until his sudden passing.

At his unexpected and premature death, great was “the dismay and sadness that his passing generated in the soul of all, but particularly within the community of humanists which had both inspired and allowed the exponential development of Raphael’s design potential and cultural ambitions during the Roman years” (from the essay “La morte di Raffaello nelle parole dei contemporanei” by Matteo Lafranconi).