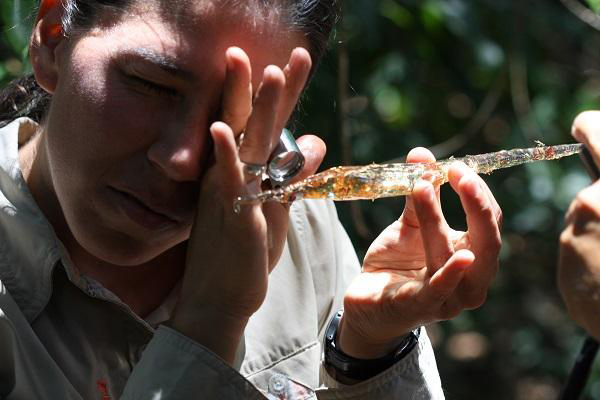 This material is not a semi-fossilized resin

The known Madagascar copal is a more recent resin from what was thought —it has about a few hundred years— and trapped pieces in this material are not as palaeontological important as thought traditionally. This is one of the conclusions of the new article in the journal PLOS ONE, whose first author is Xavier Delclòs, professor at the Faculty of Earth Sciences and member of the Biodiversity Research Institute (IRBio) of the University of Barcelona.

The study states that the well-known Madagascar copal is not a semi-fossilized resin but a material made during the Antropocene, historical period in which human impact was extreme globally. The findings would require going over the described taxon during the last hundred and fifty years to avoid taxonomic mistakes and unprecise paleoenvironmental reconstructions, the study notes.

Other participants in this study, the first to describe the oldest age and geographical origin of the Madagascar copal, are Enrique Peñalver, from the Spanish Geological and Mining Institute (IGME), Voajanahary Ranaivosoa, from the University of Antananarivo (Madagascar) and Mónica M. Solórzano Kraemer, from the Senckenberg Research Institute (Frankfurt, Germany).

From Tanzania coasts to Indian markets

Known for hundreds of years, the Madagascar copal crossed the trade routes from Tanzania to China through the Indian Ocean and the Indian markets. Sold as incense at first, it became pricey due to its high value to make varnish. More recently, it was used as disinfectant —burnt in Madagascar houses— and it was sold to scientists and tourists for its high content of arthropods inside.

This ancient resin which was not completely fossilized comes from Hymenaea verrucosa trees, a fabacean that grows in the eastern coast of Madagascar, one of the most threatened and fragile ecosystems in the world.

Wrong dating for an ancient resin

According to the study, the scientific community studied the biological remains inside the copal, named bioinclusions, and dated these findings from a few tens to millions of years. However, the origin of the studied material was never found —it is not cited in any study—, and the exact age of the studied pieces was never proved.

“The correct dating of the copal, as an important factor for a planetological study, can influence all the following paleo-biological studies, such as those related to phylogeny, paleobiogeography, and paleoclimatology”, notes Professor Xavier Delclòs, from the Department of Earth and Ocean Dynamics of the UB.

According to the study, some found species in the Madagascar copal —thought to be extinct— could be now in forest habitats that were not considered to be their natural habitats. This can explain the occasional presence of arthropod species inside this old resin and which are currently living in the area.

The study notes that any new described taxon after the Madagascar copal should be attached the dating of Carbon-14 for the studied sample (at least, the sample including the main piece or holotype). Also, museums with Malagasy copal specimen pieces should review the dating with the Carbon-14 system.

“The Madagascar copal is a file of great scientific interest. It represents a part of the Malagasy biodiversity and ecosystem during historical periods and can contain extinct species due to the high rate of deforestation in the Red Island over the last three hundred years”, note the authors. “If this intense deforestation continues at the current rate, it is likely for the preserved species in the resin of Hymenaea trees —together with historical entomological collections— to become the only knowledge reservoirs to do research on a part of the entomofauna of fragile tropical forests of Madagascar lowlands”, conclude researchers.