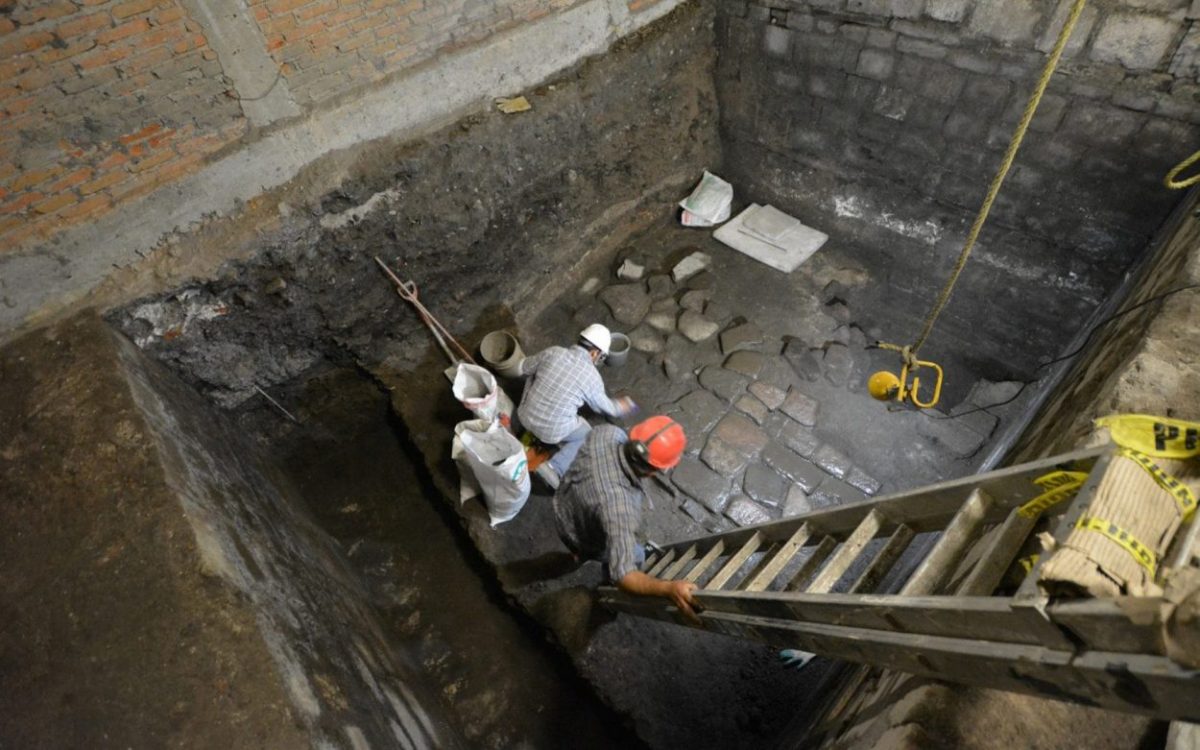 Under the floors of the Nacional Monte de Piedad, in Mexico City

Within the walls of the Old Houses of Axayácatl some of the most decisive episodes of the conquest of Mexico-Tenochtitlán occurred, such as the death of the tlatoani Moctezuma Xocoyotzin, possibly on June 29, 1520; unexpected outcomes that undermined the relationship between Mexicans and Spaniards and triggered the open confrontation.

The most recent discovery made by specialists from the National Institute of Anthropology and History (INAH), of vestiges of that pre-Hispanic palace, and of the remains of a later house built under the orders of Hernán Cortés, with reused materials from the previous Tenochca building, revives the memory of those historical events, five centuries later.

Thanks to historical sources, it is no mystery for archaeologists that under the floors of the Nacional Monte de Piedad, one of the most emblematic buildings of Mexico City’s Historic Center, located next to the Metropolitan Cathedral, are the foundations of the Palace of Axayácatl, which functioned as the living quarters of Cortés’ entourage upon their arrival in the heart of Tenochtitlan.

Over the last two decades, and taking advantage of diverse remodeling projects undertaken in the headquarters of that institution, various INAH experts have found remnants of the former residence of Moctezuma II’s father. The most recent discoveries were brought to light during archaeological interventions led by Raúl Barrera Rodríguez and José María García Guerrero, head and collaborator, respectively, of the Urban Archeology Program (PAU).

Following an inspection for refurbishments conducted in the northern half of the historic building, PAU personnel carried out an archaeological salvage project between the first days of September 2017 and mid-August 2018, focusing on the main courtyard and an adjacent room. It is noteworthy that the project continues to the present in the post-dig research phase.

Excavations resulted in the discovery of numerous basalt slab floors, which must have formed part of an open plaza in the Palace of Axayácatl, the ruler who controlled the destiny of Tenochtitlan between 1469 and 1481.

Also, from the early Viceregal period (1521-1620 AD), the remains of a house built by order of Cortés were uncovered. That construction, where the Spanish conqueror resided for several years, would also become the seat of the first Cabildo of New Spain (around 1525) and of the Marquessate of the Valley of Oaxaca, granted to the conqueror four years later.

As an exciting part of the public outreach program “Contigo en la Distancia” (“With you from a Distance”), from the Ministry of Culture, the head of the PAU, Raúl Barrera, and his collaborator José María García, explain that they dug 12 test pits—2 meters per side and 1.50 m deep—around the main courtyard of the National Monte de Piedad, where remodeling work was being carried out to reinforce the columns that define the structure and support the first level of the building.

By excavating a series of test pits, on the north, east and west sides, the remains of a stone masonry wall—1.50 meters high by 1.25 m wide—were uncovered. This wall served as a foundation and basal platform for a series of columns of the building erected around 1755, which allows us to deduce that the central courtyard was originally larger. Also, in the west section of this same space were found the subflooring: basal portions and a shaft of other columns from the early Viceregal period.

However, major surprises awaited in the adjacent room. PAU archaeologists had the opportunity to conduct an extensive excavation, which allowed them to locate the remains of a room made of basalt and tezontle (vesicular lava) dressed stones—5 by 4 meters—, whose base sat upon a floor of basalt slabs. Further analyses led to the conclusion that this was the home of Hernán Cortés, once Mexico-Tenochtitlan fell in 1521.

Below the subflooring of the house of Cortés, more than 3 meters deep, the remains of another floor of basalt slabs, but from pre-Hispanic times, were detected. Given its characteristics, the specialists deduced that it was part of an open space in the former Palace of Axayácatl, probably a courtyard.

Barrera and García emphasize that the vestiges of the nascent Viceregal era correspond to reused materials from the Old Houses of Axayácatl. These premises, like so many other structures of the Sacred Precinct of Tenochtitlan, were destroyed by the Spanish and their indigenous allies, almost to their foundations.

As an example of this, embedded in the façade of the southeast interior corner of the colonial room, two pre-Hispanic dressed stones carved with sculptures in high relief were found. They depicted a feathered serpent (Quetzalcóatl) and a headdress of feathers, and must have belonged to a panel of the Palace of Axayácatl. Also, another Mexica sculpture with the glyph that symbolizes the tianquiztli or market was recovered, in its place as part of a shaft.

Some of the diagnostic materials, which allow the preliminary dating of these findings, are the remains of pre-Hispanic and colonial pottery, whose types (styles) belong to the aforementioned historical periods: Aztec III: Orange Monochrome, Black-on-Orange and Texcoco Burnished Earthenware; as well as glazed earthenware and Spanish and New Spain majolica.

Raúl Barrera, also a researcher at the INAH Directorate of Salvage Archaeology, reflects on the fact that some material evidence speaks volumes, by its very paucity. Such is the case for the recent discoveries in the National Monte de Piedad, which “speak” of the destruction that the main buildings of Tenochtitlan were subjected to, both for symbolic and practical purposes.

Despite the modest nature of the remains, those pre-Hispanic floors were the same ones that the Spanish invaders and their allies tread upon during their arrival to Tenochtitlan, on November 8, 1519. Moctezuma II allowed them to stay in the old houses that had belonged to his father, and soon after they turned them into their barracks.

While in that palace, numerous events took place. For example, they remodeled a room to celebrate mass, and right there, they also held various rulers captive, starting with their distinguished host: Moctezuma Xocoyotzin; as well as Cuitláhuac, lord of Iztapalapa; Cacamatzin, tlatoani of Texcoco; and Itzcuauhtzin, lord of Tlatelolco, among others.

Following on the massacre during the festival of Tóxcatl that took place at the Templo Mayor (“Great Temple”) on May 22 of 1520, by the order of Pedro de Alvarado, the Spanish withdrew and returned to the Palace of Axayácatl. That incident unleashed the anger of the Mexica and, at the end of June of that year, they besieged the invaders in that building. Hernán Cortés wanted to contain their fury through Moctezuma, who tried to placate them from the roof of the palace. But the efforts were in vain, as his brother Cuitláhuac had already been ordained the new ruler.

On the night of June 30, 1520, the Spanish fled to Tlaxcala by the great causeway of Tlacopan (today Tacuba), leaving behind the Old Houses of Axayácatl.

After the fall of Tenochtitlan, the surviving Mexicas were forced to destroy, with their own hands, their temples and palaces and build the new city using the same materials. The Old Houses of Axayácatl would gave way to the Houses of Hernán de Cortés, which were also the temporary headquarters of the first Cabildo of New Spain, around 1525, and of the Marquessate of the Valley of Oaxaca, a noble title carrying the responsibility for creating a government, granted in 1529 for his services to the Spanish Crown.

Upon the conqueror’s death in 1547, his descendants retained ownership. His son Martín Cortés Zúñiga inherited the marquessate, but in 1566 he was involved in a conspiracy that sought to seize the government of New Spain, so he was expelled from the Viceroyalty. The houses and the extensive land remained in the hands of a legal representative and, already in poor condition, were sold to the Sacro Monte de Piedad in 1836.