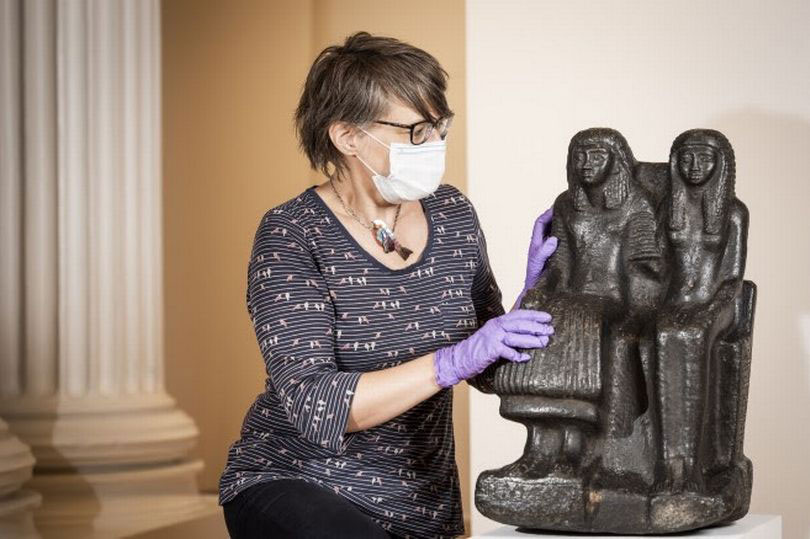 The statue of an Egyptian couple, the High Priest Sethmose and his wife Isisnofret, formerly the property of Thomas Cook, travel business has been purchased for the city of Leicester.

Depicting the seated figures of Sethmose and his wife Isisnofret, the statue will take pride of place in New Walk Museum’s Ancient Egypt gallery when the city’s museums reopen later this year.

The 2ft-high statue shows both figures wearing fashionable contemporary dress of the period, with the female figure wearing a close-fitting ankle-length garment and a tripartite wig – which divides the hair into three sections, with two sections draped over the shoulders at the front and the third arranged over the back.

The male figure, Sethmose – whose titles included High Priest of Anhur and Sobek and Chief of the Harem of Sobek – also wears a wig and is dressed in a pleated kilt.

Inscriptions on the statue include references to the Pharaoh Seti I – the second ruler of the 19th dynasty – and the god Horus, typically represented as a falcon-headed crocodile.

As hard stone like granite was difficult to procure in Ancient Egypt, the statue was probably made with royal permission and designed to be on display in a public place or temple.

Deputy city mayor Cllr Piara Singh Clair said: “The inscriptions on the back and sides of this statue suggest that it was made to be viewed from all angles, which supports the theory that it would originally have been on display in a public space.

“Now, some 3,000 years after it was made, I’m delighted that the statue will be back on public display and inspiring visitors to Leicester’s flagship museum.”

The black granite statue – dating from the end of the 19th dynasty in around 1200 BC – was put up for sale by administrators following the collapse of the Thomas Cook travel business last year.

Thanks to generous contributions from the National Heritage Memorial Fund, the Arts Council England/V&A Purchase Grant Fund and Art Fund, and with support from the Friends of Leicester & Leicestershire Museums, the Leicester Archaeological & Historical Society, the Leicester Literary & Philosophical Society and the City of Leicester Museums Trust, the city was able to raise the £150,000 required to secure the statue for Leicester’s museums.

The statue will be an important new addition to Leicester’s award-winning Ancient Egypt galleries, joining four mummies – Pa-nesit-tawy, Pe-iuy, Bes-en-Mut and Ta-Bes – that were donated to Leicester by Thomas Cook’s son, John, in 1885.

John Mason Cook (1835-1899) was presented with the statue by the Egyptian authorities in the 1890s to thank him for the contribution made by the company – founded in Leicester in 1841 – to the development of tourism on and around the Nile. The statue became part of the Thomas Cook archive but was put up for sale by administrators when the tour operator collapsed. The rest of the archive – comprising thousands of items, from the earliest days of package travel to the modern day – was transferred to its new home at the Leicestershire, Leicester & Rutland Record Office in January 2020 after a successful bidding process.

Leicester City Museums – which is an Arts Council England National Portfolio Organisation – is now planning a major new exhibition featuring dozens of objects from the Thomas Cook archive, and although it’s not clear when Leicester’s museums will be able to re-open, the Thomas Cook-inspired exhibition will be one of the first to go on display.

Joanna Jones, head of arts, museums, festivals and events at Leicester City Council, said: “We are very grateful to everyone involved in bringing this beautiful statue to Leicester.

“It is not only an important addition to Leicester’s fabulous Egyptian collection, but it’s also another link to the Thomas Cook story – and a reminder that, thanks to Thomas Cook, Leicester can rightly call itself the birthplace of tourism.”