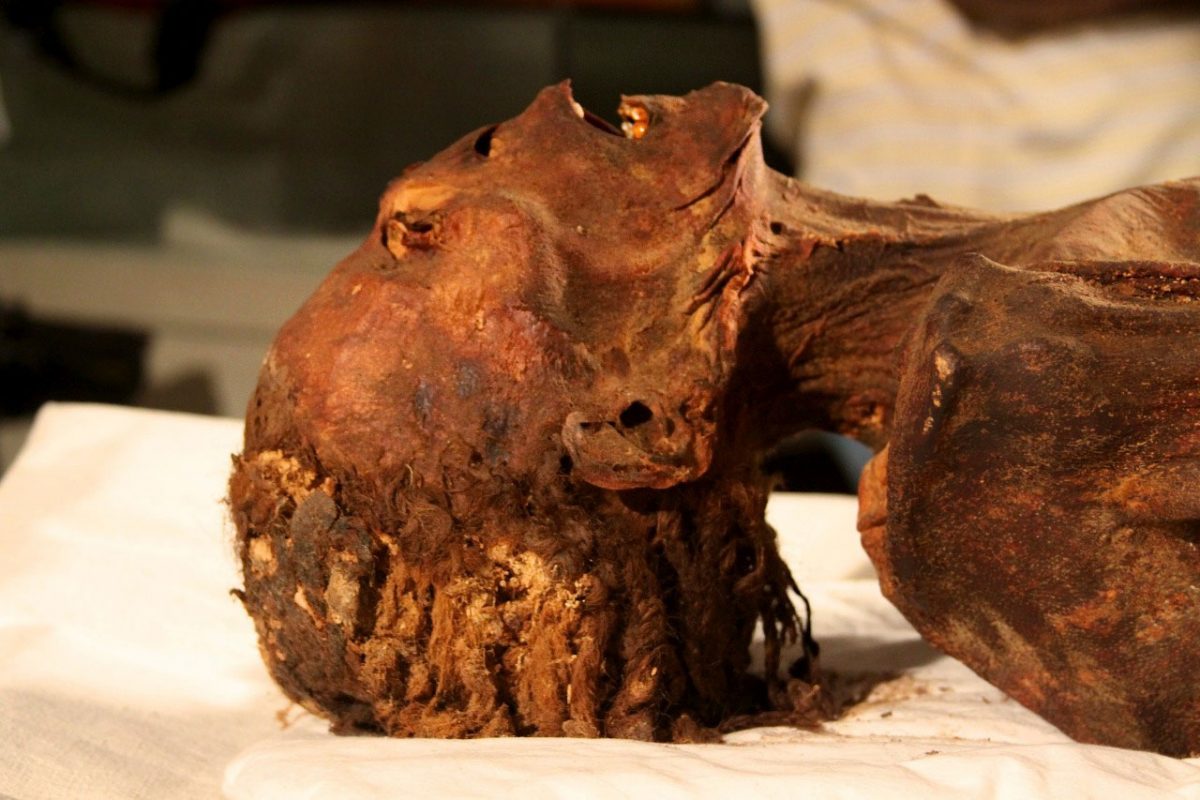 An ancient Egyptian princess known as ‘the mummy of the screaming woman’ had died of a heart attack. This is, at least, what Dr. Zahi Hawass and Dr. Sahar Saleem support in a new paper resulting from the latest research on the mummy.

A Princess known as the Mummy of the Screaming Woman

The Egyptian princess’ mummified body was found in the Royal Cache of Deir el Bahari in 1881. Hieratic inscriptions on the body’s linen wraps gave the woman’s identity as  “The royal daughter, the royal sister of Meret Amon”  in a way that was impossible for archaeologists to place her safely into a particular Pharaoh’s family tree; she was thus designated as “Mummy of the Unknown Woman A”. Still, the body created an impression due to its irregular position as well as its face showing signs of terror, pain, and opened mouth as if screaming (hence known as the “Mummy of the Screaming Woman”).

Experts and amateurs sought to draw comparisons to another mummy from the Royal Cache that appears to scream; an incompletely male body wrapped in sheepskin, who is possibly identified with Pentaweret, the son of Ramesses III who died in shame due to his active involvement to the Harem Conspiracy. Did the screaming woman also die due to a crime?

“No”, claim Dr. Zahi Hawass and Dr. Sahar Saleem who studied the woman’s mummy. Instead, as the CT study of the mummy revealed, severe atherosclerosis of the coronary arteries led to the sudden death of the Egyptian princess with a heart attack.

In particular, CT results indicate that “the Mummy of the Screaming Woman’” suffered from a severe degree of atherosclerosis which affected many arteries of the body. Atherosclerosis is a degenerative disease that progressively affects the arterial wall, leading to a narrowing of the cavity and blockage of the vessel, and can be determined in a CT scan as areas of high calcification within the arterial walls, which can be identified according to the location of the artery. Research has shown that the condition was not a rare one in ancient Egypt as many mummies still retain evidence of it.

In the case of the screaming mummy, a CT scan showed that she suffered from atherosclerosis of the right and left coronary arteries, neck arteries, abdominal aorta, and iliac arteries, as well as the arteries of the lower extremities. Cardiac diseases, especially coronary artery disease, are the leading cause of sudden death in adults nowadays in several clinical studies. In their study, Dr. Hawass and Dr. Saleem assume that ‘the Screaming Woman’ had a massive heart infarction resulted in sudden death.

In such conditions in modern medicine, clot-busting drugs and coronary angioplasty would have been indicated to prevent or limit damage to the heart muscle. But that was impossible in ancient Egypt. Instead, the Egyptians only knew of the final stage – heart attack – and how lethal was. The 3500-year-old ancient Egyptian medical papyrus, Ebers, describes what seems to be ‘heart attack’ and links it to death: ‘when you examine a man, who has pains in his stomach, who has pains in his arm and chest on the side of his stomach, wherefore one says: That is the wAD-sickness (heart attack?). Then you should say to that: Death is nearing him’.

Still, it seems that in the case of the “Screaming Woman”’s death, there was not even enough time for such speculation; she seems to have died suddenly while on her current body posture with flexed crossed legs.

But, if her death was a peaceful one, why the embalming process preserved her posture at the moment of death for nearly three thousand years?

As the team explains in an official press release, consequent to the princess’s sudden death, her head was tilted to the right side and her jaw dropped. Experts then assume that the dead body might not have been discovered until hours later, enough to develop death spasm. Stiffening of muscles and joints following death is termed death spasm (rigor mortis); it starts a few minutes to several hours postmortem. The contracted muscles become rigid without being able to relax until the body starts to decompose.

Researchers thus assume that that the embalmers likely mummified the contracted body of the princess before it decomposed or relaxed. The embalmers were thus unable to secure the mouth closed or put the contracted body in the state of lying down, as was usual with the other mummies, thus preserving her facial expression and posture at the time of death. The CT scan showed that the embalmers did not extract the mummy’s brain; the desiccated brain is seen in the skull cavity shifted towards the right because of the tilted head postmortem.

Previous scientific studies by Dr. Zahi Hawas and Dr. Sahar Saleem on The Egyptian Royal Mummies using CT scans helped to define the features of embalming in different Dynasties. This study suggests by observing the characteristics of the embalming method of the “Mummy of the Screaming Woman”, such as the lack of extraction of the brain, that the woman might have been Meret Amun, the daughter of King Seqenenre of the end of the 17th Dynasty (1558 – 1553 BC) rather than being Meret Amun the daughter of King Rameses II (1279-1213 BC) ) from the 19th Dynasty. Still, Hawass & Saleem plan to carry additional tests on the mummy in order to safely support the above assumption about the woman’s identity, with their Egyptian Mummy Project recommencing soon.