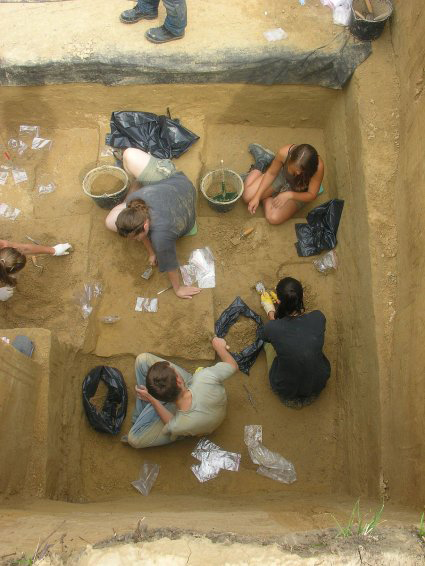 Rather than migrating to warmer areas

Ancient hunters stayed in the coldest part of Northern Europe rather than migrating to escape freezing winter conditions, archaeologists have found.

Evidence from Arctic fox bones show communities living around 27,500 years ago were killing small prey in the inhospitable North European Plains during the winter months of the last Ice Age.

Researchers have found no evidence of dwellings, suggesting people only stayed for a short time or lived in tents in the area excavated, Kraków Spadzista in Southern Poland – one of the largest Upper Palaeolithic sites in Central Europe. Until now it wasn’t clear if people retreated elsewhere each winter to avoid the intense cold.

Dr Alexander Pryor, from the University of Exeter, who led the study, said: “Our research shows the cold harsh winter climates of the last ice age were no barrier to human activity in the area. Hunters made very specific choices about where and when to kill their prey.”

Inhabitants of Kraków Spadzista around 27,500 years ago killed and butchered large numbers of woolly mammoths and arctic foxes at the site. For the first time, the research team were able to reconstruct details of how the foxes were moving around in the landscape before they died, and also what time of the year they died, through analysing the internal chemistry and growth structures of their tooth enamel and roots.

The analysis of teeth from four of the 29 hunted foxes show each was born and grew up in a different location, and had migrated tens or hundreds of kilometres to the region before being killed by hunters – by snares, deadfalls or other trapping methods – for both their thick warm furs as well as meat and fat for food. The carcasses were brought back to the site to be skinned and butchered.

Analysis of the dental cementum of at least 10 fox individuals demonstrate that the majority were killed between late winter and late spring, most likely in late winter. The foxes ranged in age, from sub-adult to very old.

Around 2,400 arctic fox bones were found about 30m south of a huge concentration of bones from more than 100 individual woolly mammoths that dominate the site, in an area used for the production of lithic tools and the processing of smaller prey animals.

The study suggests the Arctic fox colonised the area because they moved over long distances season by season, something they still do today, in order to find food.

Dr Pryor said: “Arctic fox provided both food and hides to Palaeolithic hunters, with their fur coats reaching full length around the beginning of December; this winter fur usually begins shedding by early spring. They also lay down substantial stores of body fats seasonally that are greatest from late autumn throughout the winter season and do not start to become seriously depleted until early spring. Hunters most likely targeted the foxes in the late winter period – before the onset of fur shedding and loss of critical fat supplies.

“The high numbers of fox remains found at the site suggests what was happening was a deliberate, organised procurement strategy rather than just simple incidental hunting.”

The analysis of teeth suggests hunters engaged in large-scale winter hunting of solitary Arctic foxes that were ranging widely across the landscape. The site was used as a base camp for ranging visits to maintain trapping lines and for processing hides.

Krakow Spadzista was one of the most northerly sites in central Europe during the Late Gravettian when much of the northern plains region had already been abandoned. Mean annual temperature was between -1.0 °C and +4.3 °C.