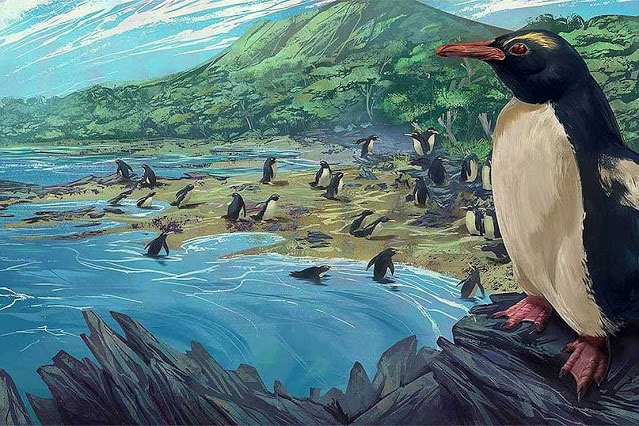 New Zealand is surrounded by highly productive oceans that attract seabirds from around the world, forming a global hotspot for seabird diversity. Establishing how and when this hotspot formed has been challenged by a lack of fossil discoveries connecting New Zealand’s living seabirds to their ancient relatives.

The newly described three-million-year old dawn crested penguin Eudyptes atatu from Taranaki now provides a crucial connection to the past, confirming crested penguins, and perhaps other types of seabird, have been living in Zealandia, or the New Zealand continent Te Riu-a-Māui, for millions of years.

“This has been an exciting research collaboration to be part of,” Daniel Thomas from the School of Natural and Computational Sciences at Massey University says.

“It’s given us an important into the evolution of crown penguins and re-enforces the importance of the New Zealand continent for seabird evolution. Our growing fossil record suggests that Zealandia was an incubator of penguin diversity in which the first penguins likely evolved and later dispersed throughout the Southern Hemisphere. The name of the newly described penguin species Eudyptes atatu comes from a contraction of ata tū, which is ‘dawn’ in Te Reo Maori. Dawn references the fact that this species is the beginning of our knowledge for crested penguins in New Zealand.”

The research is published in the Proceedings of the Royal Society B.