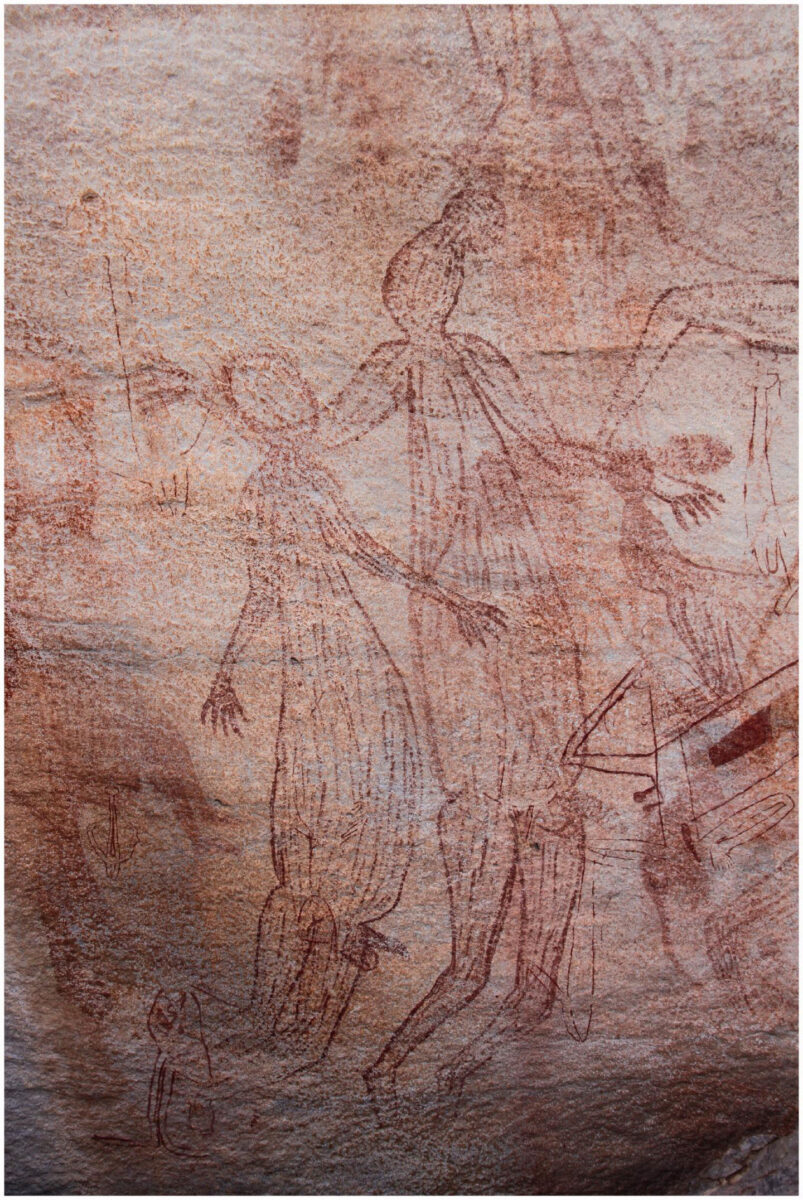 Stunning Arnhem Land rock art images including three rare depictions of bilbies and a dugong have been described by researchers in a new paper in Australian Archaeology today (Oct 1).

Named Maliwawa Figures, they are found in northwest Arnhem Land and recorded at sites from Awunbarna (Mount Borradaile area) to the Namunidjbuk clan estate of the Wellington Range.

The Maliwawa images include large (over 50cm high, sometimes life-size) naturalistic humans and macropods with animals more often depicted than human figures. Painted in various shades of red with stroke-infill or outline forms with a few red strokes as infill, they are shown with little material culture other than various forms of headdresses.

Professor Taçon said the rock art provided a window into the past and showed us what people were doing at this time. “They’re a missing link between the well-known early-style Dynamic Figures, about 12,000 years of age, and X-ray figures made in the past 4000 years.”

“Maliwawas are depicted as solitary figures and as part of group scenes showing various activities and some may have a ceremonial context. Human figures are frequently depicted with animals, especially macropods, and these animal-human relationships appear to be central to the artists’ message,” he said.

He also said the Maliwawa Figures and scenes were not just simple depictions of everyday life.

“The artists are clearly communicating aspects of their cultural beliefs, with an emphasis on important animals and interactions between humans and other humans or animals.

Professor Taçon said in some images animals almost appeared to be participating in or watching some human activity.

“This occurrence, and the frequency and variability of headdresses, suggests a ritual context for some of the production of Maliwawa rock art.

Co-author Dr Sally K. May from Griffith University’s Place, Evolution and Rock Art Heritage Unit said the discovery of what appear to be depictions of ‘bilbies’ at an Awunbarna site was surprising.

“Bilbies are associated with arid and semi-arid environments far to the south and Arnhem Land has not been within their range in historic times,” she said.

“Two of these animals are back-to-back and almost identical in size. The third bilby-like depiction appears to have been made at a different time, and perhaps by a different artist, as it is larger, has a longer snout, has more line infill, and is in a lighter shade of red.

“There is also the possibility that the depictions are of Agile Wallabies, Northern Nailtail Wallabies or Short-eared Rock-wallabies, all widespread across Kakadu-Arnhem Land today, but all of these species have much shorter ears and snouts than extant bilbies and the creatures depicted at Awunbarna.”

The researchers also recorded the oldest know depiction of a dugong.

“The solitary dugong painting also seems out of place,” Dr May said.

“Today it is located about 15 kilometres south of the Arafura Sea but 6000-9400 years ago the coast would have been further north. It indicates a Maliwawa artist visited the coast but the lack of other saltwater fauna may suggest this was not a frequent occurrence.”

“The Maliwawa back-to-back figures are the oldest known for western Arnhem Land and it appears this painting convention began with the Maliwawa style. It continues to the present with bark paintings and paintings on paper,” Professor Taçon said.

“But was the Maliwawa rock art sporadic and made during a short time period or did it continue over a long period of time?

He said they could not rule out the possibility that Maliwawa rock paintings were produced by a small number of artists. It is even possible only a couple artists made most of the paintings, with one responsible for the more outline forms with minimal infill and another creating much of the fuller stroke-line infill examples.

“At the same time, much art produced after the Maliwawa style demonstrates a remarkable consistency in the manner of depiction and a significant increase in the standardisation of some subject matter such as X-ray fish.

“So, perhaps what we are observing is increasing standardisation in the manner of depiction after the period in which Dynamic Figures were made. This has implications for rock art research everywhere in which a style or manner of depiction is suggested to have been made over hundreds of years or millennia.”