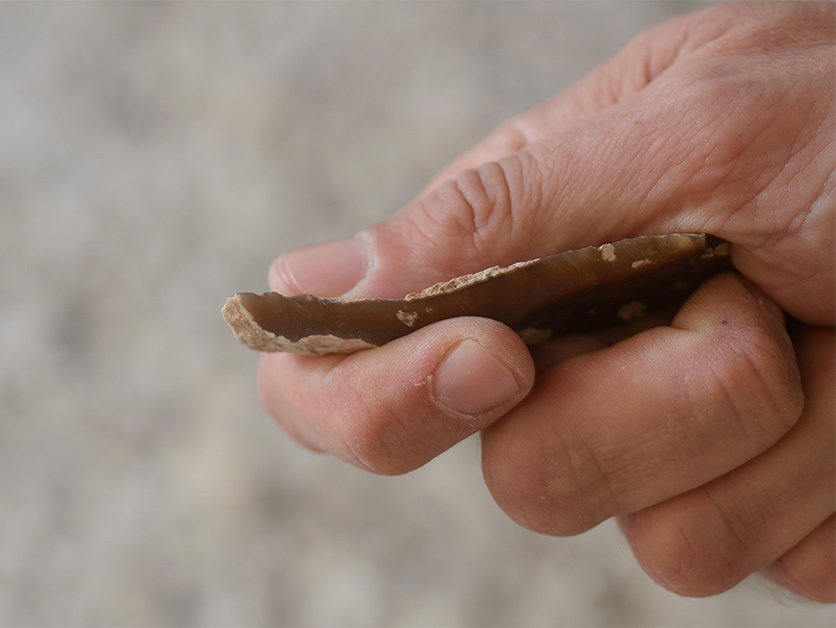 Human ancestors not only knew how to use fire, they also developed sophisticated technologies for making tools. Researchers at the Weizmann Institute of Science recently employed cutting-edge technologies of their own to take a fresh look at a collection of stone tools. Their results suggest that the early humans who made them may have had a good understanding of the effects of heating the stone before flaking it into blades, and they may even have used different temperatures to create different types of tools.

Qesem Cave, a site in Central Israel, was excavated by Prof. Avi Gopher and colleagues in Tel-Aviv University. The findings in the cave are dated to between 420,000 and 200,000 years ago, or the Lower Paleolithic, and it is assigned to the unique Acheulo-Yabrudian Cultural Complex. The ancient hominins (a group including us and the extinct members of our family tree), who lived in Qesem Cave, left behind them tens of thousands of stone tools. These tools are mainly made of flint, a material which is readily available all over the country, and they were produced in a process called knapping—that is, using another rock or tool to chip off pieces, honing a sharp edge.

Somewhere between 300,000-400,000 years ago, the main prey these hominins hunted had changed—from elephants, to fallow deer—necessitating a switch in the toolkit used, towards finer artifacts. The question asked by the Weizmann research group was whether the ancient inhabitants of the area might have used fire to temper the flint before knapping it. Much later groups—less than 100,000 years ago, had left evidence of firing their flint, which makes the stone easier to shape. However, in sites of this age, there is generally almost no remaining organic matter that can currently give researchers conclusive evidence of fire use.

The first challenge in trying to understand whether flint has undergone any structural change, such as fire can produce, explains Dr. Filipe Natalio of the Institute’s Scientific Archeology Unit, is that the structure of raw flint can vary from site to site and from piece to piece, depending on the geological conditions in which it formed. And the traces of past heating in solid rock would be mostly microscopic or smaller—basically invisible. To approach this hurdle, he and postdoctoral fellow Dr. Aviad Agam, who specializes in prehistoric archeology, turned to Dr. Iddo Pinkas, who is an expert in a technique known as Raman spectroscopy in the Institute’s Chemical Research Support Department.

The group first collected flint from areas near Qesem Cave as well as other places around the country. After heating the flint pieces to different temperatures and cooling them again, the researchers examined them with the tools in Pinkas’s spectroscopy lab, which revealed the makeup of these rocks down to their chemical and molecular structure.

But the experiment yielded vast amounts of data—too large to analyze with regular methods. So the group turned to Dr. Ido Azuri, who is in the Institute’s Bioinformatics Unit, in the Life Sciences Core Facilities Department. Azuri is an expert in machine learning and artificial intelligence, so despite the departure from his normal biological research, finding patterns in large amounts of data was right up his alley. Indeed, he was delighted to find that not only could the spectroscopy data be analyzed through machine learning methods so as to sort out the changes caused by baking the rocks, this method could find the temperature range in which each had been heated.

Next, the group applied the spectroscopy and AI analysis to randomly chosen samples from the thousands of pieces of ancient knapped flint excavated from Qesem Cave by archeologist Prof. Avi Gopher of Tel Aviv University. Azuri then took this new data and evaluated the temperatures to which the early humans heated the ancient knapped flints by the model he had originally created.

“At first,” says Natalio, “the data seemed to be all over the place, and we did not know if we could say anything about these tools. But then Azuri created his model, and things just fell into place.”

A distilled version of the findings compared three different types of flint artifacts, and it revealed three unique temperature ranges one for each kind. The first type, which the scientists call pot-lids, were small, nicked and chipped shards, and the analysis showed they had been exposed to fire hot enough to cause pieces of the flint to fly off of their own accord. That told the team their analysis was on the right track, as very high heat—up to 600 degrees Celsius—had been suggested, in other studies, to create the nicks and chips.

The second type of pieces are known as flakes; and the third are the blades—larger, knife-like tools with one long sharp edge and a facing, thicker edge where they can be held. Flakes, essentially smaller cutting tools than the blades, had been treated at a relatively large range of temperatures while the blades had been heated to lower temperatures (some 200-300 degrees—low-to-medium oven settings) and the temperature range they had undergone was much smaller. In other words, it appeared as though the cave’s inhabitants had intentionally used different heat-treatments to create different tools.

“We can’t know how they taught others the skill of toolmaking, what experience led them to heat the raw flint to different temperatures, or how they managed to control the process, but the fact that the longer blades are consistently heated in a different way than the other pieces does point to an intent,” says Natalio.

“And that,” adds Pinkas, “is technology, as surely as our cell phones and computers are technology. It enabled our ancestors to survive and thrive.”

The findings of this research are published in Nature Human Behavior.