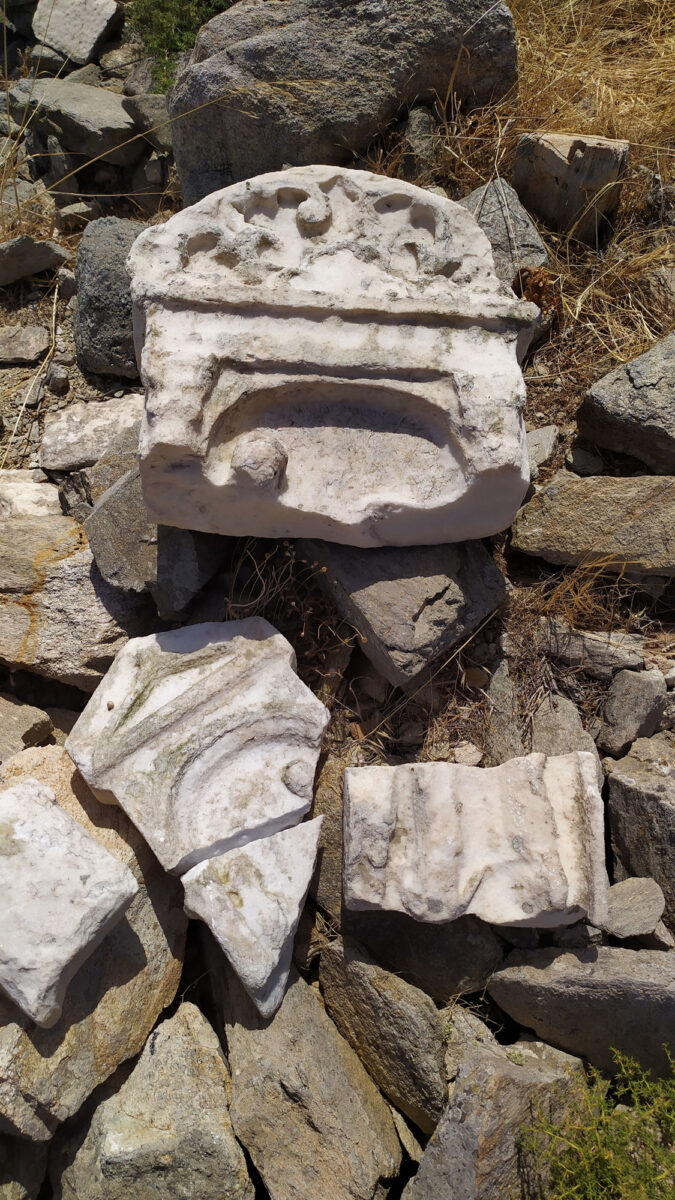 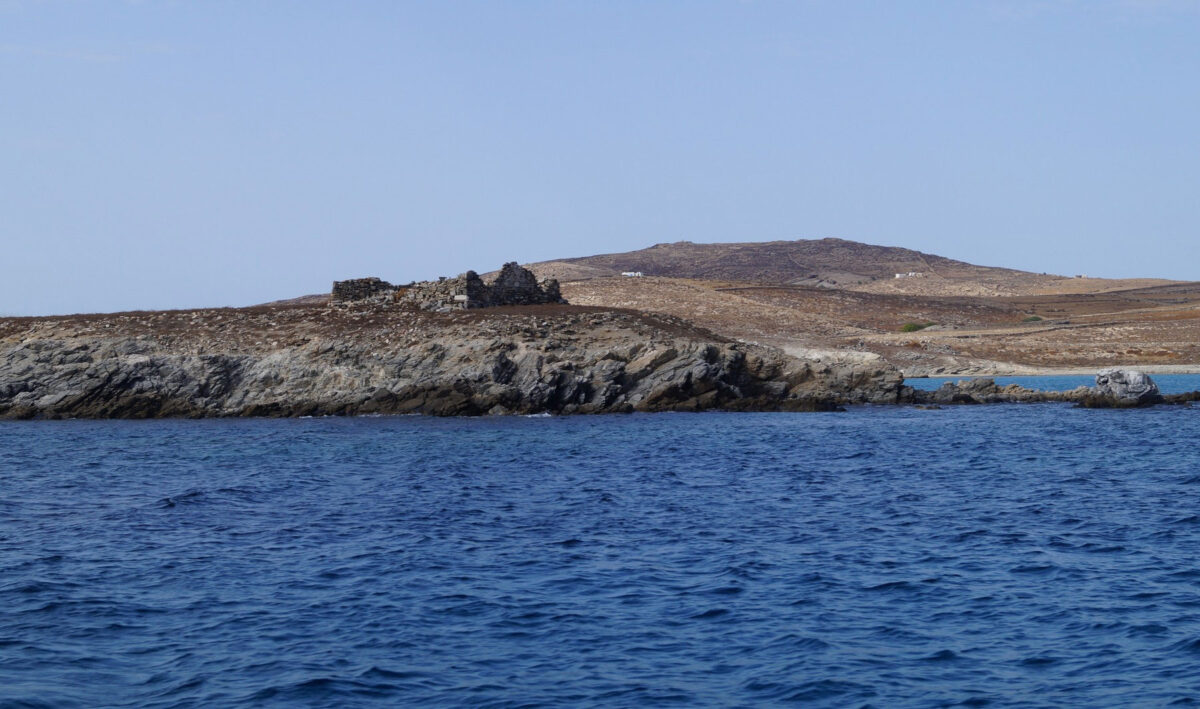 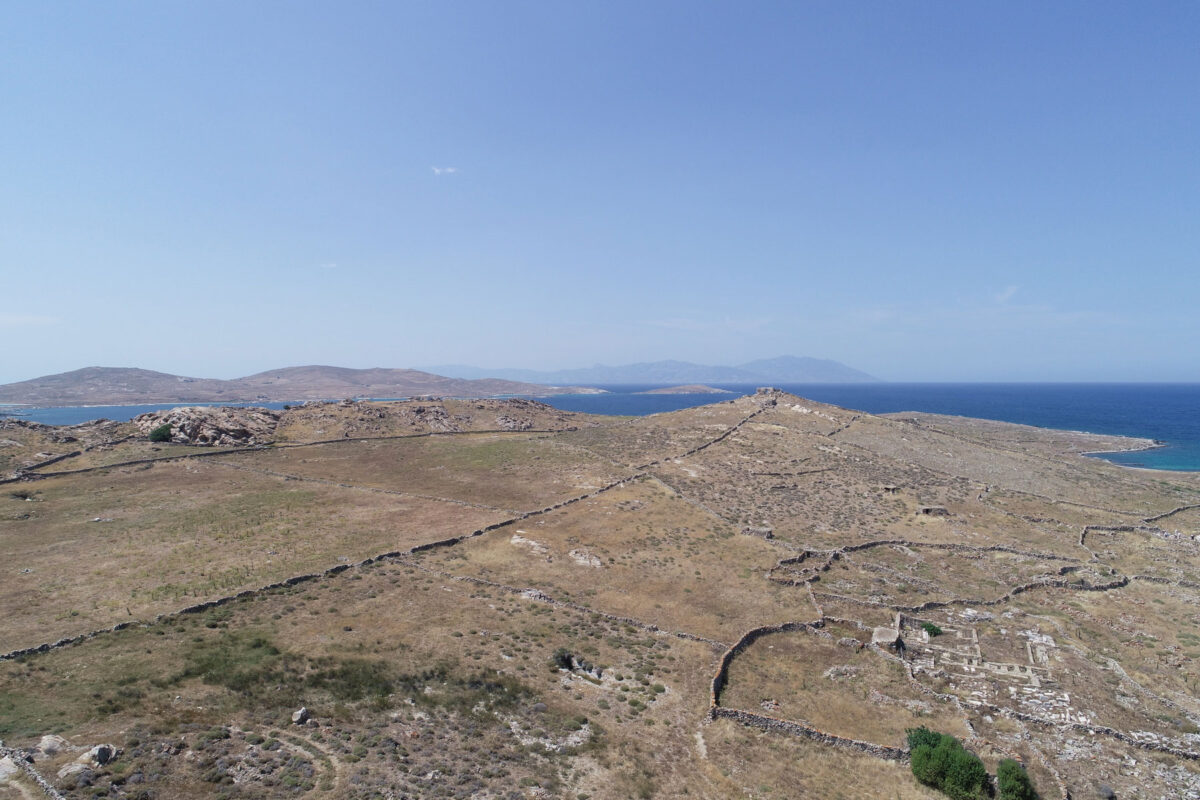 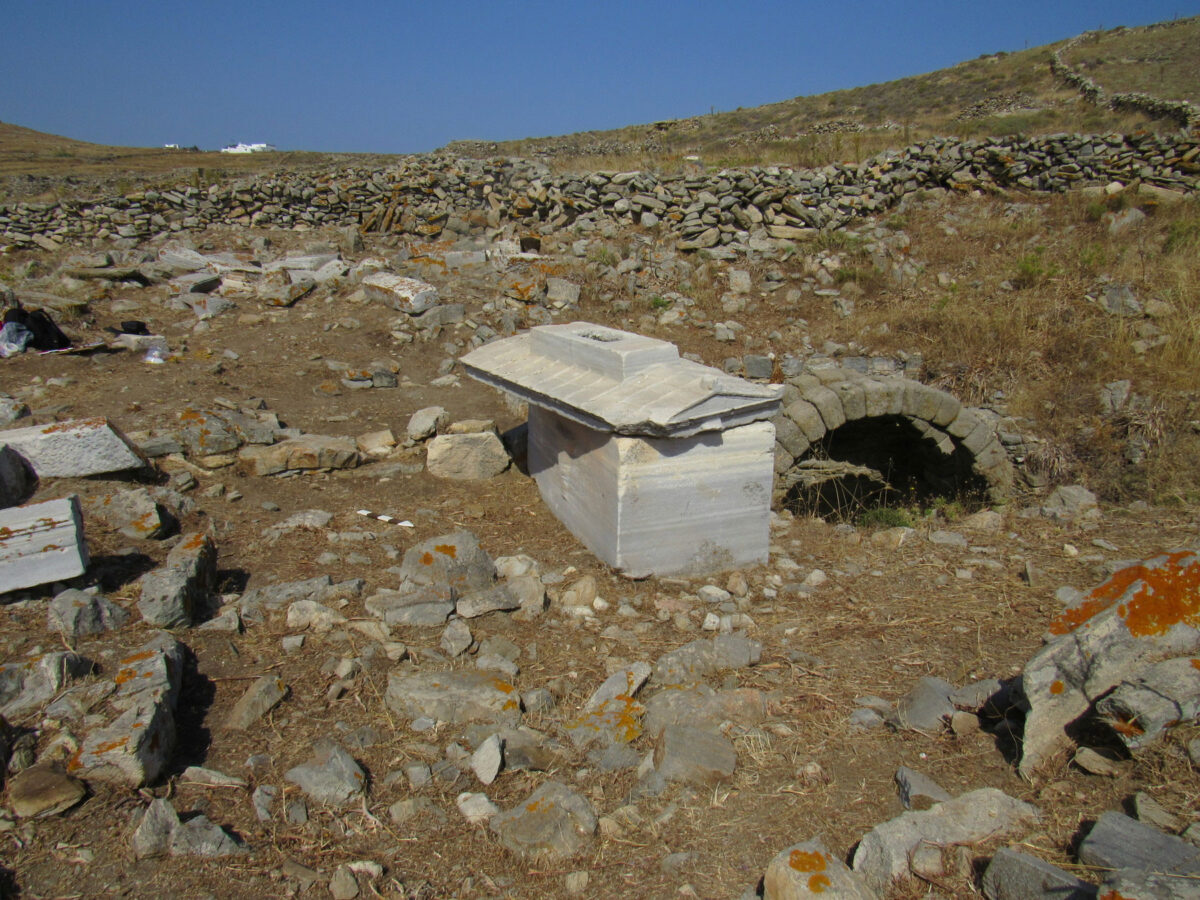 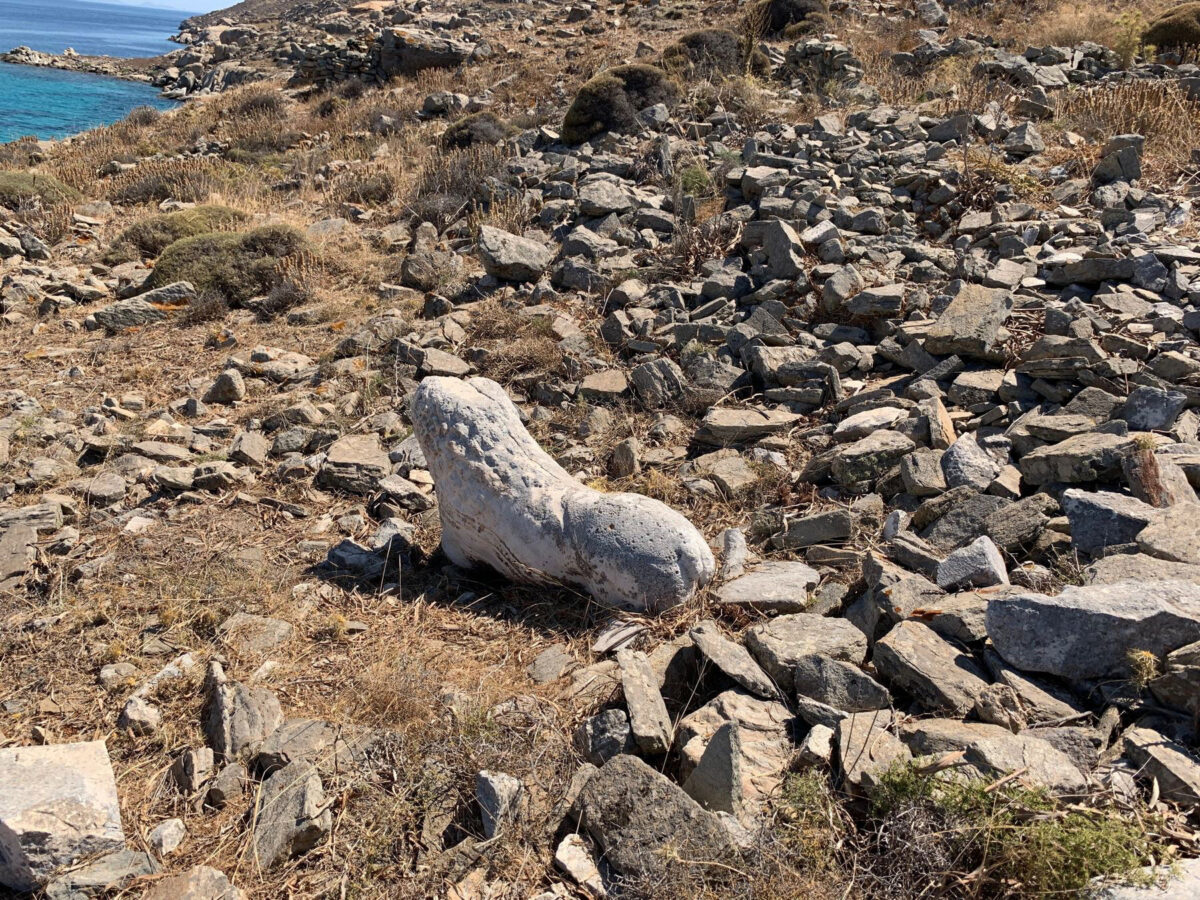 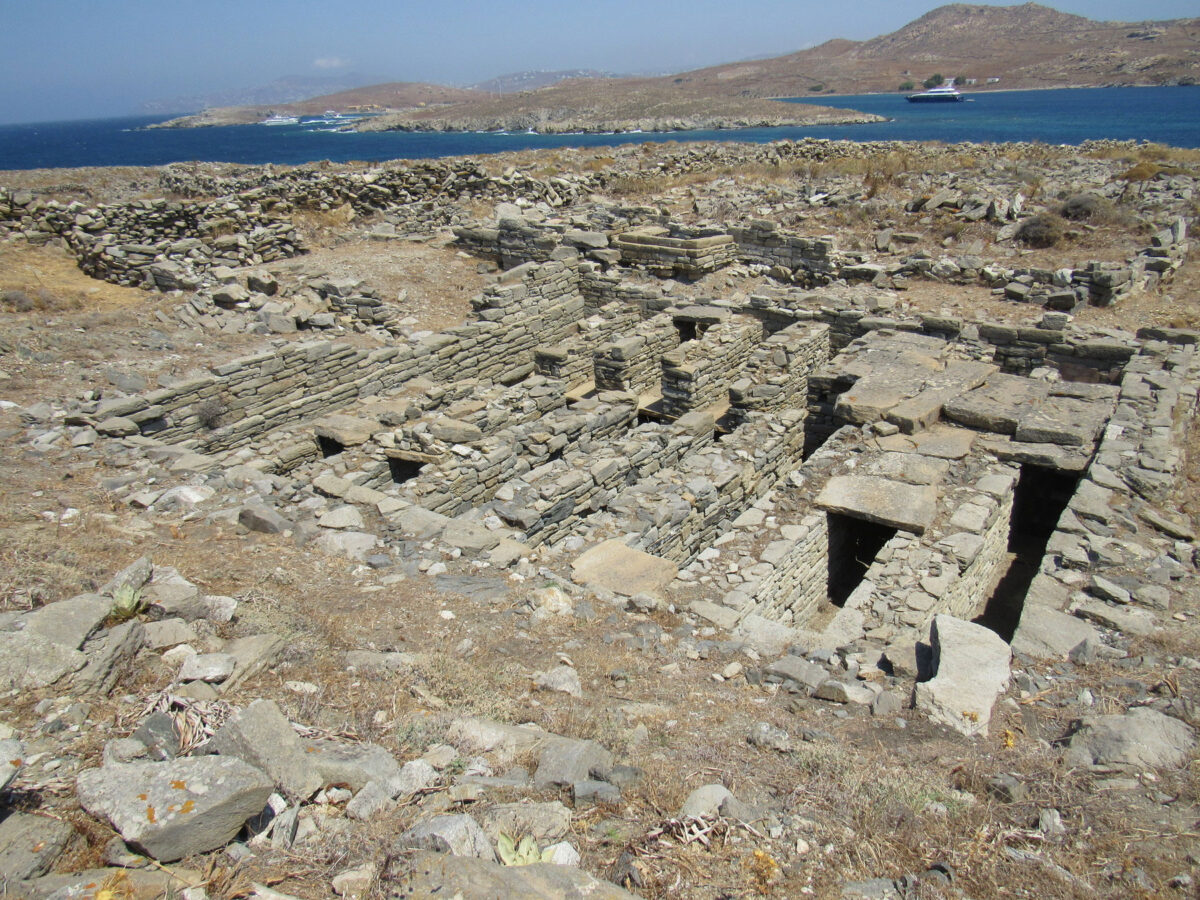 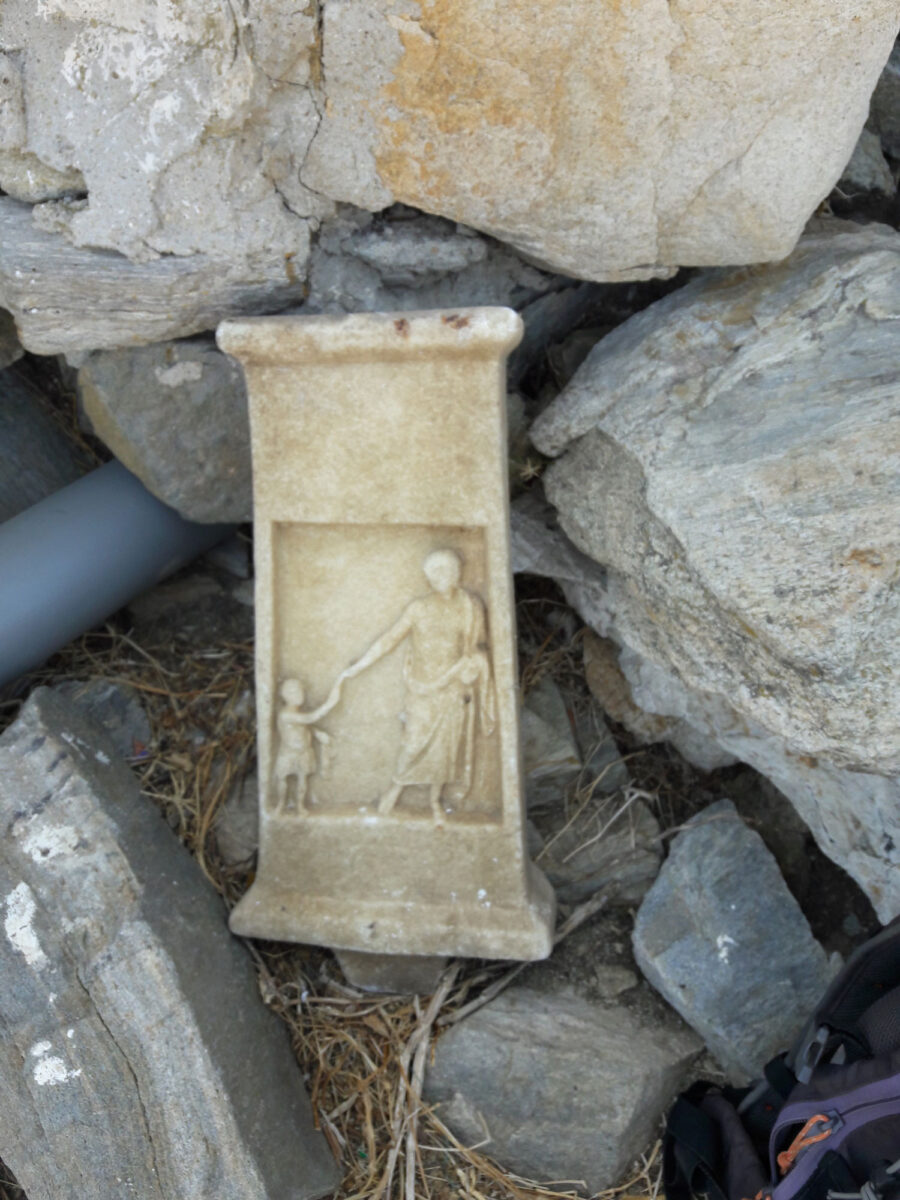 The five year fieldwork programme of the Cyclades Ephorate of Antiquities

Rheneia, a small island next to Delos, associated with the history of the births and deaths of its famous neighbouring island, but which also served as a place of quarantine up to the 19th and early 20th centuries, is the focus of the five-year fieldwork programme of the Cyclades Ephorate of Antiquities, which began in 2019.

Rheneia (or “Megales Deles” / “Great Deles” as it is called by the people of Mykonos, a name indicating the timeless link between the two islands) is nowadays divided into “lots,” ie into rural areas which the Municipality of Mykonos leases to Mykonians for agricultural and livestock use.

In antiquity Rheneia had been a place with a strange history. Also known as Ortygia, according to legend it was the birthplace of Apollo’s twin sister Artemis. The southern part, (“Kato Deles”) belonged to the territory of ancient Delos and functioned as its inhabitants’ place of birth and death. In the same part, the sanctuary of Delios Apollo owned agricultural land that was leased to private individuals, making large profits, according to Delian inscriptions. It also had a sanctuary dedicated to Artemis. In the northern part of Rheneia (today’s “Epano Deles”), was the city of Rheneia, with its cemeteries, farmhouses, numerous sources of wealth and its sanctuaries.

Limited but important excavations on Rheneia, were made in the late 19th and early 20th century by the first two Curators of Cyclades Antiquities, Dimitrios Stavropoulos and Dimitrios Pippas, who, however, did not manage to complete the documentation of their findings. On the spot excavations and works in the Delian necropolis and the city of Rheneia were later carried out by the former 21st Ephorate of Prehistoric and Classical Antiquities as well as the French School of Archaeology.

Stavropoulos began exploring the east coast of southern Rheneia in 1898. The antiquities had been looted for centuries by gravediggers, so that today one can find Rheneian grave steles not only in Greek museums but also in museums and collections abroad; Venice, Verona, London, Oxford, Cambridge, Paris, Vienna, Oslo, Odessa, St. Petersburg and Copenhagen.

Stavropoulos excavated tombs, revealing part of “this unique city of births and deaths”. His guide was the famous passage from the third book of Thucydides’ Histories which describes how the Athenians, in the winter of 426/5 BC, proceeded with a complete cleansing of Delos (a first, partial cleansing had already been carried out by Peisistratos) “lifting all the dead and their coffins from Delos, ordering from now on that no one should die or be born on the island, but that the dying and the women about to go into labour should be transported to Rheneia”.

Stavropoulos hoped to find the old Delian burials in Charoneia, the ancient necropolis of Delos as named by the inscriptions and he was justified when the famous “purification pit” was located in the bay of Agia Kyriaki. The hundreds of vases that came to light and belonged to burials of at least 4 centuries (8th-5th century BC), along with the numerous burial steles, led to the founding of the Museum of Mykonos, one of the oldest in Greece.

120 years after the first excavations, the Cyclades Ephorate of Antiquities with the means offered by modern technology, returns to Rheneia both to complete the documentation of the old excavations and the centuries-old looted remains of the ancient Delian necropolis and to conduct a rigorous surface survey throughout the island, to locate, document and analyse all archaeological sites and ruins, geologically recognize Rheneia and excavate a site on its southern part. Rheneia’s limited area combined with its lack of human habitation over such long periods and the abundant information provided by Delian inscriptions make the island ideal for such research.

Near the Delian necropolis, the field was cleared where the big sarcophagus of the Roman matron Tertia Horaria and the large lion of Rheneia are situated, so as to document the numerous visible burial structures and the many marble architectural members, altars, sarcophagi etc. Further north, the already excavated, large underground funerary building with niches (columbarium) was cleaned and mapped, as well as the remains of a domed tomb finial that bears great similarities with the single dome of the Agora of the Competaliasts on Delos. All the antiquities were documented by orthophotography and the visible remains were registered in a programme of geographical information with a prospectus in each monument, while for security reasons small sections mainly of steles in relief were collected and taken to Delos.

As part of the surface survey, the ruins of ancient farmhouses belonging to the sanctuary of Delios Apollo as well as an unknown ancient road were located and documented.

At the same time, excavations began at Chomasovouni, an important place on the edge of the Delian necropolis, with visible impressive marble architectural members and foundations of a building, in direct visual contact with Delos. This is probably the site of the Artemision “on the island,” the important Delian sanctuary. According to accounts of the Delians in charge of the sacred rites, an uphill path led to the sanctuary, which apart from the temple included an altar, a dining hall and houses. Cleaning of the site was carried out as were orthophotography, topography and mapping of the architectural remains, while at the same time the clearing of trees and shrubs and an intensive surface survey were conducted all over the hill. Near the top, where the site of the temple is thought to be, part of a foundation was unearthed, probably that of a large altar. Remarkable fragments of sculptures were collected from the same place, mainly parts of bird statues, which were taken to Delos.

A geological map of the island was made as part of the same research, aiming among other things to locate the quarry sites. The research yielded very interesting results relating to the origin of the buildings’ structural material, not only of Rheneia but of Delos also, such as e.g. the foundations of the temple of Apollo.

An important aspect of the research is the documentation of all the remains of Byzantine, post-Byzantine and modern times (farmhouses, “pits”, dry stone walls, chapels, etc.). Among them, relevant today, are the ruins of the public quarantine station of Delos (Rheneia) on the beach, with the eloquent toponym Karantina/Quarantine or Lazaretto. From the mid 19th to the early 20th century during outbreaks of cholera and plague epidemics, both infected and non-infected ships sailing from Mediterranean to Greek ports remained there in quarantine (preventive or real), mandatory for 5-40 days. In fact, Konstantinos Cavafy spent two days there in 1901 on his first trip to Greece. The documentation facts are included in Rheneia’s cartographic background and combined with the recording of toponyms and information on modern traditions as well as interdisciplinary research into the archive of the Municipality of Mykonos, the Historical Archive of the Service and the General State Archives, provide extremely useful material for land uses through history in a landscape barely built up since antiquity, further documenting  both the special importance of Rhineia and the need for it to remain untouched by newer interventions.

The research programme is realized by the Cyclades Ephorate of Antiquities, under Dr. Dimitris Athanasoulis, Dr. Zozi Papadopoulou and Dr. Maria Sigala and financially supported by the Municipality of Mykonos.