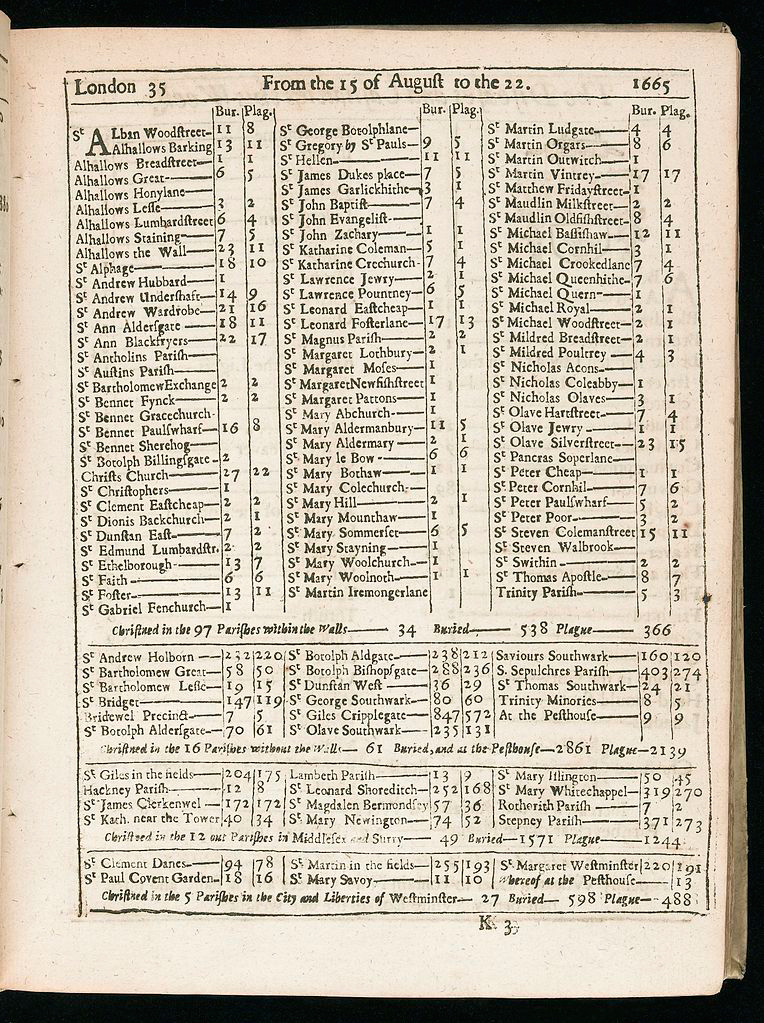 Based on personal wills and testaments of people

McMaster University researchers who analyzed thousands of documents covering a 300-year span of plague outbreaks in London, England, have estimated that the disease spread four times faster in the 17th century than it had in the 14th century.

The findings, published today in the Proceedings of the National Academy of Sciences, show a striking acceleration in plague transmission between the Black Death of 1348, estimated to have wiped out more than one-third of the population of Europe, and later epidemics, which culminated in the Great Plague of 1665.

“It is an astounding difference in how fast plague epidemics grew,” says David Earn, a professor in the Department of Mathematics & Statistics at McMaster and investigator with the Michael G. DeGroote Institute for Infectious Disease Research, who is lead author on the study.

Earn and a team including statisticians, biologists and evolutionary geneticists estimated death rates by analyzing historical, demographic and epidemiological data from three sources: personal wills and testaments, parish registers, and the London Bills of Mortality.

It was not simply a matter of counting up the dead, since no published records of deaths are available for London prior to 1538. Instead, the researchers mined information from individual wills and testaments to establish how the plague was spreading through the population.

“At that time, people typically wrote wills because they were dying or they feared they might die imminently, so we hypothesized that the dates of wills would be a good proxy for the spread of fear, and of death itself. For the 17th century, when both wills and mortality were recorded, we compared what we can infer from each source, and we found the same growth rates,” says Earn. “No one living in London in the 14th or 17th century could have imagined how these records might be used hundreds of years later to understand the spread of disease.”

While previous genetic studies have identified Yersinia pestis as the pathogen that causes plague, little is known about how the disease was transmitted.

“From genetic evidence, we have good reason to believe that the strains of bacterium responsible for plague changed very little over this time period, so this is a fascinating result,” says Hendrik Poinar, a professor in the Department of Anthropology at McMaster, who is also affiliated with the Michael G. DeGroote Institute for Infectious Disease Research, and is a co-author on the study.

The estimated speed of these epidemics, along with other information about the biology of plague, suggest that during these centuries the plague bacterium did not spread primarily through human-to-human contact, known as pneumonic transmission. Growth rates for both the early and late epidemics are more consistent with bubonic plague, which is transmitted by the bites of infected fleas.

Researchers believe that population density, living conditions and cooler temperatures could potentially explain the acceleration, and that the transmission patterns of historical plague epidemics offer lessons for understanding COVID-19 and other modern pandemics.

This new digitized archive developed by Earn’s group provides a way to analyze epidemiological patterns from the past and has the potential to lead to new discoveries about how infectious diseases, and the factors that drive their spread, have changed through time.