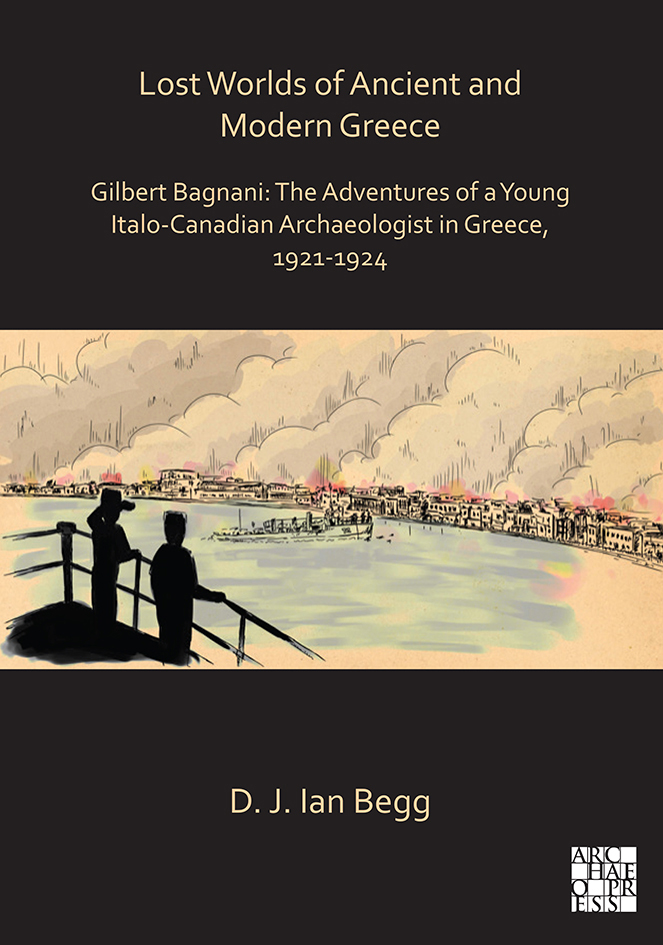 By day, young Gilbert Bagnani studied archaeology in Greece, but by night he socialised with the elite of Athenian society. Secretly writing for the Morning Post in London, he witnessed both antebellum Athens in 1921 and the catastrophic collapse of Christian civilisation in western Anatolia in 1922. While there have been many accounts by refugees of the disastrous flight from Smyrna, few have been written from the perspective of the west side of the Aegean. The flood of a million refugees to Greece brought in its wake a military coup in Athens, the exile of the Greek royal family and the execution or imprisonment of politicians, whom Gilbert knew.

Gilbert’s weekly letters to his mother in Rome reveal his Odyssey-like adventures on a voyage of discovery through the origins of western civilisation. As an archaeologist in Greece, he travelled through time seeing history repeat itself: Minoan Knossos, Byzantine Constantinople and Ottoman Smyrna were all violently destroyed, but the survivors escaped to the new worlds of Mycenaean Greece, Renaissance Venice and modern Greece.

At Smyrna in the twentieth century, history was written not only by the victors but was also recorded by the victims. At the same time, however, the twentieth century itself was so filled with reports of ethnic cleansings on such a scale that the reports brutalized the humanity of the supposedly civilized people reading about them, and the tragedy of Smyrna disappeared from public awareness between the cataclysmic upheavals of the First and Second World Wars.

Ian Begg studied archaeology in Greece at the America School of Classical Studies in Athens. For this book, the author retraced Gilbert Bagnani’s footsteps around Greece, the Aegean, Turkey and Libya. He has not only participated in excavations in Sicily, Greece, Crete and Egypt but also initiated a survey on the island of Karpathos especially for the chapter in this volume.

Gilbert Bagnani, the subject of Ian Begg’s book, was unknown to me, and I am glad to have made his acquaintance. The book covers the period 1921-1924. Gilbert comes across as a fascinating character, who encountered the Levant at a critical time for both the Greece of Eleftherios Venizelos and the Turkey of Mustapha Kemal Atatürk. He was bilingual in Italian (from his father) and English (from his mother): an archaeologist but always more than that. He knew and was helped by the excellent William Miller, which led to his contributing incisive articles about the politics of Greece and the Levant to the Morning Post in London. As a member of the Italian School of Archaeology in Athens he travelled around Greece and the islands and found himself in Asia Minor at a critical phase of the Greek occupation and Kemal’s war of independence. All this and much more is described in Gilbert’s letters to his mother. His grasp of local and international politics was impressive. He and Begg paint sparkling pen pictures of personalities such as Bosdari, the Italian ambassador during the Great War, and later Governor of the Dodecanese, Prince Demidoff the Russian ambassador, Harold Lamb the British Consul at Smyrna and family, Greek personalities such as Stratos, Kalapothakis, Karapanos, and colleagues at the Italian School. Gilbert emerges as clever, sometimes arrogant, fascinated by people especially from high society, and with a weakness for royalty. Begg does him justice in a well sourced book. This is a lively account of a formidable personality, scholar and archaeologist in the making. The black and white photographs by Gilbert himself are excellent. (Sir Michael Llewellyn Smith, British Ambassodor to Greece 1996–1999)

Gilbert Bagnani, of Italian and Canadian extraction, arrived in Greece at the age of 21, already well-connected through his parents’ social and professional circles. He was ostensibly studying Greek Archaeology and participating in fieldwork, research and assisting with educational trips for the Italian and other Western archaeological institutes in Athens. However, secretly, he was sending well-informed reports on the dynamic political situation in Greece and between Greece and Turkey to a London newspaper, while later spying for Mussolini. This first of three volumes based on his personal letters and news’ reports covers the momentous years from 1921-1924, which witnessed the disastrous failure of the Greek invasion of Western Turkey, the sack of Smyrna, a military coup and executions in Greece. We are also treated to highly-entertaining sketches of leading archaeologists in Greece, and the way fieldwork was conducted, as well as the social life of the political class and wealthy elite of Athens – into which, despite his youth, he quickly found a niche, thanks to his family connections and obvious social graces. Informative, excellently-edited and a delight to read. (Professor John Bintliff, Edinburgh University)