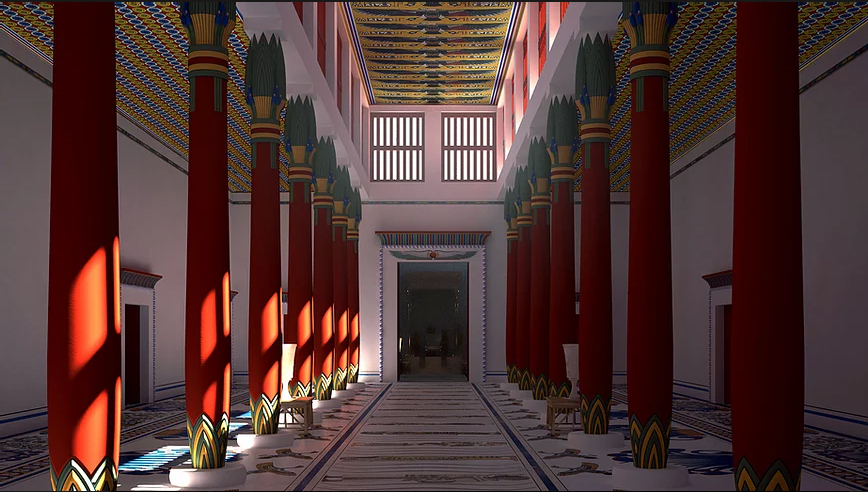 How did Amenhotep III’s Malqata Palace look like? Will we ever be able to walk through it, wander around its many rooms and even stand before the throne? In a way, yes, claims ancient Egyptian architecture specialist Franck Monnier (Associate researcher, CNRS-UMR 7041, ArScAn, Scientific consulting and Illustrator) who conducts a project aiming at the virtual reconstruction of the palace, whose remains still survive on Nile’s West Bank opposite Luxor.

Back in 2016, Monnier together with Paul François (Research Engineer at the Laboratoire d’Archéologie Médiévale et Moderne en Méditerranée) achieved in partially reconstructing the palatial complex of Amenhotep III at Malqata. The project was Within the framework of a collaboration with the Ancient Egyptian Heritage and Archaeological Fund, a foundation directed by Egyptologist Peter Lacovara. As explained on the project’s page, during this first phase of the project, experts focused on the Palace’s hypostyle hall and the throne room to which it leads. This work led to very realistic views and a short virtual tour.

Based on the work already done, Monnier now intends to offer more details and realism with new views and virtual tours (using 3D-glasses). According to a statement he shares at The Egyptologists’ Electronic Forum, he now aims at finalizing the view of the Pharaoh’s throne and canopy surrounding it by applying rich polychromy and finally set it in its close environment (throne room with columns, decorations, and contemporary lamps). Then, he aims at adding the large columned hall to it. In the end, the entire palace and its surroundings will be reconstructed. The produced works will be available for free and in open-access on the website of the project.

To proceed, the project is raising funds through an ongoing campaign, where anyone is free to donate. To contribute, please click here.