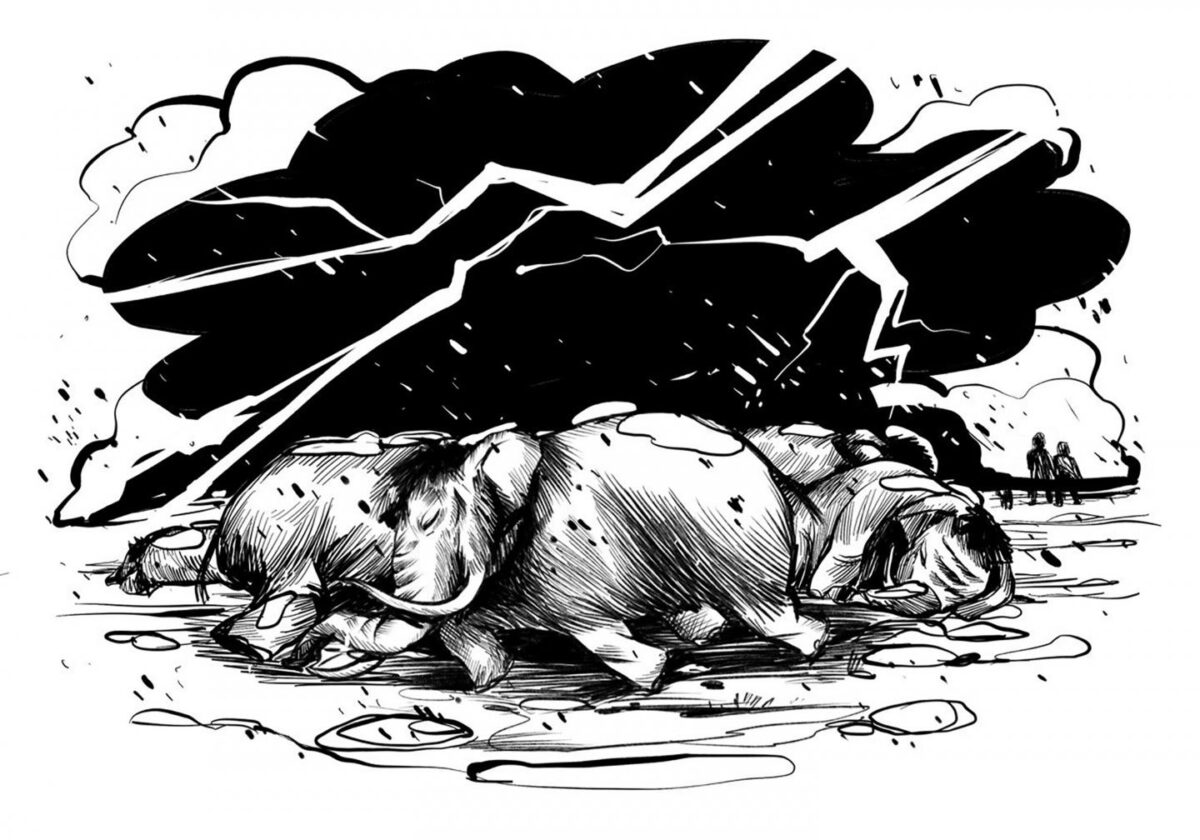 Climate change and the extinction of North America’s largest animals

A new study published in Nature Communications suggests that the extinction of North America’s largest mammals was not driven by overhunting by rapidly expanding human populations following their entrance into the Americas. Instead, the findings, based on a new statistical modelling approach, suggest that populations of large mammals fluctuated in response to climate change, with drastic decreases of temperatures around 13,000 years ago initiating the decline and extinction of these massive creatures. Still, humans may have been involved in more complex and indirect ways than simple models of overhunting suggest.

Before around 10,000 years ago, North America was home to many large and exotic creatures, such as mammoths, gigantic ground-dwelling sloths, larger-than-life beavers, and huge armadillo-like creatures known as glyptodons. But by around 10,000 years ago, most of North America’s animals weighing over 44 kg, also known as megafauna, had disappeared. Researchers from the Max Planck Extreme Events Research Group in Jena, Germany, wanted to find out what led to these extinctions. The topic has been intensely debated for decades, with most researchers arguing that human overhunting, climate change, or some combination of the two was responsible. With a new statistical approach, the researchers found strong evidence that climate change was the main driver of extinction.

Since the 1960’s, it has been hypothesized that, as human populations grew and expanded across the continents, the arrival of specialized “big-game” hunters in the Americas some 14,000 year ago rapidly drove many giant mammals to extinction. The large animals did not possess the appropriate anti-predator behaviors to deal with a novel, highly social, tool-wielding predator, which made them particularly easy to hunt. According to proponents of this “overkill hypothesis”, humans took full advantage of the easy-to-hunt prey, devastating the animal populations and carelessly driving the giant creatures to extinction.

Not everyone agrees with this idea, however. Many scientists have argued that there is too little archaeological evidence to support the idea that megafauna hunting was persistent or widespread enough to cause extinctions. Instead, significant climatic and ecological changes may have been to blame.

Around the time of the extinctions (between 15,000 and 12,000 years ago), there were two major climatic changes. The first was a period of abrupt warming that began around 14,700 years ago, and the second was a cold snap around 12,900 years ago during which the Northern Hemisphere returned to near-glacial conditions. One or both of these important temperature swings, and their ecological ramifications, have been implicated in the megafauna extinctions.

“A common approach has been to try to determine the timing of megafauna extinctions and to see how they align with human arrival in the Americas or some climatic event,” says Mathew Stewart, co-lead author of the study. “However, extinction is a process–meaning that it unfolds over some span of time–and so to understand what caused the demise of North America’s megafauna, it’s crucial that we understand how their populations fluctuated in the lead up to extinction. Without those long-term patterns, all we can see are rough coincidences.”

To test these conflicting hypotheses, the authors used a new statistical approach developed by W. Christopher Carleton, the study’s other co-lead author, and published last year in the Journal of Quaternary Science. Estimating population sizes of prehistoric hunter-gatherer groups and long-extinct animals cannot be done by counting heads or hooves. Instead, archaeologists and palaeontologists use the radiocarbon record as a proxy for past population sizes. The rationale being that the more animals and humans present in a landscape, the more datable carbon is left behind after they are gone, which is then reflected in the archaeological and fossil records. Unlike established approaches, the new method better accounts for uncertainty in fossil dates.

The major problem with the previous approach is that it blends the uncertainty associated with radiocarbon dates with the process scientists are trying to identify.

“As a result, you can end up seeing trends in the data that don’t really exist, making this method rather unsuitable for capturing changes in past population levels. Using simulation studies where we know what the real patterns in the data are, we have been able to show that the new method does not have the same problems. As a result, our method is able to do a much better job capturing through-time changes in population levels using the radiocarbon record,” explains Carleton.

The authors applied this new approach to the question of the Late Quaternary North American megafauna extinctions. In contrast to previous studies, the new findings show that megafauna populations fluctuated in response to climate change.

“Megafauna populations appear to have been increasing as North American began to warm around 14,700 years ago,” states Stewart. “But we then see a shift in this trend around 12,900 years ago as North America began to drastically cool, and shortly after this we begin to see the extinctions of megafauna occur.”

And while these findings suggest that the return to near glacial conditions around 12,900 years ago was the proximate cause for the extinctions, the story is likely to be more complicated than this.

“We must consider the ecological changes associated with these climate changes at both a continental and regional scale if we want to have a proper understanding of what drove these extinctions,” explains group leader Huw Groucutt, senior author of the study. “Humans also aren’t completely off the hook, as it remains possible that they played a more nuanced role in the megafauna extinctions than simple overkill models suggest.”

Many researchers have argued that it is an impossible coincidence that megafauna extinctions around the world often happened around the time of human arrival. However, it is important to scientifically demonstrate that there was a relationship, and even if there was, the causes may have been much more indirect (such as through habitat modification) than a killing frenzy as humans arrived in a region.

The authors end their article with a call to arms, urging researchers to develop bigger, more reliable records and robust methods for interpreting them. Only then will we develop a comprehensive understanding of the Late Quaternary megafauna extinction event.