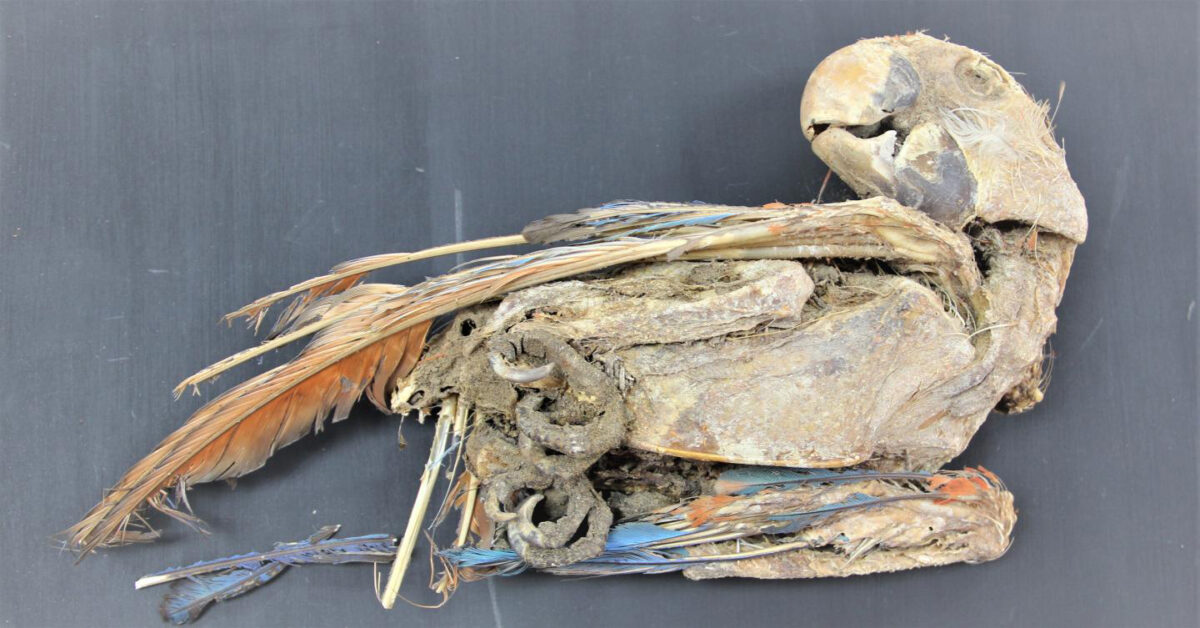 Mummified parrots point to trade in the ancient Atacama desert

Study by international and interdisciplinary team

Ancient Egyptians mummified cats, dogs, ibises and other animals, but closer to home in the South American Atacama desert, parrot mummies reveal that between 1100 and 1450 CE, trade from other areas brought parrots and macaws to oasis communities, according to an international and interdisciplinary team.

“Feathers are valued across the Americas and we see them in high-status burials,” said José M. Capriles, assistant professor of anthropology, Penn State. “We don’t know how the feathers got there, the routes they took or the network.”

Parrots and macaws are not native to the Atacama, which is in northern Chile and is the driest desert in the world, but archaeologists have found feathers in burial context and preserved in leather boxes or other protective material, and they have also found mummified birds — parrots and macaws — at archaeological sites.

“The fact that live birds made their way across the more-than-10,000-foot-high Andes is amazing,” said Capriles. “They had to be transported across huge steppes, cold weather and difficult terrain to the Atacama. And they had to be kept alive.”

Capriles, an archaeologist, grew up around parrots and macaws because his father was a wildlife manager and his mother, Eliana Flores Bedregal, was a Bolivian ornithologist at the Museo Nacional de Historia Natural in La Paz until her death in 2017.

While a postdoctoral fellow in Chile, Capriles investigated the trade and transport of goods like coca, shell, metals, feathers and animals around Bolivia, Peru and Chile.

“Calogero Santoro, professor of anthropology at Universidad de Tarapacá, mentioned the birds to my mother when she came to visit and suggested we study them,” said Capriles. “Our idea was to say something about these parrots, where they were coming from and what species were represented. My mother is a coauthor on this paper.”

Most parrot and macaw remains, whether mummified or not, reside in museums. The team visited collections around northern Chile for nearly three years looking at a wide range of what had been found.

“Once we started working on this, we found so much material about macaws and parrots,” said Capriles. “Columbus took parrots back to Europe and the historical importance of macaw feathers for pre-Columbian societies was ubiquitous.”

Most of the bird remains the researchers found date to between 1000 and 1460 CE, beginning at the end of the Tiwanaku empire and just before the Inca came through the area. According to Capriles, it was a time of warfare, but also a great time for commerce, with frequent llama caravans moving about.

The researchers studied 27 complete or partial remains of scarlet macaws and Amazon parrots from five oasis sites in the Atacama. They reported their results on March 29 in the Proceedings of the National Academy of Sciences.

Using zooarchaeological analysis, isotopic dietary reconstruction, radiocarbon dating and ancient DNA testing, the research catalogued scarlet macaws and at least five other parrot species that were transported from over 300 miles away in the eastern Amazon. The team mapped the distinct natural habitation ranges of scarlet macaws, blue and yellow macaws and the various parrots to try to determine how they traveled to the Atacama.

The researchers also found that the birds were eating the same diet as the agriculturalists who owned them.

“What we consider acceptable interactions with animals under our care was very different back then,” said Capriles. “Some of these birds did not live a happy life. They were kept to produce feathers and their feathers were plucked out as soon as they grew in.”

Perhaps more unusual than the import of parrots and macaws and their usefulness in feather production was their treatment after death. Many of the parrots were found mummified with their mouths wide open and their tongues sticking out. Others had their wings spread wide in permanent flight.

“We have absolutely no idea why they were mummified like this,” said Capriles. “They seem to be eviscerated through their cloaca (a common excretory and reproductive opening), which helped to preserve them. Many times, they were wrapped in textiles or bags.”

Unfortunately, many of the birds were salvage finds — acquired outside of formal archaeological projects — so some types of data are missing, but the birds are typically associated with human burials.

The majority of the mummies were found at Pica 8, a site near an oasis community that still exists today as a locus of goods transport. Pica 8 had agriculture during the time the birds lived there and is currently the source of prized lemons.

“We know that the birds were living there,” said Capriles. “That they were eating the same foods that people were eating enriched with the nitrogen from maize fertilized with marine bird manure. Llamas are not the best pack animals, because they aren’t that strong. The fact that llama caravans brought macaws and parrots across the Andes and across the desert to this oasis is amazing.”