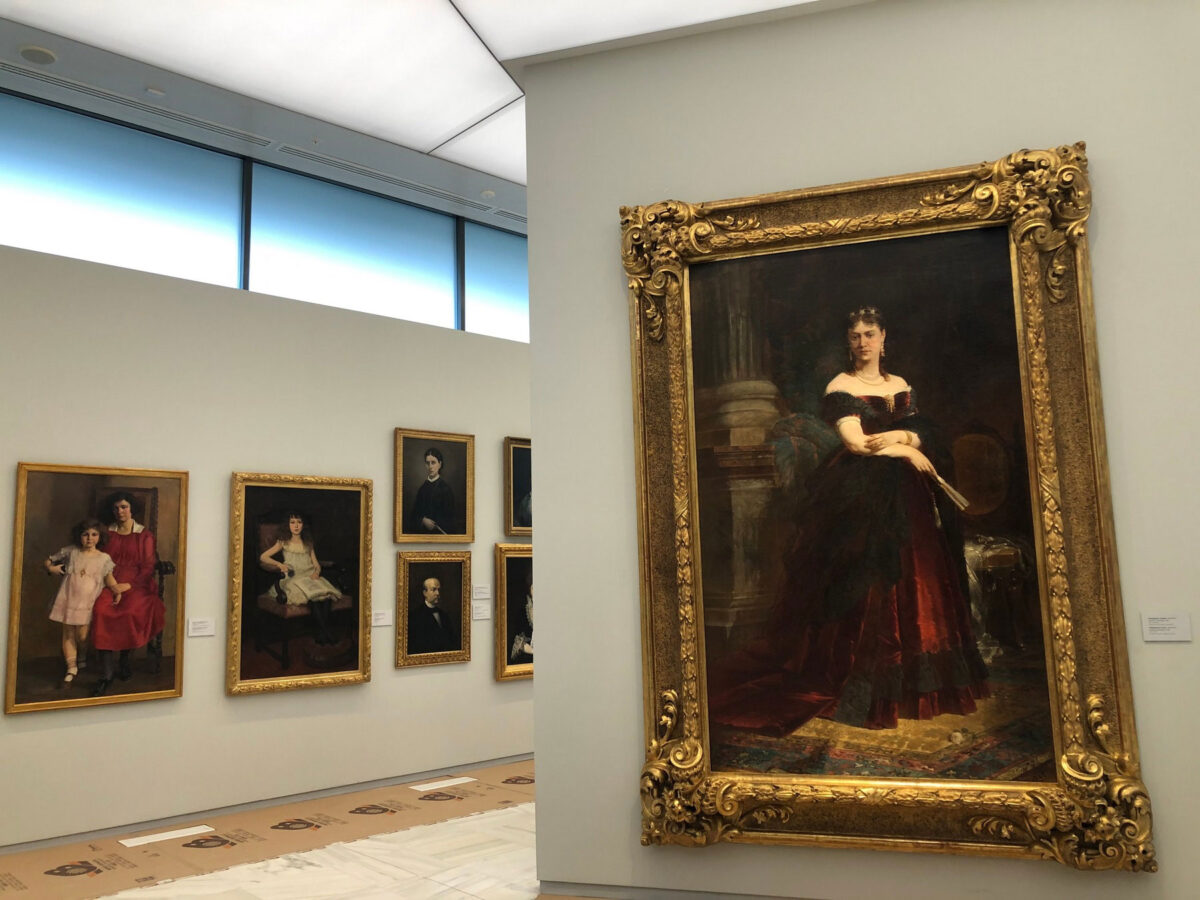 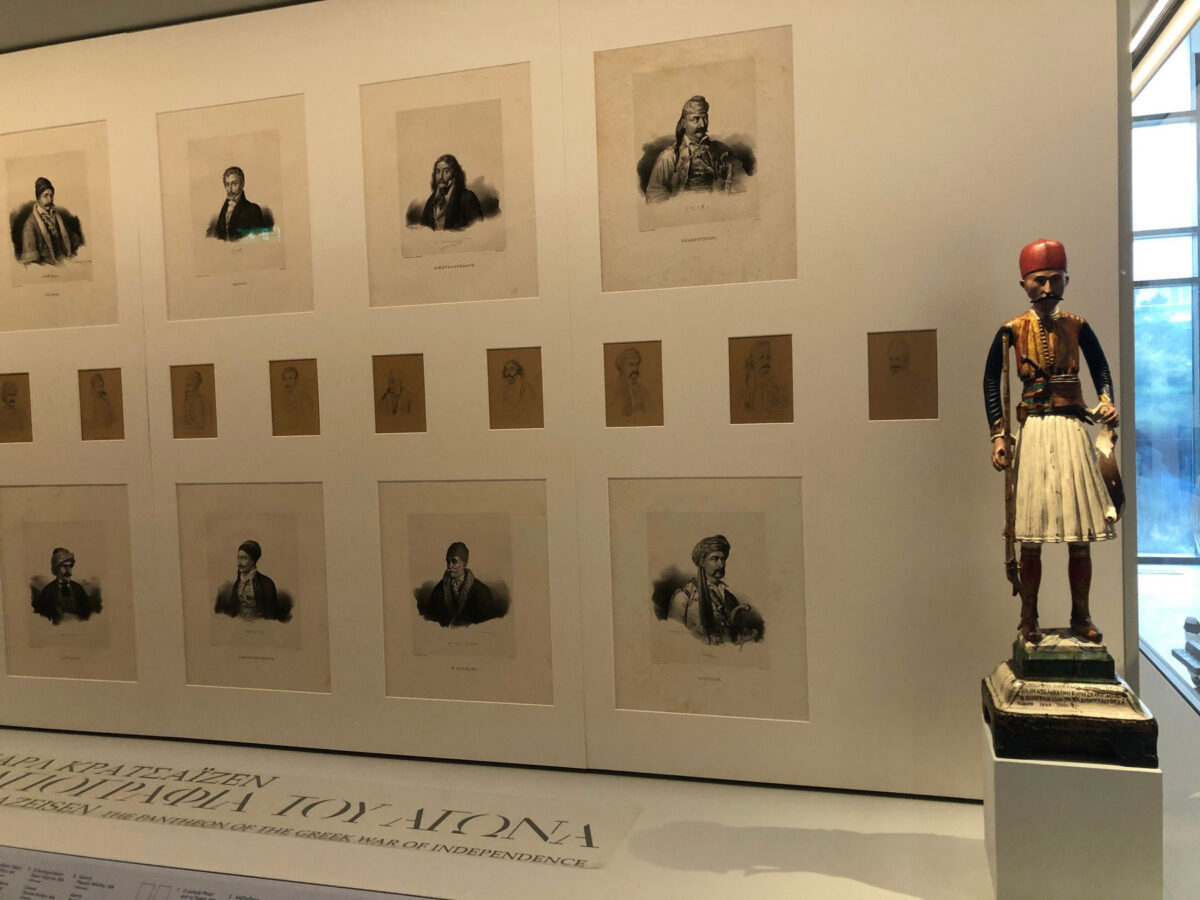 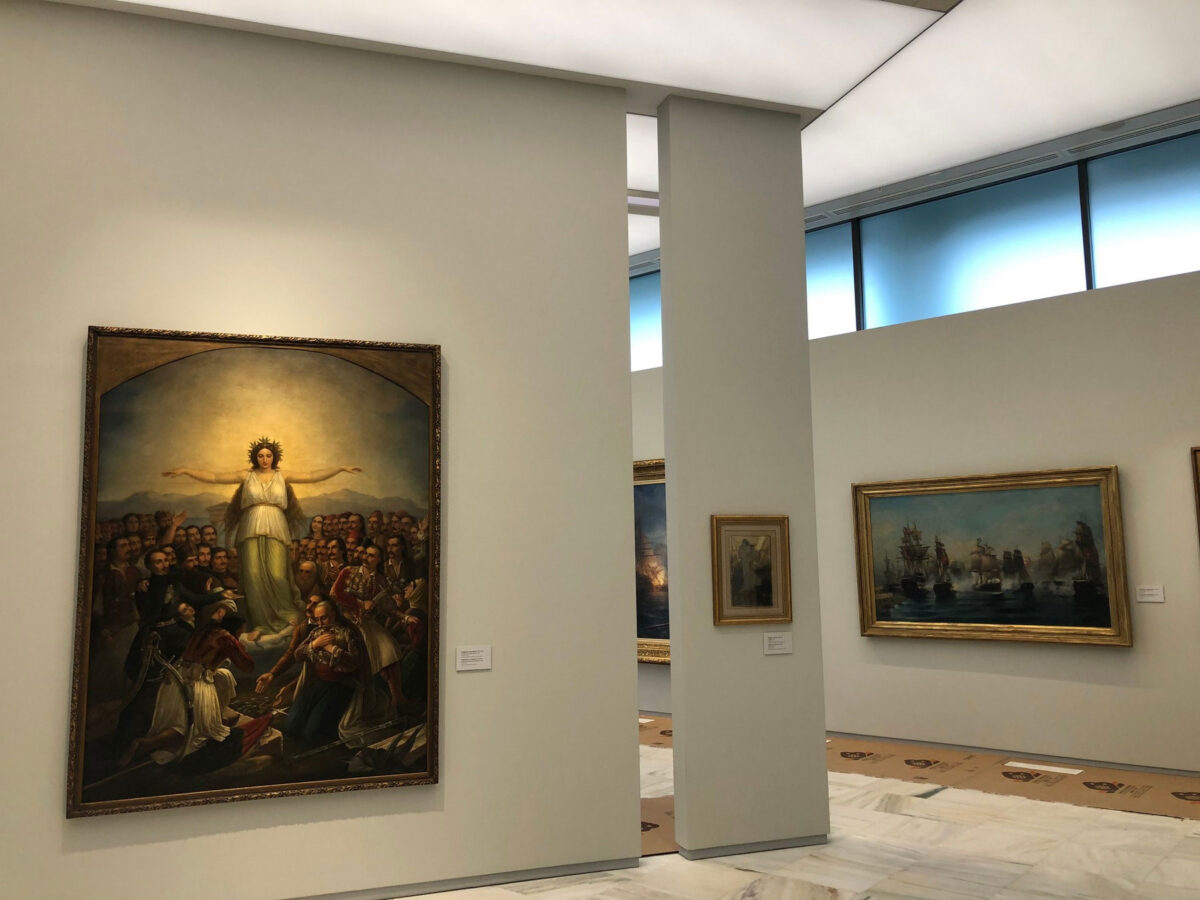 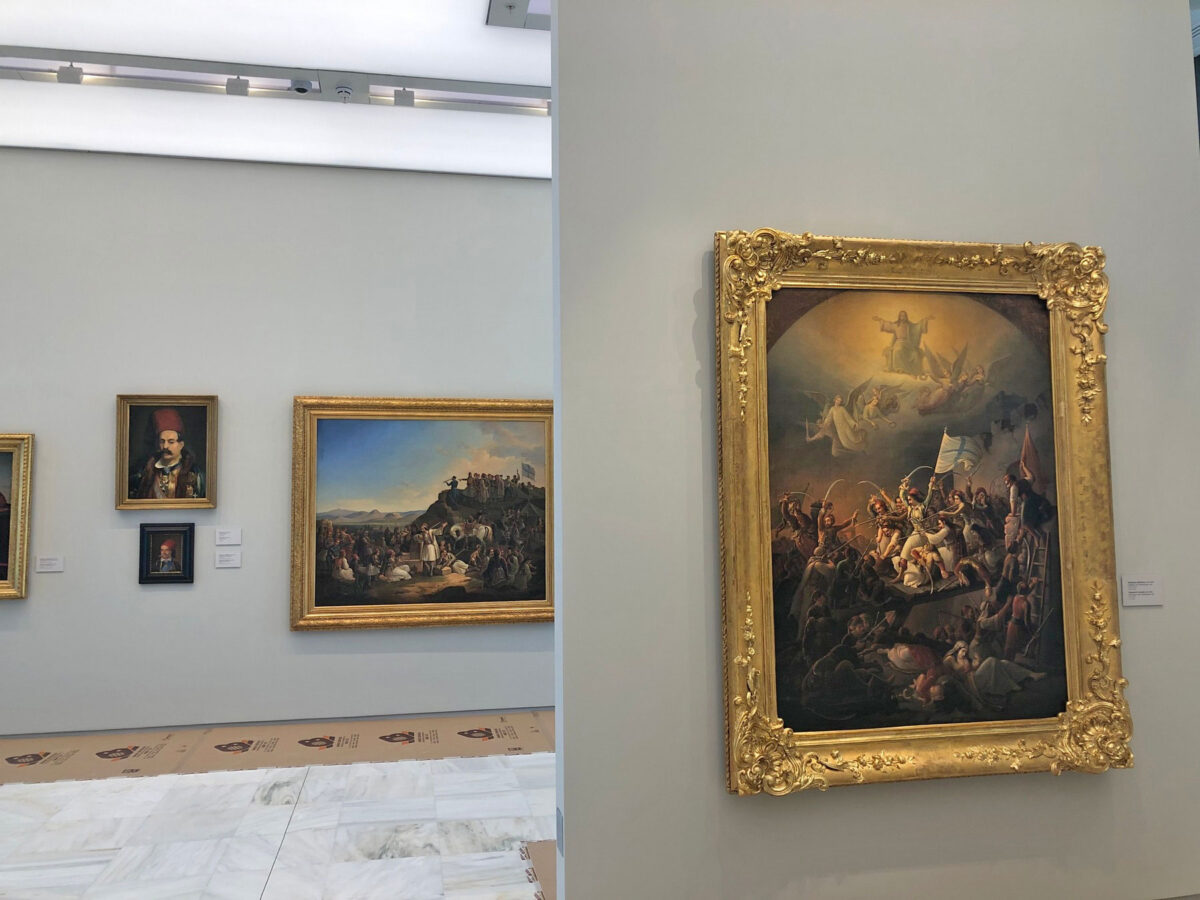 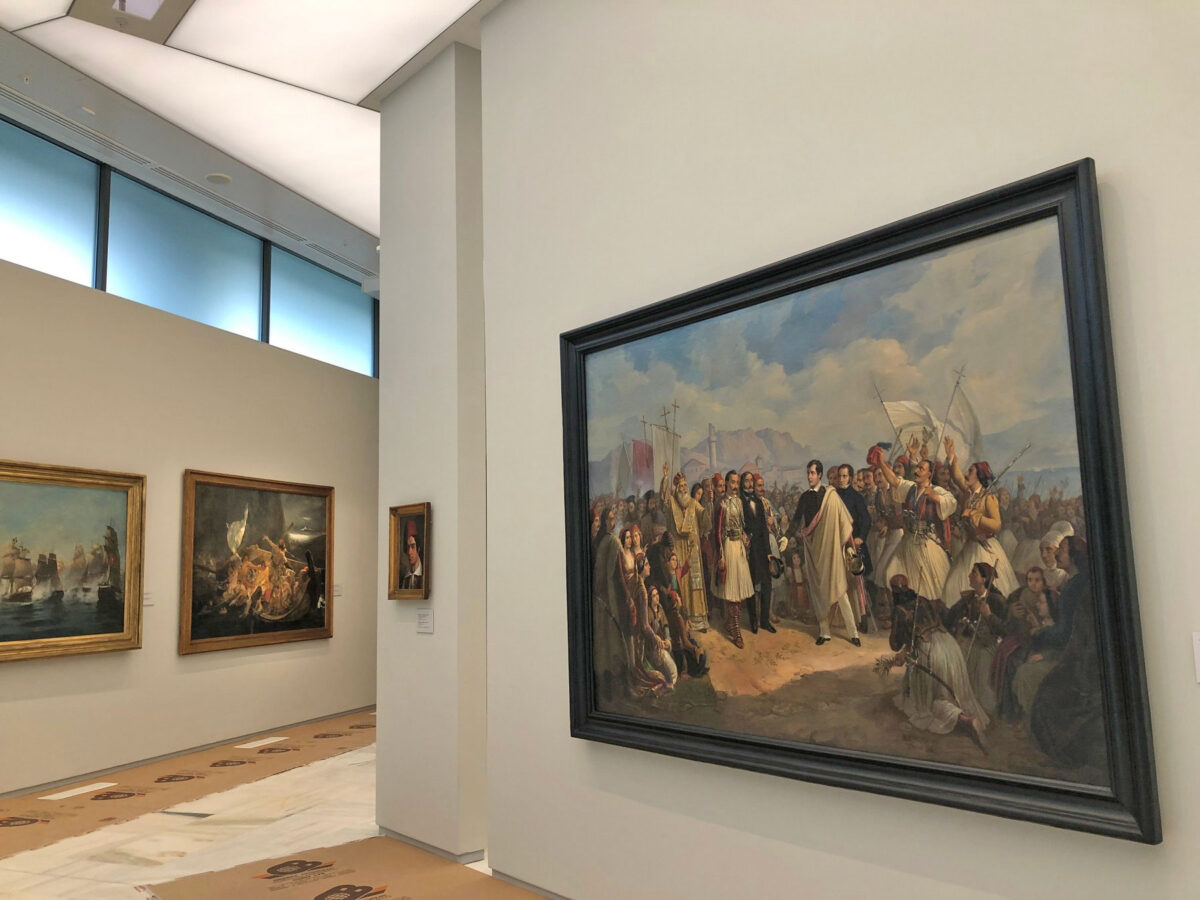 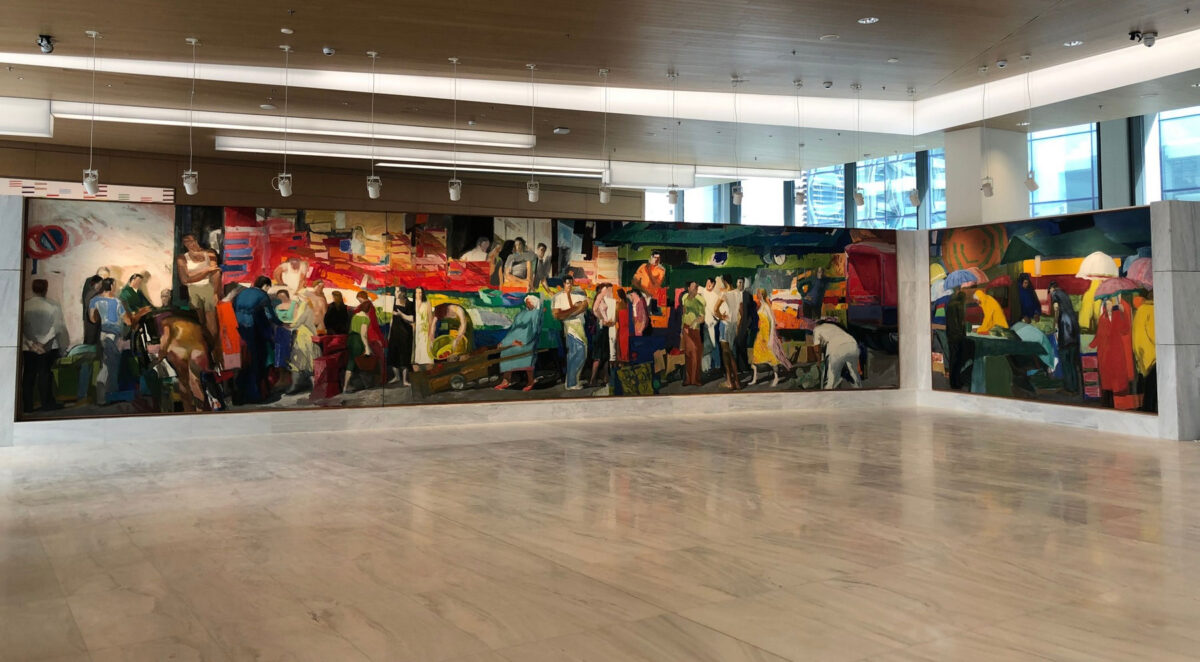 Visitors will be welcomed by the "Street Market" by Panagiotis Tetsis

The National Gallery, its premises expanded and renovated, was symbolically handed over to the public on March 24, as the first major project of the Ministry of Culture and Sports in the new decade.

As soon as the measures for the pandemic allow, the National Gallery will open to visitors and art lovers from Greece and abroad with the temporary exhibition “1821 in Painting. Greece demands its historical Art Gallery”. The works in the exhibition come exclusively from the Gallery’s Greek and European collections of 19th century paintings. Additionally on display are two paintings by Italian artists belonging to the Antonios E. Komninos Foundation, generously loaned on the occasion of the anniversary tribute. All the paintings in the exhibition are emblematic works inspired by the Struggle for the Independence of the Greeks.

After 120 years of uninterrupted operation, the new decade finds the National Gallery with refurbished buildings and a new museography. As a contemporary museum of art, it highlights the physiognomy of Greece’s Culture but also the position the latter deservedly holds in the world. The Gallery’s permanent exhibition now contains 1,000 paintings — out of the 20,000 kept in the storerooms — proving its rich collections’ significant value. The first monumental work encountered by visitors in the main entrance, is the “Street Market” (1979-1982) by Panayiotis Tetsis, an emblematic work that exudes the joy of life and creativity in an explosion of colours, underlining the composition’s universal character.

Chronicle of the expansion and renovation project

The Gallery building, designed by architects Pavlos Mylonas and Dimitris Fatouros, was declared a modern monument in 1998, as a prime example of modernism. The conditions for the Gallery’s expansion were established in 2001 by special law of the Ministry of Culture.

The renovation of the Gallery was completed under the constant supervision of Minister Lina Mendoni and Secretary General George Didaskalou and with the project overseen by staff of the General Directorate for the Restoration, Museums and Technical Works, who undertook the task of completing the buildings with the project contractors often exceeding their contractual obligations. The Gallery staff and their external collaborators saw to the exhibiting of the Collections.

In 2013, before the start of the works, the Gallery was evacuated and paintings transferred to storerooms in Magoula, where suitable infrastructure was created for the works’ complete safety. This was a necessary measure especially after the theft on January 9, 2012, of the “Woman’s Head”, a 1939 work by Picasso donated by the artist in 1949 to the Greek people for their contribution to the resistance against the Germans. Also stolen were “Mill” (1905) by the Dutch Piet Mondrian and a drawing on paper of an early 17th century religious theme, attributed to the Italian Guglielmo Caccia (Moncalvo).

The design of the new National Gallery enhances the building’s aesthetics in the urban environment of Athens and places it at a museological level equal to that of respective museums in the major capitals of Europe. Specifically, an additional 11,040 square meters were added to the pre-existing building of 9,720 square meters, more than doubling its operational space to a total of 20,760 square meters.

The museum has acquired new exhibition spaces of 2,230 sq.m., modern 1,645 sq.m. storerooms for art works, a 350 seat amphitheatre, a space for educational programmes, a 910 sq.m. reception hall which includes, in addition to the ticket office and cloakroom, two shops and a digital information lounge. The new museum has suitably equipped spaces, such as state-of-the-art conservation workshops, administration offices, as well as a two storey library. It also has two cafe-restaurants, with the second on the top level of the building offering panoramic views of the Acropolis, Lycabettus Hill and the Saronic Gulf. The new building can exhibit 1,000 works in a permanent collection, while previously in the old building the number could not exceed 400 works. The new temporary exhibition hall is almost 2,000 sq.m. while the storage spaces can accommodate 10,000 works.

The new National Gallery acquired an additional floor as well as an additional depth of three levels. In the garden created south of the historic main gate, the Gallery has a separate entrance from Michalakopoulou Street (at the junction of Michalakopoulou and Vassileos Konstantinou Streets), compatible with the memory of the river Ilissos. In this way, the flow of water is preserved by creating a canal and additional greenery in the surrounding area. The museum also has ramps overlooking the city skyline for visitors to circulate, elevators and stairwells, full accessibility for the disabled and modern electromagnetic safety systems.

The care for the creation of artistic collections is almost contemporaneous with the independent Greek state and expresses the desire of the Greeks to see a renaissance of the arts in what has been their ancient cradle. In 1836, the famous Bavarian architect Leo von Klenze draws a magnificent plan, proposing a “Pantechnion,” aspiring to host not only the archaeological collections and the School of Arts, but also an Art Gallery. This imposing hall of the arts was never to materialize. In 1878, the first nucleus of the Gallery, comprising 117 works by Greek and European artists, mainly envisaged as an educational annex to the School of Arts, was established in the Technical University of Athens and opened for the public.

In 1896, Alexandros Soutsos, a jurist and art lover, bequeathed his collection and estate to the Greek State aspiring to the creation of a “Museum of Fine Arts”. The National Gallery eventually came into being by an April 10, 1900 decree and an invitation to the painter Georgios Iakovidis to return from Munich. He became its curator in July 28, 1900. Originally in the Technical University and the University collections, a total of 258 works were donated to the newly established Gallery; the 107 works donated by Alexandros Soutsos followed suit in 1901.

History of Art Professor Marina Lambraki Plaka has been head of the National Art Gallery since 1992. During her tenure, successful exhibitions of Greek and foreign artists were organized attracting millions of visitors and establishing the Gallery internationally.

In 2000 the Gallery turned 100 years old. Over time, the needs created by its adopting more extrovert policies combined with the proliferation of 20,000 works in its collections, limited exhibition spaces and inadequate warehouses for storage of works, made it necessary to house the Gallery in refurbished, modern facilities.