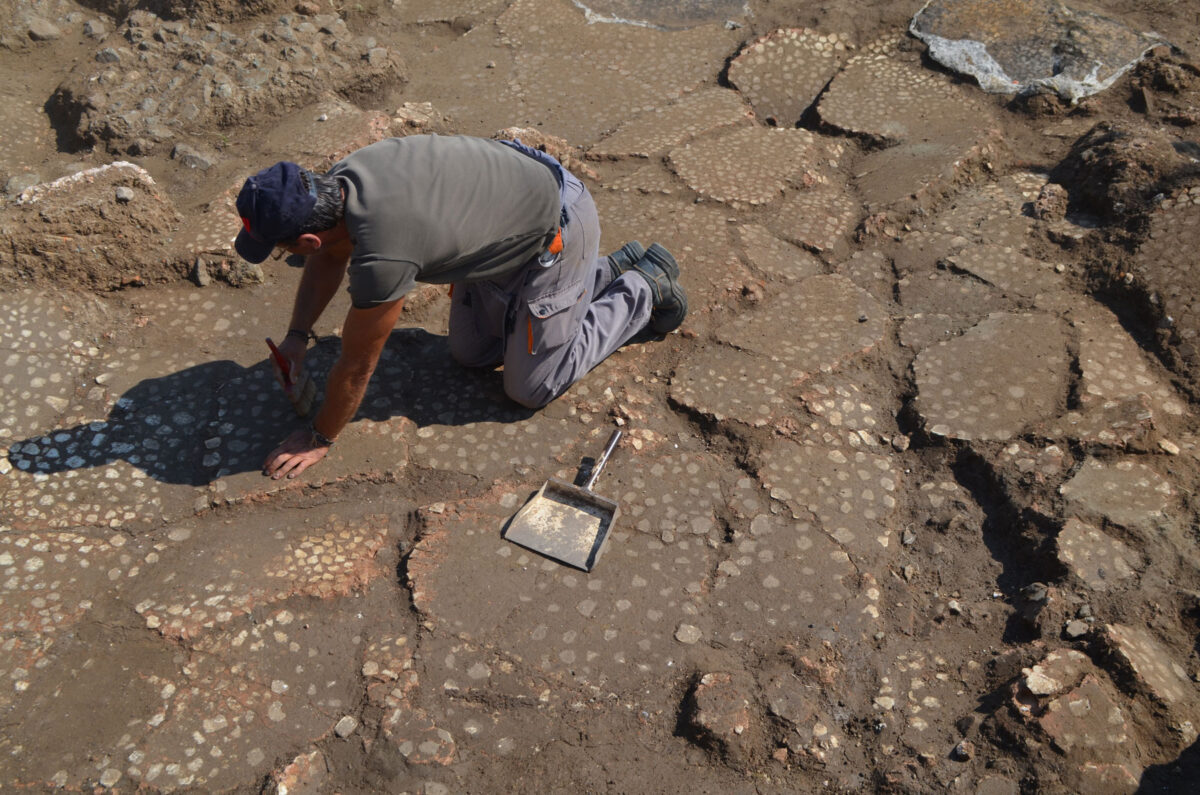 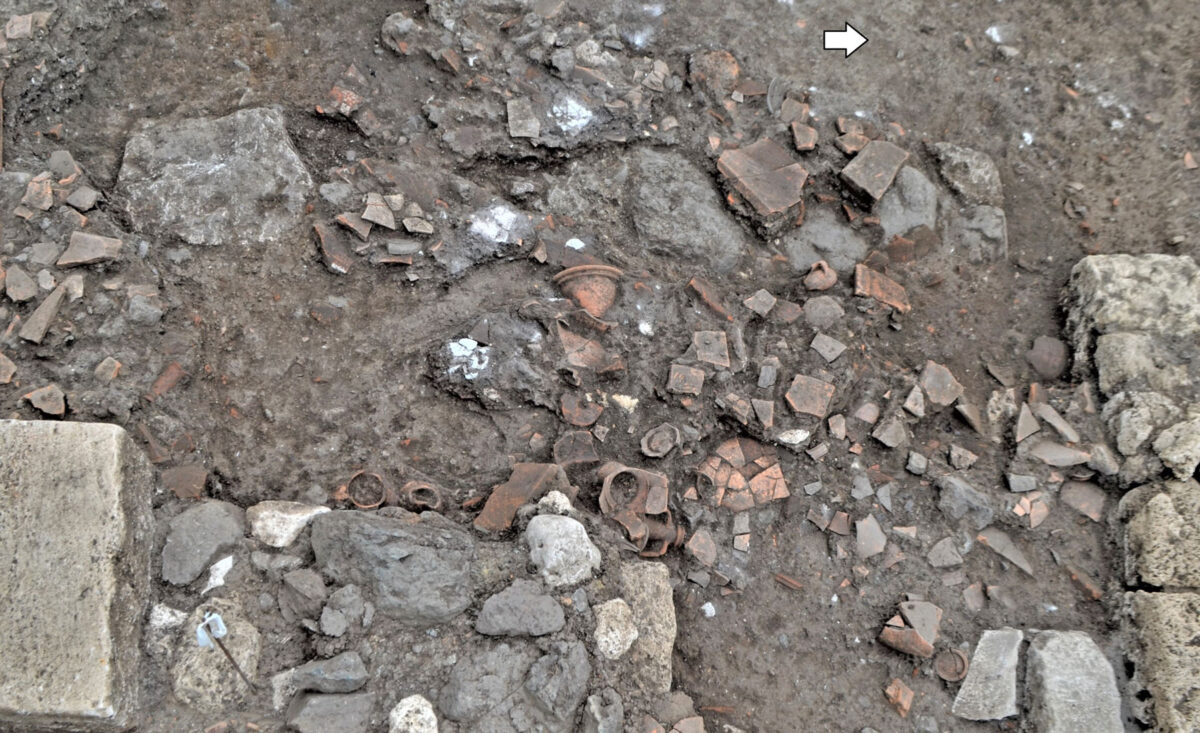 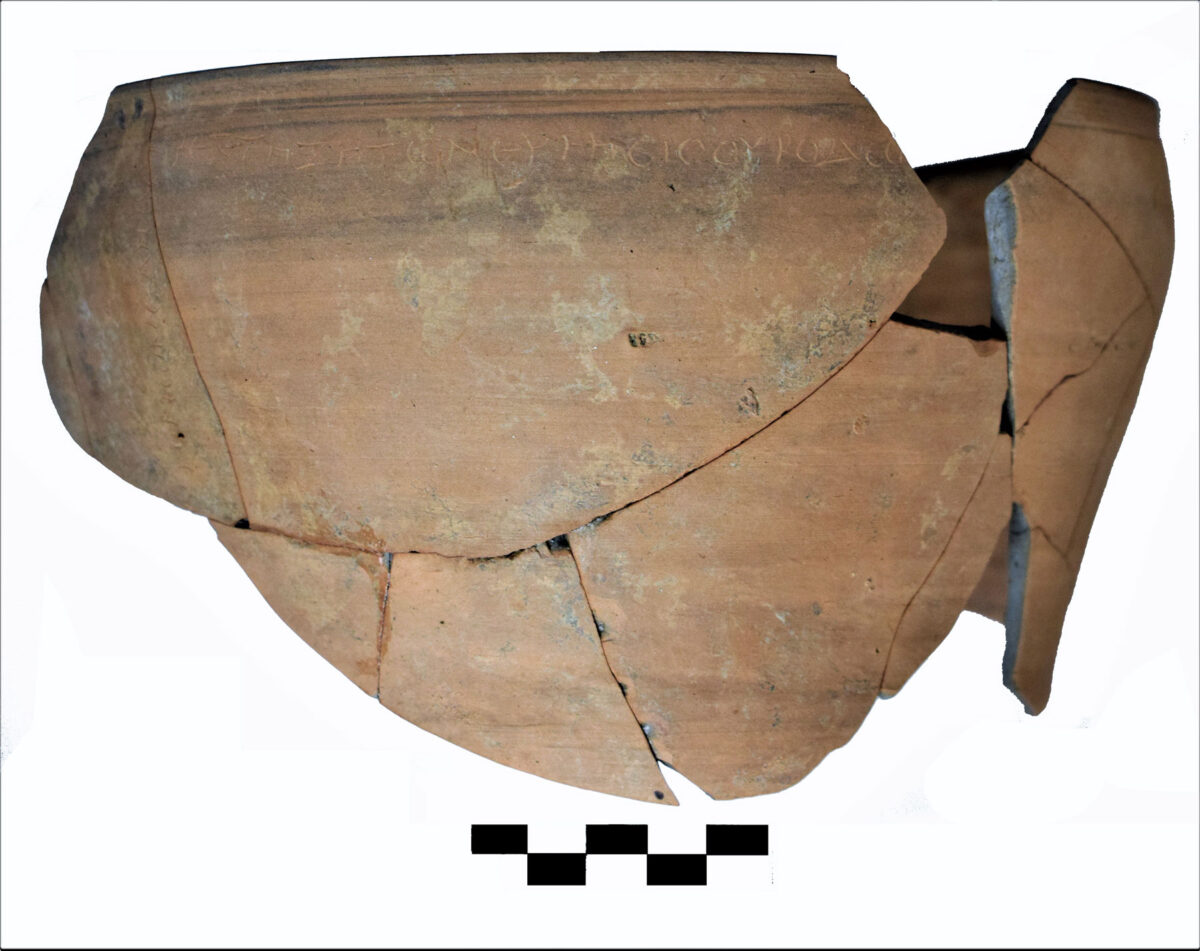 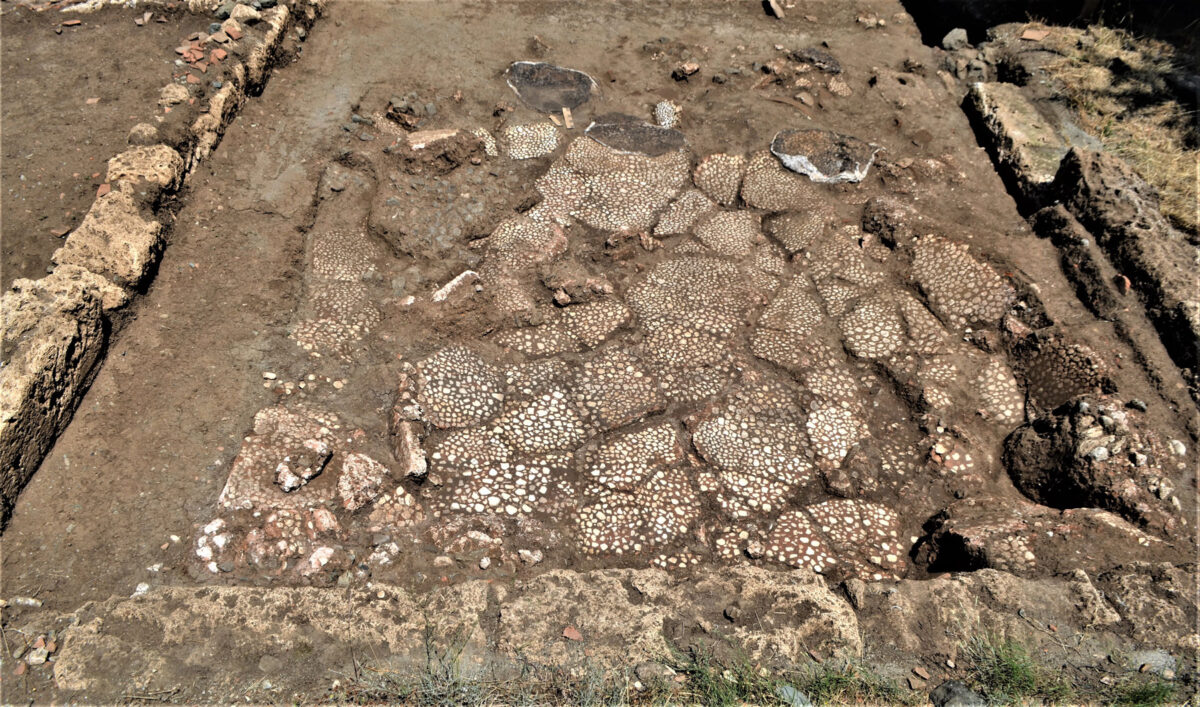 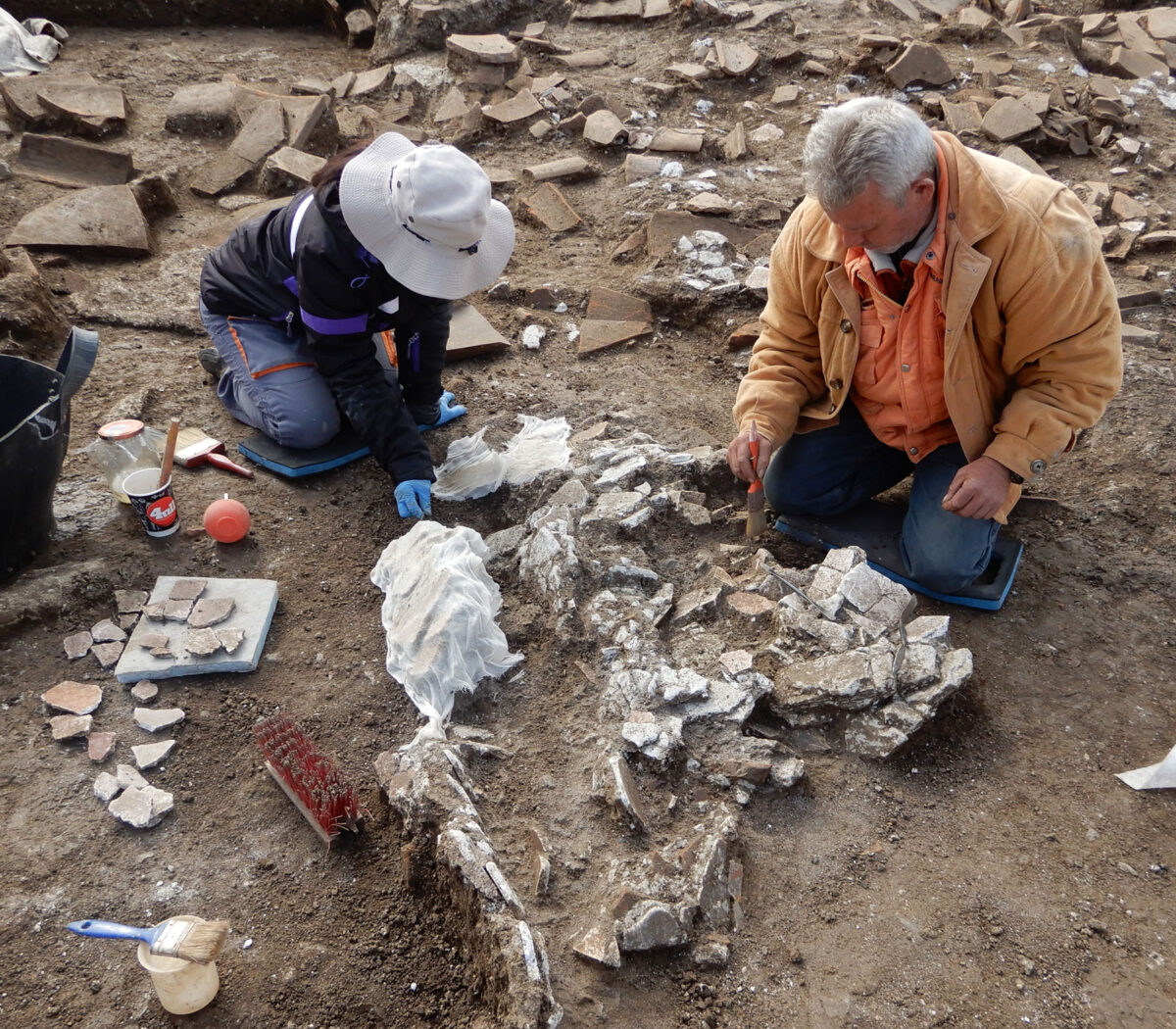 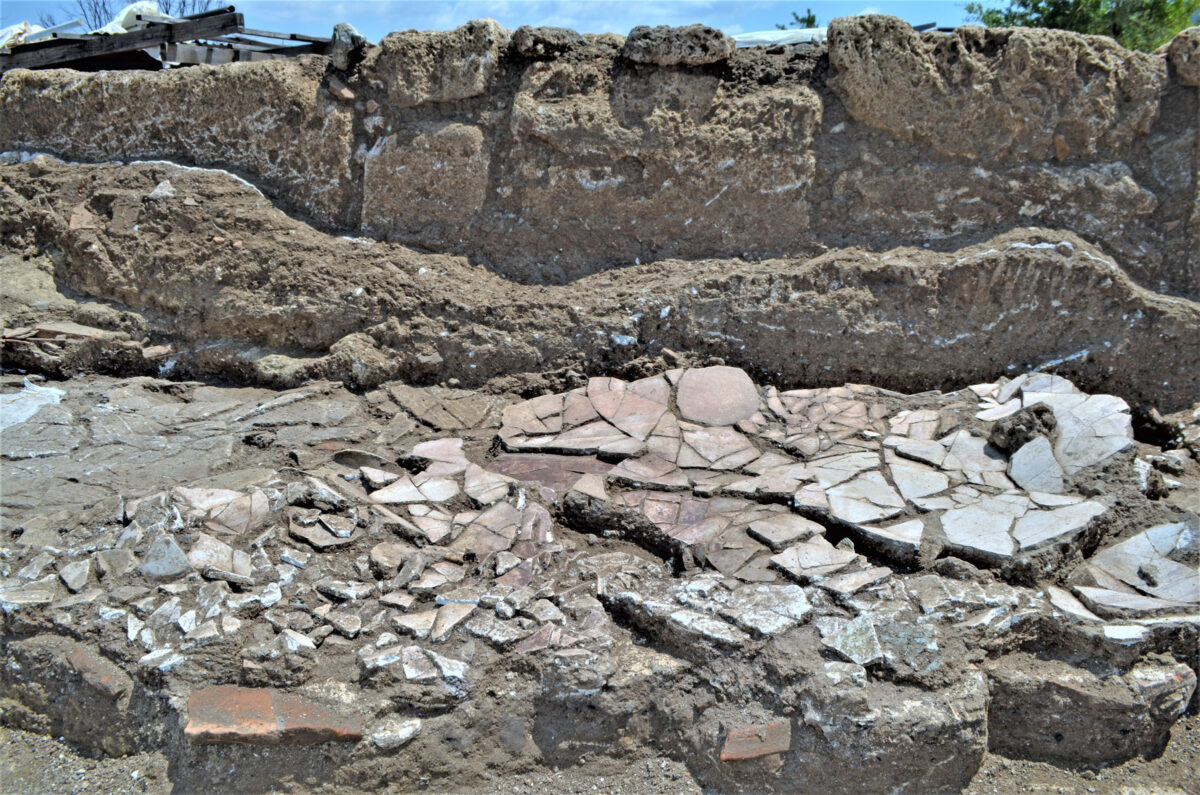 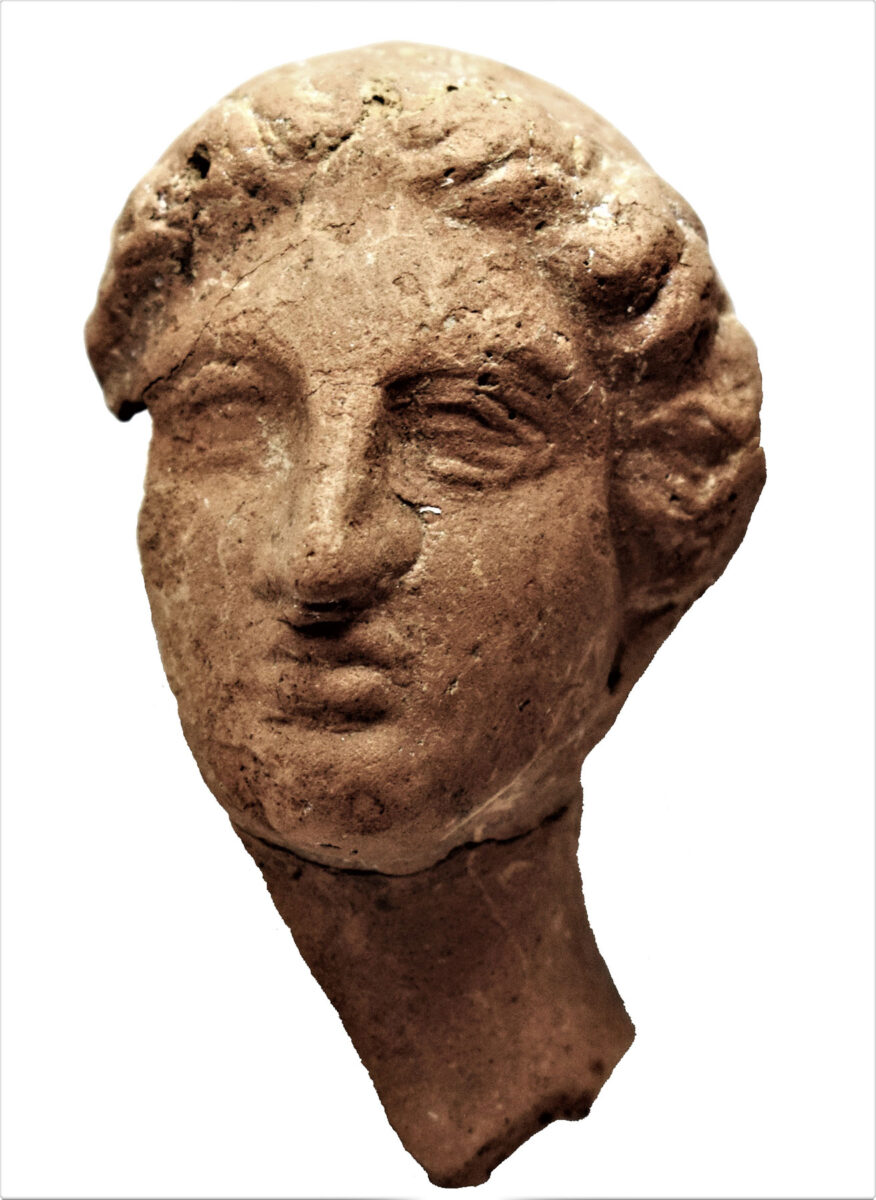 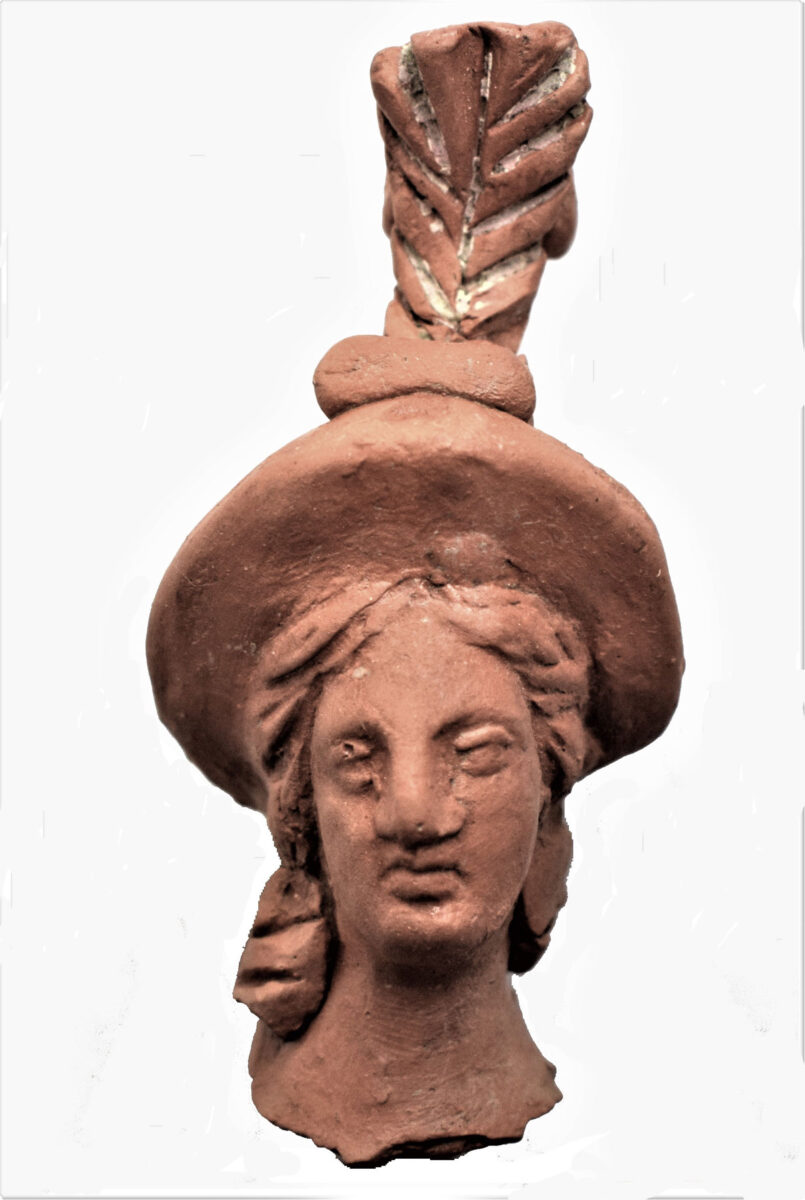 In the last three years, as part of the Hemathia Ephorate of Antiquities’ research for the maintenance study of the large building complex of Aegae located near the wall’s northwest gate and the queens’ burial cluster, new extremely interesting findings have come to light clarifying its picture and helping to identify its function.

“The inscriptions on the tiles allow us to associate the building we are excavating with the worship of members of the royal family. This is a building of the 4th c. BC with major modifications in the era of Philip V, the late 3rd-early 2nd c. BC. These floors come from this phase, as do the plasters, the roof and the figurines; elements that point us to a sanctuary”, says head of the Hemathia Ephorate Angeliki Kottaridi.

A rare find was also found during the works; a poem, which is probably a student exercise, on a vase. “Very interesting and very special”, notes Ms. Kottaridi, who will present the “New Finds in the City of Aegae” at the 33rd Archaeological Conference on excavations in Macedonia and Thrace (April 22-24 2021), taking place online.

The close relationship with the royal family

Like the palace and the temples, the complex is built of precious tufa stone that reached Aegae from the quarries of Vermion, covering a distance of 10-20 km. It is made up of a sequence of square and rectangular spaces, some of which are over 100 sq.m., organized in a regular manner round a large courtyard (the south and part of its east and west sides have been uncovered). To the east stands a temple-shaped space with a very deep antechamber and two Doric columns, facing the courtyard.

The building acquires its basic form before the end of the 4th century BC, but in the times of Philip V (221-179 BC) extensive renovation works are carried out. In this phase there are floors with marble inlay , such as those of the palace, the walls are covered with multicoloured plaster, purple being dominant, with touches of ochre and green and are joined with architectural formations in relief foreshadowing the decorations of the houses of Pompeii. Like the palace, sanctuaries and walls, the complex was destroyed in the mid 2nd c. BC after Macedonia’s final occupation by Metellus’ army. Immediately after the destruction, however, part of its west wing and some spaces next to the east one were rebuilt, while in the years of Augustus (31 BC-14 AD), a large peristyle/colonnade of 1,000 sq.m. was added to its southeast along with an auxiliary building with a patio; building activity particularly remarkable for Aegae which was now in a period of decline.

“Its form, dimensions and elaborate construction, the rich materials and decorative elements, but also the obsession with the use of space, show that it is a public building”, notes the head of the Hemathia Ephorate. “Monolithic altars, a marble support for a table, parts of a marble frieze with impressive plant ornaments and figurines of deities found in situ despite the savage looting, form the impression that it was a sanctuary complex; an impression that seems to have been confirmed in the most striking manner just when we started investigating the layer of tiles from its fallen roof that covered the area”.

Stamps with the Macedonian shield, the symbol used on their coins by the Macedonian kings of the Hellenistic period, and signs/panels with the name AMYNTOU printed on the tiles of its roof, revealed its close relationship with the royal family and more: As in the case of the tiles with the corresponding inscription ΠΕΛΛΗΣ, the name indicates the owner who in this particular sacred building, at least in a part of it, cannot be other than the father of Philip II, Amyntas III who was given hero status and is known from the sources that his cult also existed in neighbouring Pydna. Eurydice, wife of Amyntas, is depicted as the goddess Hera in the statue commissioned for the sanctuary of Eucleia in Aegae, and it is certainly no coincidence that in the times of the Antigonids a temple-shaped building was built round the statue of the queen-mother.

A student’s exercise, a poem on the passing of time

“The cult of Alexander and his generation in the years of the successors was a source for legitimizing their power and it is very likely that the large building complex unearthed at the ancestral royal seat and grave site of the Temenides was one of its centers, which yielded another extremely valuable and unexpected finding in 2020: In a modest clay cup found broken in the destruction layer of the 2nd c. BC, someone, perhaps a student who confused the o with the ω and the ei with the i while doing his exercises, carefully carved, as if on a papyrus, an epigram by an anonymous author, which has been handed down to us in its oldest and most authentic form: “the rose blooms for a while and when its time passes and you search for it, you will no longer find a flower, but only  thorns”.

Known from the Palatine Anthology, the epigram of Aegae urges the reader not to waste time that flies by relentlessly and gives us in the most direct and original way a picture of culture in the ancient Macedonian metropolis as it draws its final breath. “The first finding is tremendously important for a greater understanding of the city and of history, but the second is very moving”, said Ms. Kottaridi.