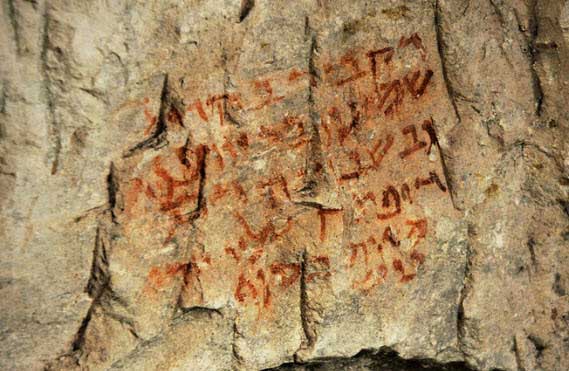 Ancient graffiti records the tweets of the past

Collection and analysis of inscriptions written by ordinary people

An international project is gaining invaluable insights into the history of ancient Israel through the collection and analysis of inscriptions — pieces of common writing that include anything from a single word to a love poem, epitaph, declaration, or question about faith and everything in between that does not appear in a book or on a coin.

History is too often viewed through the records of kings and great religious and military leaders and much of what we know about the past derives from official sources written on behalf of these individuals, but this new record tells us about the marks left by ordinary people that make up the population of the past.

Such writing on the walls — or column, stone, tomb, floor, or mosaic — is essential to a scholar’s toolbox, explains Prof. Jonathan Price of Tel Aviv University’s Department of Classics. Along with his colleague Prof. Benjamin Isaac, Prof. Hannah Cotton of Hebrew University and Prof. Werner Eck of the University of Cologne, he is a contributing editor to a series of volumes that presents the written remains of the lives of common individuals in Israel, as well as adding important information about provincial administration and religious institutions, during the period between Alexander the Great and the rise of Islam (the fourth century BCE to the seventh century CE).

The tweets of antiquity

There has never been a comprehensive and concerted effort to collect inscriptions in a multi-lingual/multi-period publication. Previous collections have been limited to the viewpoints of single cultures, topics, or languages. This innovative series of volumes seeks to uncover the whole story of a site by incorporating inscriptions of every subject, length and language, publishing them side by side. “In antiquity, the part of the world that is now modern Israel was multilingual, multicultural and highly literate”, says Prof. Price. When the volumes are complete, they will include a corpus of data that is likely to contain 13,000 items in over ten languages.

The project represents countless hours in museum storerooms, church basements, caves and archaeological sites and saw the researchers dedicated to transcribing inscriptions straight from the physical objects on which they are written whenever possible, instead of using previous drawings, photos or reproductions. The team has already discovered a great amount of material that has never been published before.

Researchers have had to overcome the challenges of incomplete inscriptions, eroded stonework and sometimes poor use of grammar and spelling, which represent different levels in education and reading and writing capabilities — or simply the informal nature of the text. Scholars thousands of years in the future might face similar difficulties when trying to decipher the language of our own text messages or emails.

Most of these inscriptions, especially the thousands of epitaphs, are written by average people, their names not recorded in any other source. This makes them indispensable for social, cultural, and religious history, suggests Prof. Price. “They give us information about what people believed, the languages they spoke, relationships between families, their occupations — daily life,” he says. “We don’t have this from any other source.”

The first volume, edited by Prof. Price, Prof. Isaac and others focus on Jerusalem up to and through the first century C.E., has already been published. New volumes will be published regularly until the project comes to a close in 2017, resulting in approximately nine volumes.

Some examples of the graffiti are of the Greek name “Christo” found on limestone walls in the Judean hills, the Jewish family name “Sh-ph-n” (“rabbit”) found in a first century CE burial cave, and the name “Yonatan” in another burial cave. Many scrawls were found in the extended caves used by the Jewish population to hide from the Romans during the Jewish Revolts of 66 and 135 CE. some of which have still to be deciphered. Another fascinating text that was found in a tomb says, “Take courage, Holy Parents of Pharcitae, udes adonitas — no one is immortal.”

Graffiti, which comprise a significant amount of the collected inscriptions are a common phenomenon throughout the ancient world. Famously, the walls of the city of Pompeii were covered with graffiti, including advertisements, poetry, and lewd sketches. In ancient Israel, people also left behind small traces of their lives — although discussion of belief systems, personal appeals to God and hopes for the future are more prevalent than the sexual innuendo that adorns the walls of Pompeii.

“These are the only remains of real people. Thousands whose voices have disappeared into the oblivion of history,” notes Prof. Price. These writings are and have always been a way for people to perpetuate their memory and mark their existence.

Our world has its graffiti too from doorways and bathroom stalls to even protected archaeological sites. Although it may be considered annoying now, “in two thousand years, it’ll be interesting to scholars,” Prof. Price says with a smile.