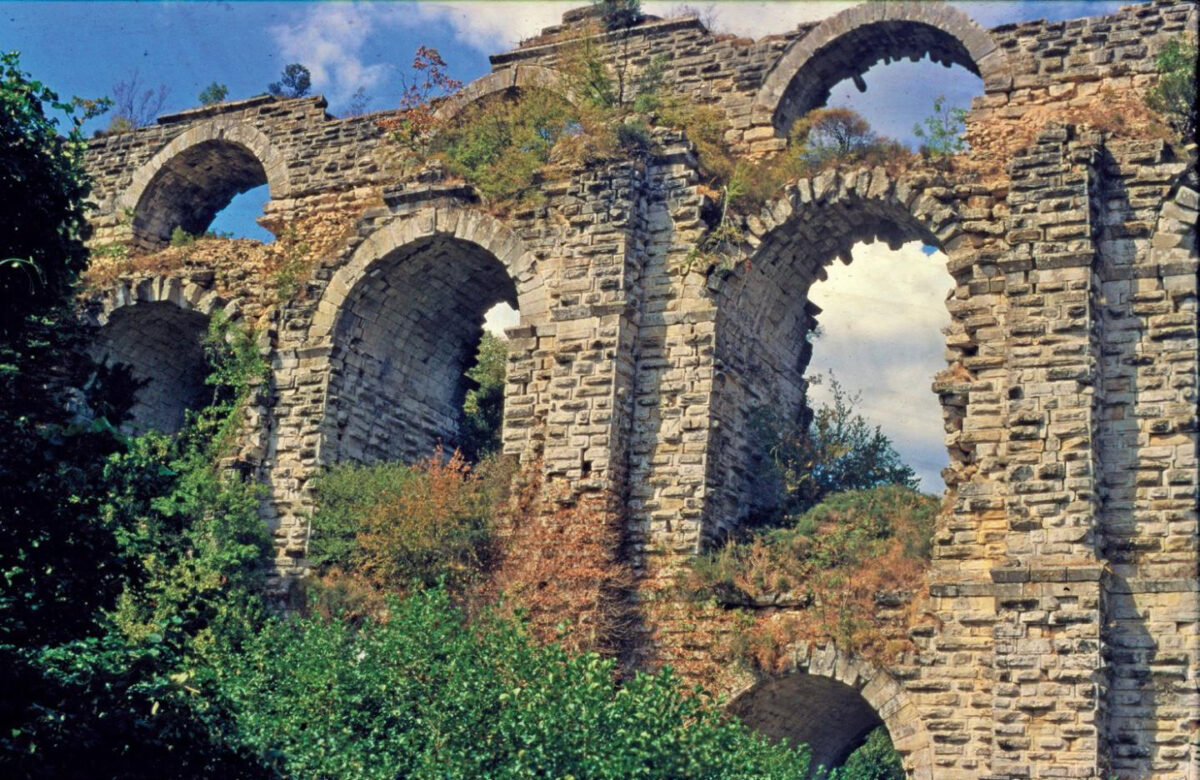 Managing the Aqueduct of Constantinople

The longest water channel of the ancient world

Aqueducts are very impressive examples of the art of construction in the Roman Empire. Even today, they still provide us with new insights into aesthetic, practical, and technical aspects of construction and use. Scientists at Johannes Gutenberg University Mainz (JGU) investigated the longest aqueduct of the time, the 426-kilometer-long Aqueduct of Valens supplying Constantinople, and revealed new insights into how this structure was maintained back in time. It appears that the channels had been cleaned of carbonate deposits just a few decades before the site was abandoned.

The late Roman aqueduct provided water for the population of Constantinople

The Roman Empire was ahead of its time in many ways, with a strong commitment to build infrastructure for its citizens which we still find fascinating today. This includes architecturally inspiring temples, theaters, and amphitheaters, but also a dense road network and impressive harbors and mines. “However, the most ground-breaking technical achievement of the Roman Empire lies in its water management, particularly its long-distance aqueducts that delivered water to cities, baths, and mines,” said Dr. Gül Sürmelihindi from the Geoarchaeology group at Mainz University. Aqueducts were not a Roman invention, but in Roman hands these long-distance aqueducts developed further and extensively diffused throughout one of the largest empires in history.

Almost every city in the Roman Empire had an ample supply of fresh running water, in some cases actually with a larger volume than is the case today. “These aqueducts are mostly known for their impressive bridges, such as the Pont du Gard in southern France, which are still standing today after two millennia. But they are most impressive because of the way problems in their construction were solved, which would be daunting even for modern engineers,” said JGU Professor Cees Passchier. More than 2,000 long-distance Roman aqueducts are known to date, and many more are awaiting discovery. The study undertaken by Dr. Gül Sürmelihindi and her research team focuses on the most spectacular late-Roman aqueduct, the water supply lines of Constantinople, now Istanbul in present-day Turkey.

In AD 324, the Roman Emperor Constantine the Great made Constantinople the new capital of the Roman Empire. Although the city lies at the geopolitically important crossroads of land routes and seaways, fresh water supply was a problem. A new aqueduct was therefore built to supply Constantinople from springs 60 kilometers to the west. As the city grew, this system was expanded in the 5th century to springs that lie even 120 kilometers from the city in a straight line. This gave the aqueduct a total length of at least 426 kilometers, making it the longest of the ancient world. The aqueduct consisted of vaulted masonry channels large enough to walk through, built of stone and concrete, 90 large bridges, and many tunnels up to 5 kilometers long.

Sürmelihindi and her team studied carbonate deposits from this aqueduct, i.e., the limescale that formed in the running water, which can be used to obtain important information about water management and the palaeoenvironment at that time. The researchers found that the entire aqueduct system only contained thin carbonate deposits, representing about 27 years of use. From the annals of the city, however, it is known that the aqueduct system worked for more than 700 years, until at least the 12th century. “This means the entire aqueduct must have been maintained and cleaned of deposits during the Byzantine Empire, even shortly before it ceased working,” explained Sürmelihindi. Carbonate deposits can block the entire water supply and have to be removed from time to time.

Double construction over 50 kilometers was likely built for maintenance

Although the aqueduct is late Roman in origin, the carbonate found in the channel is from the Byzantine Middle Ages. This made the researchers think about possible cleaning and maintenance strategies – because cleaning and repairing a channel of 426 kilometers implies that it cannot be used for weeks or months, while the city population depends on its water supply. They then found that 50 kilometers of the central part of the water system is constructed double, with one aqueduct channel above the other, crossing on two-story bridges. “It is very likely that this system was set up to allow for cleaning and maintenance operations,” said Passchier. “It would have been a costly but practical solution.”

Unfortunately for the research team, it is no longer possible to study the exact operation of the system. One of the most imposing bridges, that of Ballıgerme, was blown up with dynamite in 2020 by treasure hunters who erroneously believed they could find gold in the ruins.