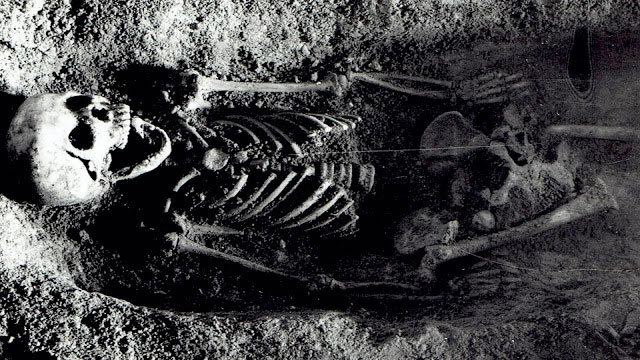 Skeleton with bird skull in its mouth identified

At the Cave Tunel Wielki in the Kraków-Częstochowa Upland, Poland

Skeletal remains found in a cave with a bird’s skull in its mouth and another next to its cheek have been identified as belonging to a 12-year-old Scandinavian girl from the 17th century.

Archaeologists working at the Cave Tunel Wielki in the Kraków-Częstochowa Upland in southeast Poland, say the girl with a chaffinch head in her mouth had come over with an army of invaders during the 1655 Swedish Deluge.

Discovered a few years ago, the grisly find has only now wielded results following detailed analysis and genetic research.

Dr. Małgorzata Kot from the Faculty of Archaeology of the University of Warsaw, who analyses this extraordinary find together with her team as part of a project financed by the National Science Centre said: “This was not typical archaeological research. We had to apply a wide range of research methods to reach this conclusion. This was a detective work.”

Though genetic research, the history sleuths were able to establish that she was not Polish, with all the clues pointing to lands inhabited by Fins. They added that the burial was also uncharacteristic for that found on Polish territory.

Radiocarbon dating eventually determined that the death took place in the second half of the 17th or in the 18th century.

Researchers then searched for similar funeral rituals from that period in Scandinavia. They failed to find direct analogies, but they pointed out that in some regions of Finland, Christianity was not so strongly embedded a few hundred years ago and pagan practices were not uncommon.

According to Dr. Kot, in some parts, for example in Karelia, as late as in the 19th century, a person who died in the forest had to be buried in the forest, not in a cemetery.

Dr. Kot said: “Our Finnish colleague, Dr. Frog, pointed out that birds symbolized the soul’s journey after death. But burials with bird heads are not known from North East Scandinavia.”

Michał Wojenka from the Institute of Archaeology of the Jagiellonian University in Kraków added: “We started to look for circumstances, in which the +people from the north+ could end up near Ojców in the 17th and 18th centuries. The time of the Swedish Deluge is certainly in the foreground here, during which the invaders took and manned the Ojców castle in 1655.”

According to historical sources, in the Swedish garrison on Wawel there were 3,000 soldiers, mainly Fins. These troops reached Małopolska in autumn, the same time as the birds are thought to have died. The researchers say that some soldiers from the garrison were stationed in the castle in Ojców, near Cave Tunel Wielki.

Dr. Wojenka said: “We often imagine that only a regular army entered Poland during the Swedish Deluge, but according to the contemporary reports there were also many women and children in the camps. That was also the case of the Swedish garrison at the castle in Ojców.”

However mystery still surrounds how the girl died. Analysis of her bones suggest that she did not have an easy life, with her bone growth, known as Harris lines, showing she suffered from hunger.

Dr. Wojenka said: “We have squeezed the available analyses like a lemon to obtain as much information as possible. We are 95 percent certain that our version of events is correct.”

The paper on detailed analysis of the unusual burial appeared in the German scientific journal Praehistorische Zeitschrift.