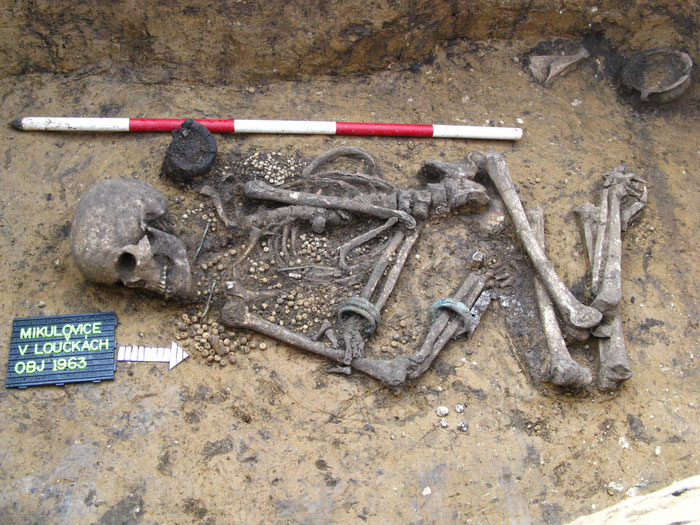 Centrally located along trade routes and tightly nestled around the important waterways such as the Elbe River, Bohemia attracted many different archaeological cultures, rendering it a key region in understanding the prehistory of Europe. In addition to the expansions associated with the spread of agriculture and “steppe”-related ancestry previously discovered, this new study identifies at least another three migratory events which shaped central European prehistory.

The genetic profiles of people associated with Funnelbeaker and Globular Amphora cultures show evidence of being recent migrants to the region. This finding shows that the period between arrival of agriculture and “steppe”-related ancestry, hitherto thought of as an uneventful period, was more dynamic than previously hypothesised.

Drastic changes to the genetic landscape

The large sample size of the study, particularly concentrated on the Late Neolithic and Early Bronze Age (~6,000-3,700 years ago), also allowed novel insights into social processes to be made. Individuals associated with the Corded Ware culture expanded from Eastern Europe and then assimilated preferentially central European women into their culture, giving them the same burial ritual as members of the immigrating group. “We were finally able to fill key temporal gaps, especially in the transition period around 5,000 years ago, when we see the genetic landscape changing drastically”, says Max Planck researcher Wolfgang Haak, senior author and principal investigator of the study. “Intriguingly, in this early horizon we find individuals with high amounts of ‘steppe’ ancestry next to others with little or none, all buried according to the same customs.”

Once established, individuals of the Corded Ware culture (4,900-4,400 years ago) changed genetically through time. One important change seems to have been the sharp decline in Y-chromosome lineage diversity. Although initially carrying five different Y-lineages, later Corded Ware males carry almost exclusively only a single lineage, essentially being descended from the same man in the recent past. “This pattern may reflect the emergence of a new social structure or regulation of mating in which only a subset of men fathered the majority of offspring”, says first author Luka Papac, a researcher at the Max Planck Institute for the Science of Human History.

This social structure seems to have been even stricter in the following Bell Beaker society (4,500-4,200 years ago) where every single male sampled belonged to a single, newly introduced Y-lineage. Remarkably, this Bell Beaker Y-lineage is never seen before in Bohemia, implying that a new clan arrived in the region and almost immediately replaced all pre-existing Y-lineages with not a single lineage from Corded Ware or previous societies found among Bell Beaker males.

The Early Bronze Age Unetice culture has traditionally been thought of descending from Bell Beaker individuals, with perhaps limited input from the southeast (Carpathian Basin). However, the new genetic data supports yet another genetic turnover originating from regions northeast of Bohemia. Remarkably, also 80 percent of the early Unetice Y-lineages are new to Bohemia, some of which are previously found in individuals from north-eastern Europe, providing clues to where they originated from. “This finding was very surprising to us archaeologists as we did not expect to see such clear patterns, even though the region has played a critical role, e.g. in the emerging trade of amber from the Baltic and became an important trading hub during the Bronze and Iron Ages”, adds co-author and co-PI Michal Ernée from the Czech Academy of Sciences.

The results paint a highly dynamic picture of the prehistory of central Europe, with many and frequent changes in the cultural, biological, and social make-up of societies, highlighting the power and potential of high-resolution studies at regional scale. Challenges remain in understanding the socio-economic, environmental and/or political reasons and mechanisms behind these changes, which provides ample scope for future cross-disciplinary studies of Europe’s prehistory.