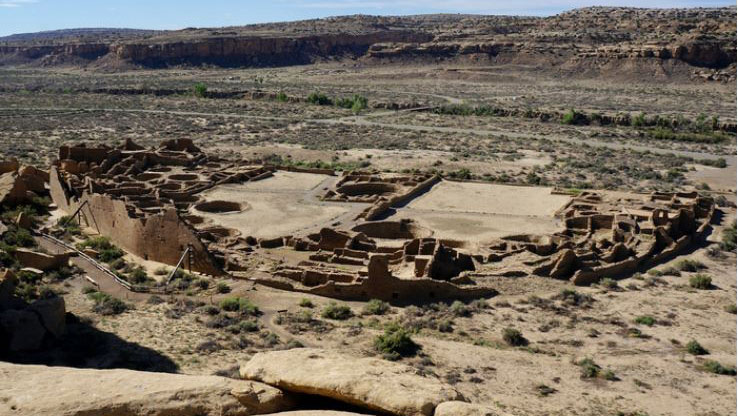 While some current scientific theories point to ancient Chaco Canyon, a distinctive archaeological site in the American southwest, as simply a prehistoric ceremonial site populated only during sacred rituals — University of Cincinnati researchers are turning that popular belief on its head.

“The ancestral puebloans interacted with the local ecosystem in ways that helped them adapt and thrive for over a millennium,” says David Lentz, UC professor of biology and co-author of the study published in the journal PLOS ONE titled, “Ecosystem impacts by the ancestral Puebloans of Chaco Canyon, New Mexico, USA.”

“Many active researchers, however, align with the idea that Chaco Canyon was too arid to sustain day-to-day living, arguing that the land and architectural structures were not permanent dwellings.

“Basically, they contend that the massive stone and timber infrastructure at Chaco Canyon, built over many centuries, was used only as a periodic ceremonial center and storage facility. But it was not that simple and our evidence contradicts many of the currently proposed theories about the occupation of Chaco Canyon in ancient times.”

Through on-site pollen and botanical analysis and lidar mapping technology during the last decade, Lentz and a team of interdisciplinary researchers from UC’s departments of anthropology, geology, geography and biology, including a select group of national collaborative scientists, reveal the economic and environmental impact of ancestral puebloans in Chaco Canyon during the culture’s great preeminence.

“Our goals focused on providing fresh insight into the sustainability of land use practices in Chaco Canyon during the ancestral puebloan occupation,” adds Lentz. “Our findings add new data that reveal measurable changes in the juniper pinyon woodlands that occurred before 600 BC when the food procurement system transitioned from hunting and gathering to agricultural production.”

The shift in ancestral puebloan food resource management enhanced their ability to sustain larger populations in a harsh, barren landscape for several centuries during the pre-Columbian era.

“But with their landscape modifications came serious environmental ramifications. At the cost of major reduction of tree density in the local woodlands, their activities ultimately contributed to a destabilizing environmental impact prior to their final exodus,” adds Lentz.

This innovative interdisciplinary research is a stellar example of academic excellence, an ongoing tenet of UC’s strategic direction called Next Lives Here.

Early pueblo builders of the southwest

Chaco Canyon, a 34,000-acre center of social complexity located in the southwestern region of the US, flourished during the height of the Chaco culture between (800 to 1140 AD), a period Lentz refers to as the Bonito phase.

During the cultural flourishment, the hierarchical society was known for elaborate ceremonial activities, the maintenance of long-distance trade routes and impressive architectural complexes, including more than a dozen immense structures that Lentz and archaeologists refer to as “great houses.” One of the houses, known today as “Pueblo Bonito,” may have had over 600 rooms, including crypts that housed more than 100 burials.

Earlier research revealed a system of roads that connect many Chaco culture sites with evidence of astronomical alignments, indicating that some of the structures were oriented toward the solstice sun and lunar standstills.

Against this backdrop, archaeologists generally agree that Chaco Canyon functioned as a remote trade center and ceremonial site for the Chaco culture. Until now, however, Lentz says studies lacked evidence to support human management of the canyon’s precarious environment for daily living.

It became clear to the researchers that as ancient puebloans tussled with the unpredictable environment, they kept their society thriving for more than 1,000 years through agriculture by growing a variety of crops such as corn, beans and squash in the canyon while simultaneously harnessing local pinyon and juniper tree woodlands for architectural needs, food resources and firewood for cooking.

“This is a very arid area,” says Lentz. “In arid woodlands the trees are essential for holding the soil in place. When the puebloan inhabitants removed those woodlands, the result was eventually severe erosion and the deterioration of croplands.”

The researchers found a gradual degradation of the local woodlands beginning around 600 B.C., much earlier than previously thought, Lentz says. In spite of the woodland clearance, the people living in the canyon flourished for nearly a millennium through indigenous agricultural practices while using water irrigation methods from the nearby Chaco, Escavada and Fajada Wash tributaries.

Research team director, Vernon Scarborough, UC professor of anthropology, emphasizes the highly interdisciplinary character of the project, noting that, “Although the focus of our work was on the identification of ancient ancestral puebloan water systems within this arid environment, past landscape alterations were more broadly brought to light.”

Critical evidence for utilizing the local juniper trees for firewood to cook locally cultivated corn, beans and squash was especially important, says Lentz. The pinyon pine nuts provided a valuable source of food, so the Chacoans protected the pinyon trees from over-harvesting for firewood. But the juniper trees, an excellent source of fuel, were not spared from this extensive harvesting.

“We found a reduction of the pinyon-juniper woodlands, with a loss of mostly juniper trees, happened at about the same time there was an introduction of agriculture into the canyon along with the technology for making pottery,” says Lentz. “Through radiocarbon dating from previous studies, we know that the woodlands were established and flourishing in that area as far back as 5,000 years ago, centuries before the puebloans began the use of agriculture.”

While the juxtaposition of utilizing agriculture and local wood for cooking had shifted the way the puebloans ate and prepared food, the ongoing clearing of the juniper trees placed an inexorable demand on the woodlands, say the researchers, eventually drastically reducing the number of trees.

“In this arid area, rain tends to come in buckets,” says Lentz. “After hundreds of years of thinning out the tree root systems that hold the soil in place, the rain began washing away much of the fertile topsoil, creating an environment that suffered continuous degradation.”

Prior to the emigration of many of Chaco’s residents from the canyon, these unsustainable land use practices resulted in bouts of erosion, which reduced the resilience of the landscape and likely exacerbated the ability of the ancestral puebloans to endure the period of extensive droughts and aridity that followed, says Lentz.

With Chaco Canyon now declared a national park and UNESCO World Heritage site, visitors to Chaco Culture National Historical Park in New Mexico can marvel at the remains of 12 great houses and more than 4,000 areas of archaeological interest in the rocky landscape. The structures and ruins are protected from destruction and development and given national monument designation by President Theodore Roosevelt in 1907.

Because skywatching is deeply ingrained in the site’s past, Chaco Canyon’s 34,000-acre park was proclaimed a dark sky park in 2013, a designation intended to keep it free of light pollution, allowing visitors to see the stars.

“This study markedly enhanced our revelation about the rate and process of early environmental change by ancient societal consumption practices and the climatic fluctuations,” says Scarborough. “This work, as well as that of others, ought to be yet another wake-up call for what is happening to our planet more generally today.”