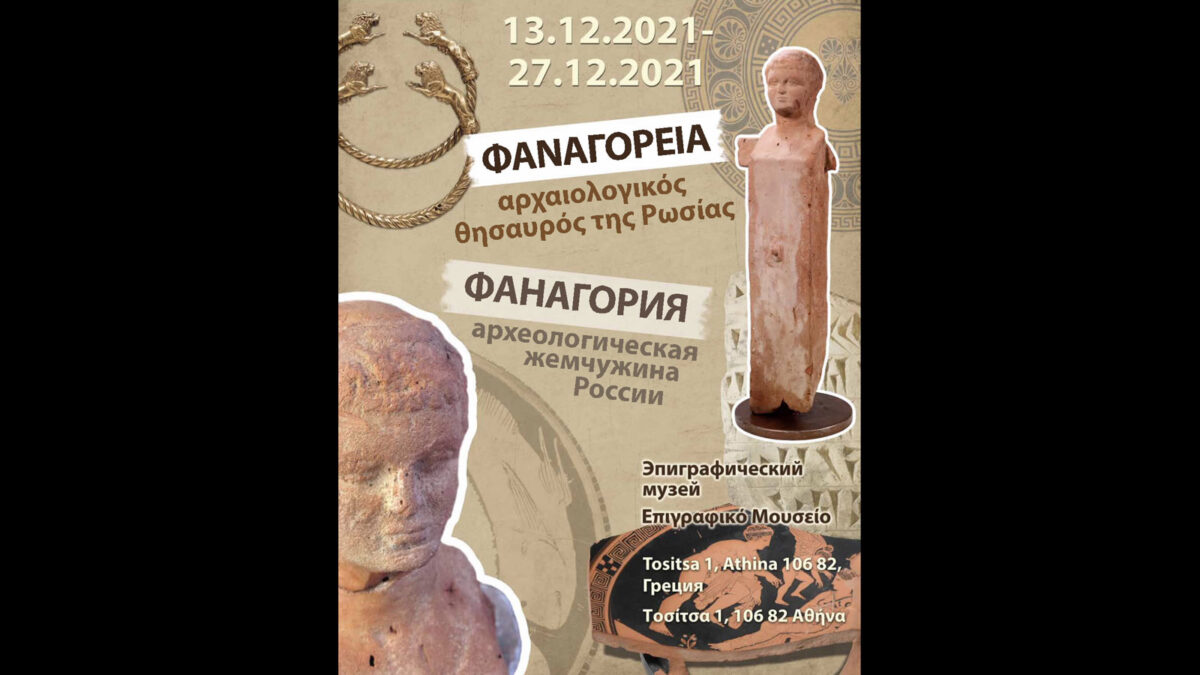 The photography exhibition opened at the Epigaphic Museum

A photography exhibition entitled “Phanagoria, an archaeological treasure of Russia” opened on Monday, December 13 at the Epigraphic Museum, with the start of the Days of Russian Spiritual Culture in Greece as part of the Year of Greek-Russian History. The opening took place in the presence of the special representative of the Greek Prime Minister and Deputy Co-President of the Year Elias Klis, Director of the Department of Museums and Foreign Relations of the Russian Ministry of Culture and Head of the Russian Delegation Alexander Voronko, Director of the Epigraphic Museum Athanasios Themos, and Director of the “Phanagoria”, State Historical and Archaeological Museum-Park Vladimir Kuznetsov. The opening was followed by a discussion on “The role of the historical museums of Russia and Greece in preserving historical and cultural heritage”, with the participation of directors of archaeological museum-parks and other institutions from Russia, heads of museums from Greece and heads of departments from the Greek Ministry of Culture.

“This is a very interesting exhibition which gives us the opportunity to get better acquainted with the work carried out there and with the region’s antiquities. We are very happy to have you with us, because you are not just visitors, but will also be taking part in a very interesting discussion where we will learn much more about the museums of southern Russia,” said Athanasios Themos in his welcoming speech. Head of the Russian Delegation Alexander Voronko began his reply by thanking the director of the Epigraphic Museum, “because of whom we can launch a unique exhibition in this space and realize the discussions that will follow”. He then noted that “this exhibition is really unique, because the “Phanagoria” archaeological park-museum itself is unique. Thus, the name of the exhibition “Phanagoria, an archaeological treasure of Russia” is perfectly suited to this museum”.

For his part, Elias Klis, having thanked the Russian Ministry of Culture for including this particular meeting in the programme of the Days of Spiritual Culture of Russia in Greece, underlined that “there are historical reference points in the region from a presence of centuries of Greek culture “and that “today’s meeting may give us the opportunity of becoming better acquainted not only with such an important archaeological site as Phanagoria but also with others which unite us”.

“I have visited Greece many times, but I never thought that I would be lucky enough to have the opportunity of presenting to the descendants of the ancient Greeks an exhibition in honour of the city to which I have dedicated my whole life. I am deeply grateful and honoured and I hope that those who visit this exhibition will find that, although Phanagoria is in a far corner of the world, like a drop of water it reflects all the achievements of ancient Greek culture, both material and spiritual”, said Vladimir Kuznetsov.

Phanagoria is one of the largest ancient Greek cities in Russia. It is located on the Taman Peninsula, on the shores of the Kerch Strait. The total area of the city is over 60 hectares. About a third of it is nowadays below sea level. The city was founded in the middle of the 6th century B.C. and destroyed by an enemy invasion at the beginning of the 10th century AD. The 1,500 years of Phanagoria’s existence are reflected in successive excavation layers, which constitute an embankment six to seven meters thick. Found in it was a huge number of various artefacts, ruins of private and public buildings, fragments of statues, Greek inscriptions, coins, ceramics and more.

One of the most important advantages is the fact that no modern building was erected on the spot of the ancient city. This allows the realization of any programme at this archaeological site, whether scientific, educational, museum or tourist related. The expedition from the Archaeological Institute of the Russian Academy of Sciences has been conducting scientific research in Phanagoria for many decades, which has intensified over the last fifteen years. Participating in the work today are a large number of scientists of various specialties such as historians, archaeologists, anthropologists, archaeo zoologists, numismatists, epigraphists, biologists, geologists and others. The expedition has its own research center with specialized equipment and a library. Archaeological research is carried out in several parts of the city, in the necropolis and in the part of the city that is below sea level. Numerous finds are included in the collection of the State Archaeological Museum that opened in 2014.