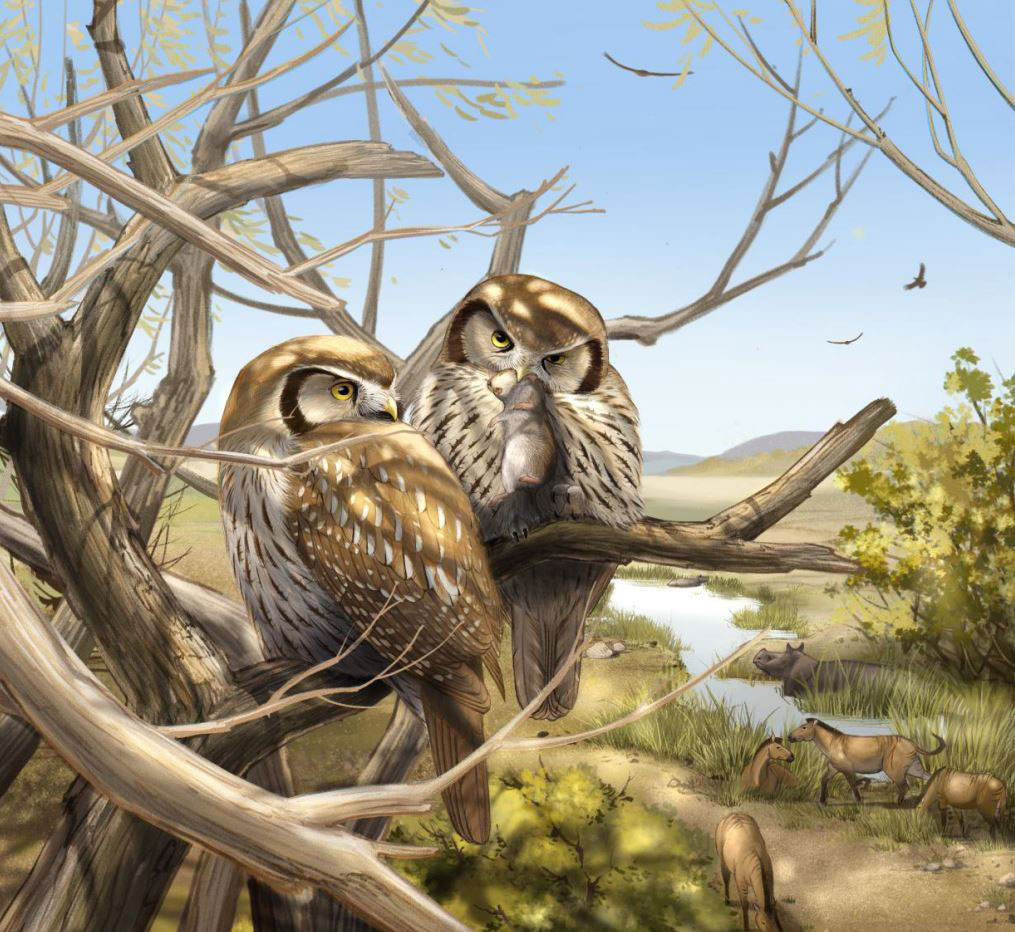 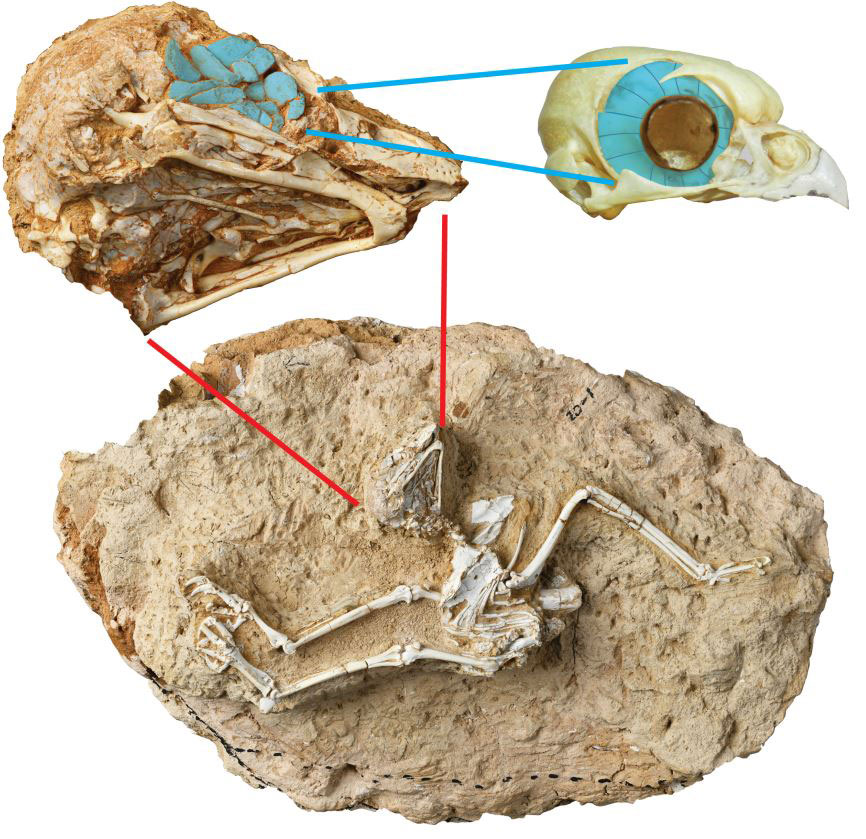 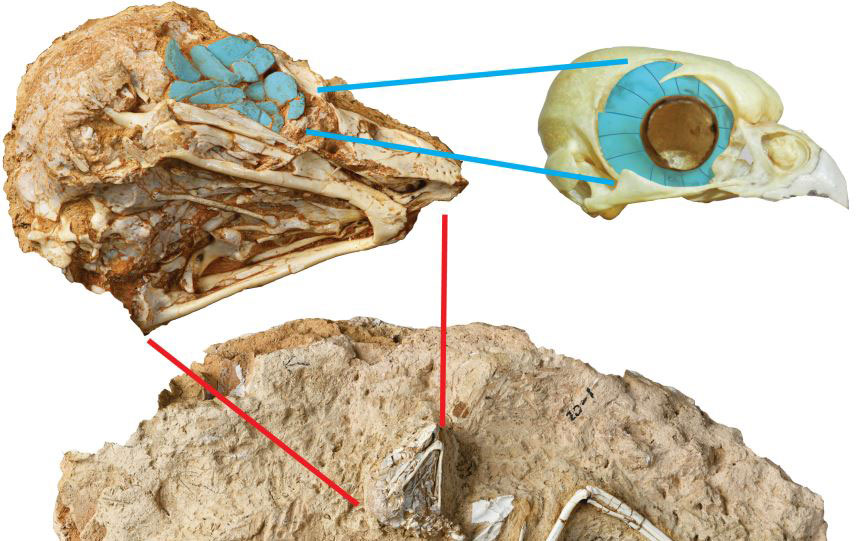 A research team led by Dr. LI Zhiheng and Dr. Thomas Stidham from the Institute of Vertebrate Paleontology and Paleoanthropology (IVPP) of the Chinese Academy of Sciences has discovered the amazingly well-preserved fossil skeleton of an extinct owl that lived more than six million years ago in China. Their detailed study of the skeleton’s fossilized eye bones shows the owl was active in the daytime, not the night.

The team’s findings were published in Proceedings of the National Academy of Sciences (PNAS) on March 28.

The fossil skeleton comes from rocks deposited during the late Miocene Epoch at an elevation greater than 2,100 meters (nearly 7,000 feet) in the Linxia Basin of China’s Gansu province, at the edge of the Tibetan Plateau. The fossil preserves nearly the entire skeleton from the tip of the skull through the wings and legs to the tail bone, along with body parts that rarely seen as fossils like the bones of the tongue apparatus called the hyoid, the trachea, the kneecap, tendons for wing and leg muscles, and even the remnants of its last meal of a small mammal.

This extinct species is the first record of an ancient owl being diurnal, or active during the day. The researchers named the species Miosurnia diurna in reference to its close living relative, the diurnal Northern Hawk Owl (Surnia ulula). The features of the skull and skeleton, including a large bump on part of the cheekbone just behind the eye, show that Miosurnia is a part of the global owl group Surniini. Their research shows that the Surniini, which includes Miosurnia, the Northern Hawk Owl, and pygmy owls, rejected the night millions of years ago.

Owls stand out from most other birds because of their largely nocturnal activities. However, many people may not realize that a few species of owls are actually largely diurnal.

“It is the amazing preservation of the bones of the eye in this fossil skull that allows us to see that this owl preferred the day and not the night,” said Dr. LI, first author of the study.

Scleral ossicles are small bones that form a ring around the pupil and iris in the outer region of the eye. Nocturnal animals require overall larger eyes and bigger pupils to see in low-light conditions, but diurnal animals have smaller eyes and pupils.

In the Miosurnia diurna fossil, the soft parts of the eye had decayed long ago, leaving the small trapezoidal scleral ossicles randomly collapsed into the owl’s eye socket. For this reason, the paleontologists had to measure these individual small bones and do some basic geometry to rebuild the size and shape of the ring around the eye.

“It was a bit like playing with Lego blocks, just digitally,” said Dr. Stidham, describing how the 16 little similar bones overlap each other to form a ring around the iris and pupil. He said that putting them back together correctly allowed the scientists to determine the overall diameter of the ring and the opening for light in the middle.

The IVPP scientists conducted detailed statistical analyses, comparing the fossil owl’s scleral ossicles with the eyes of 55 species of reptiles and more than 360 species of birds including many owls. Looking at the size and shape of the fossil’s eye and its relatively smaller opening for light, the scientists determined that it most resembles the eyes of living owls in the Surniini group, which is largely not nocturnal.

In addition, the scientists conducted a larger statistical analysis, known as an ancestral state reconstruction, using behavioral data from over 360 species across a diversity of birds. The researchers used the avian family tree to reconstruct the ancestral habits of birds, including owls, to determine which were likely nocturnal or diurnal.

Their results show that the ancestor of all living owls was almost certainly nocturnal, but the ancestor of the Surniini group, was instead diurnal. When the scientists added the Miosurnia diurna fossil into the analysis, the probability that the ancestor of Surniini was diurnal increased to 100%. Both lines of evidence from behavior and the eye itself point to the evolution of diurnal behavior in this owl group.

“This fossil skeleton turns what we thought we knew about the evolution of owls on its head,” said Dr. LI. Dr. Stidham adds that Miosurnia diurnia is the first record of an evolutionary process spanning millions of years and stretching across the globe whereby owls evolved to “reject the night for some fun in the sun”.