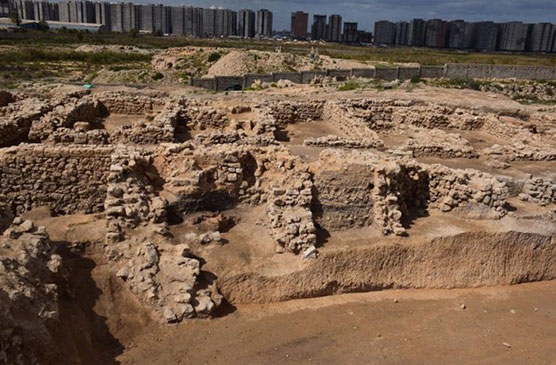 It manufactured amphorae and pottery during the Graeco-Roman period

Archaeologists have uncovered an amphora workshop at Tabba Matouh in west Alexandria, Egypt.

The site manufactured amphorae and pottery during the Graeco-Roman period and also served as a storage warehouse.

Amphorae have a pointed bottom and were used for the transportation of various products, both liquid and dry, but mostly for wine by land or sea trade routes.

The workshop was discovered by an Egyptian archaeological mission and consists of a group of kilns which were operated throughout different periods in history.

Whilst amphorae production was mainly during the Roman period, the workshop was later used for the production of lime possibly in the Byzantine period. Evidence also shows activity during the Middle Ages where the site was repurposed as a cemetery.

To the south of the ovens is a structure that served as a warehouse for the amphorae, also containing large cooking pots and tableware, whilst a group of limestone buildings consisting of thirty rooms were used as temporary accommodation for the workers and food preparation.

Within the group of buildings, the researchers found firewood, amphorae, small statues and animal bones, in addition to Ptolemaic coins bearing the faces of Alexander the Great and Queen Cleopatra.