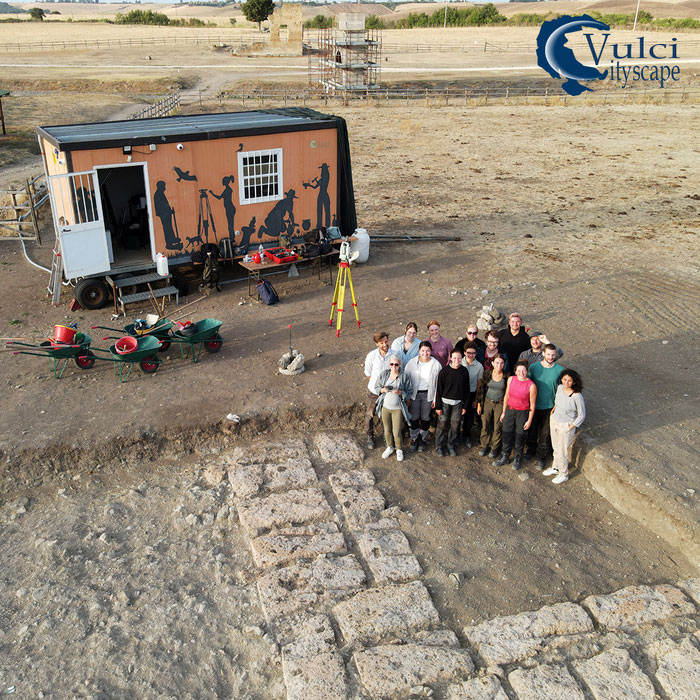 Near the Tempio Grande in Vulci

An interdisciplinary team headed by archeologists Dr. Mariachiara Franceschini of the University of Freiburg and Paul P. Pasieka of the University of Mainz has discovered a previously unknown Etruscan temple in the ancient city of Vulci, which lies in the Italian region of Latium. The building, which is 45 meters by 35 meters, is situated west of the Tempio Grande, a sacred building that was excavated back in the 1950s. Initial examination of the strata of the foundation of the northeast corner of the temple and the objects they found there, led the researchers to date the construction of the temple towards the end of the sixth or beginning of the fifth century BCE. “The new temple is roughly the same size and on a similar alignment as the neighboring Tempio Grande, and was built at roughly the same Archaic time,” explains Franceschini. “This duplication of monumental buildings in an Etruscan city is rare, and indicates an exceptional finding,” adds Pasieka. The team discovered the temple when working on the Vulci Cityscape project, which was launched in 2020 and aimed to research the settlement strategies and urbanistic structures of the city of Vulci. Vulci was one of the twelve cities of the Etruscan federation and in pre-Roman times was one of the most important urban centers in what is now Italy.

“We studied the entire northern area of Vulci, that’s 22.5 hectares, using geophysical prospecting and Ground Penetrating Radar,” explains Pasieka. “We discovered remains from the city’s origins that had previously been overlooked in Vulci and are now better able to understand the dynamics of settlement and the road system, besides identifying different functional areas in the city.” The researchers were able in 2021 to uncover the first sections of the wall, made of solid tuff. “Our knowledge about the appearance and organization of Etruscan cities has been limited until now,” says Franceschini. “The intact strata of the temple are offering us insights into more than a thousand years of development of one of the most important Etruscan cities.”

Over the coming years scientists want to study the different phases of use and the precise architectural appearance of the temple in more depth, in order to learn more about the religion of the Etruscans, the social structures in Vulci and what the lives of the city’s inhabitants were really like.

The project is being funded by the Fritz Thyssen Foundation (2020-2022) and the Gerda Henkel Foundation (2022-2023) along with the University of Mainz’s research area “40,000 Years of Human Challenges: Perception, Conceptualization and Coping in Premodern Societies”. The departments of classical archeology at the University of Freiburg and at the University of Mainz are working together with the Vulci Foundation, which administers the archeological park “Parco Naturalistico Archeologico di Vulci”, and the Italian national monument authority, Soprintendenza Archeologia, Belle Arti e Paesaggio per la Provincia di Viterbo e per l’Etruria meridionale.