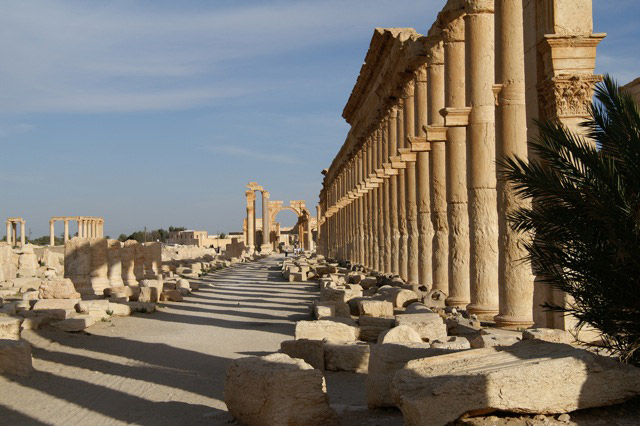 In ancient Roman times A.D., Palmyra was the most important point along the trade route linking the east and west, reaching a population of 100 000 inhabitants. But its history has always been shrouded in mystery: What was a city that size doing in the middle of the desert? How could so many people live in such an inhospitable place nearly 2 000 years ago? Where did their food come from? And why would such an important trade route pass directly through the desert?

“These findings provide a wealth of new insight into Palmyra’s history,” says project manager Jørgen Christian Meyer, a professor at the University of Bergen. The project has received funding of over NOK 9 million from the Research Council of Norway’s comprehensive funding scheme for independent basic research projects (FRIPRO).

The Bergen-based archaeologists approached the problem from a novel angle – instead of examining the city itself, they studied an enormous expanse of land just to the north. Along with their Syrian colleagues from the Palmyra Museum and aided by satellite photos, they catalogued a large number of ancient remains visible on the Earth’s surface.

“In this way,” explains Professor Meyer, “we were able to form a more complete picture of what occurred within the larger area.”

The team detected a number of forgotten villages from ancient Roman times. But what finally solved the riddle of Palmyra was the discovery of the water reservoirs these villages had utilized.

Professor Meyer and his colleagues came to realise that what they were studying was not a desert, but rather an arid steppe, with underground grass roots that keep rain from sinking into the soil. Rainwater collects in intermittent creeks and rivers called wadi by the Arabs.

The archaeologists gathered evidence that residents of ancient Palmyra and the nearby villages collected the rainwater using dams and cisterns. This gave the surrounding villages water for crops and enabled them to provide the city with food; the collection system ensured a stable supply of agricultural products and averted catastrophe during droughts.

Local farmers also cooperated with Bedouin tribes, who drove their flocks of sheep and goats into the area to graze during the hot season, fertilising the farmers’ fields in the process.

Palmyra’s location also had a political foundation. Important east-west trade routes, including along the Euphrates River to the north, were not under the control of the Romans to the west or the Persians to the east. Local lords and chieftains demanded high fees for passage.

This practice of extortion translated into a tremendous opportunity for the Palmyrians; they joined forces with the Bedouins to provide security, beasts of burden and guides through the desert.

“Tradesmen from Palmyra made the most of the city’s unique location to build up a comprehensive trade network,” says the professor. “This explains much of the city’s prosperity.”

Arable land in this time of need

The solution to the mystery of Palmyra can also teach us something today. As the world seeks arable land to feed its billions, we can learn from the Palmyrians’ experience. If they were able to cultivate the desert soil almost 2 000 years ago, surely we can do the same with all the available modern aids and methods.

“Occasionally an enormous amount of rain falls in the desert,” says Professor Meyer. “Anyone can see how green the desert becomes after the rain. The Palmyrians must have realised the potential of this type of land, which covers large areas of our planet.”