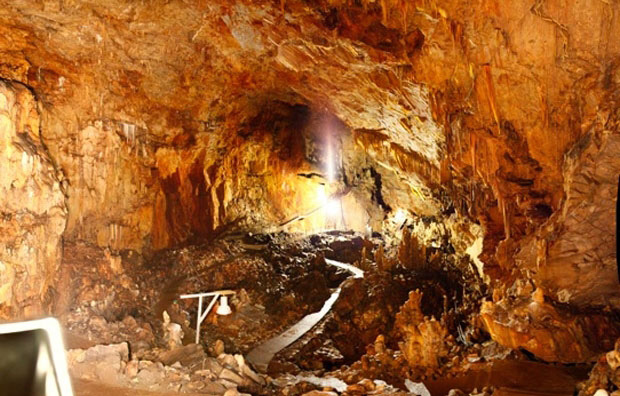 A Field Museum curator is digging around a cave in Southern Greece that’s been compared to the mythical underworld, Hades. That cave might help explain why people choose to migrate to big cities or high tail it to the suburbs.

William Parkinson is the associate curator of Eurasian anthropology at the Field Museum. He is on a research team, called The Diros Project, made up of two Greek and two American archaeologists.

They are excavating Alepotrypa Cave, which is nearly four football fields long. The researchers compare the most striking room in the cave to a Cathedral.

“It’s a very awesome place, in the literal sense of the word,” Parkinson said. “I can only think that, several thousand years ago, when it was lit by torches, not by electric lamps like it is now, it would have been all that more striking.”

They have unearthed tools and pottery that remain from a Neolithic community between 5,000 and 8,000 years ago. Under the dripping stalactites, skeletons dating as far back as 8,000 years rest under layers of sediment.

“It’s the closest thing we have to something like a Neolithic Pompeii in the Mediterranean,” Parkinson said.

Alepotrypa was not resettled by later civilizations, so the authenticity is extraordinary, Parkinson said.

The settlers used the cave as a shelter, a cemetery and a sacred worship place. The population expanded outside of the cave and bloomed into an early urban center.

The pottery and “ancient people’s garbage” the settlers left behind are the strongest evidence of a densely populated village, Parkinson said. A two-by-two meter unit revealed more than 30 pounds of pottery. The archaeologists unearthed materials and pottery styles from different regions, which indicate economic activity and a mingling of cultures.

“If you’re in an area where there is more trade more interaction, there’s more variety in not just in food, but in life and the people you meet,” Parkinson said. People may have gravitated toward Alepotrypa just for the sake of “wanting to live together.”

But Parkinson said all life in Alepotrypa abruptly ended, around 5,000 years ago, when the cave’s population was most dense and dynamic. The cave entrance collapsed, possibly due to an earthquake. The cave’s occupants were buried alive.

After the collapse, settlers outside the cave fled the peninsula. Even today, the area surrounding the cave is scarcely populated.

Paul Kondraros shared photos of his family in Diros, a village in Southern Greece. He said his uncle discovered Alepotrypa Cave when he was hunting with his dog.

Kondraros has a startling connection to Alepotrypa. He claims his uncle discovered the cave and is responsible for the name, which means “fox hole” in Greek.

Kondraros said his uncle was out hunting with his dog in the late 1950s, when the dog took off in pursuit of a fox and darted into a small hole.

“After two hours or so, the dog never came out,” Kondraros said. He said his uncle widened the hole and ventured inside. That hole, he said, was the opening to Alepotrypa Cave.

Anastasia Papathanasiou, a Diros Project archaeologist who works for the Greek Ministry of Culture, said the story “might be true,” but adds that there are several different tales of discovery circulating in the village.

An even greater legend, from Greek mythology, might be linked to Alepotrypa.

The first archaeologist to dig inside Alepotrypa was 90-year-old Greek Archaeologist Giorgos Papathanassopoulos, in 1970. He’s spent 40 years studying the relics of the cave’s Neolithic people and describes feeling a sense of awe when he imagines what their lives might have been like.

“To this day, the richness and variety of the findings never cease to amaze me,” Papathanassopoulos said in an e-mail. “There is abundant scientific work for at least three more generations.”

His initial findings included kilos of painted funeral vases and the remnants of blazing funeral rituals, Papathanassopoulos said. During the ceremonies, people intentionally broke pottery and set the cave walls on fire.

These rituals “combined with the impressive, enormous hall,” lead Papathanassopolos to an intriguing theory. He posited that the Neolithic people believed the cave was Hades.

“You can easily see why Giorgos would make that hypothesis,”Diros Colleague Michael Galaty said. “The cave really does recall the underworld, Hades and the River Styx.”

She and the other team members have their sights set on big sociological questions: What was it about this cave that attracted people from all over the region? And why did they leave?

What attracted people to Alepotrypa Cave?

The reason for the exodus might help us understand why modern people migrate, The Field’s Parkinson said. The source that brought people to the region was cut off, and the settlers outside the cave fled. Parkinson said they also may have abandoned the village due to the stresses of urban life like crime and disease.

“People had never lived in groups this big before, and then they decide ‘This isn’t working,’” Parkinson said. “Rather than dealing with the social stresses of having to live with your neighbor or on top of your neighbor, people just choose to establish settlements elsewhere.”

The diversity of urban life could have been what made Alepotrypa so attractive to Neolithic settlers.