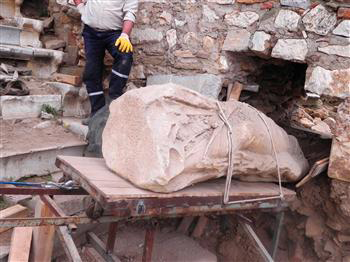 It has been dated to the Late Hellenistic period

A headless and dressed female statue has been revealed at the ancient Metropolis (İzmir’s Torbalı district), during excavations conducted at the site. Turkish archaeologists have dated it to the Late Hellenistic period.

The excavations of the ancient city have started 22 years ago, but still reveal new finds and interesting artefacts. The surveys, a collaboration of the Culture and Tourism Ministry, Trakya University, the Metropolis Association and the Torbalı Municipality, are sponsored by the Sabancı Foundation.

Professor Serar Aynek, director of the excavations, said the statue was found buried in the city walls. It is 2 meters high.

Zerrin Koyunsağan, General Director of the Sabancı Foundation, said that the statue possibly depicts a female ruler of the city. As the Sabancı Foundation is promoting projects on the issue of social gender in Turkey, Mr. Koyunsağan pointed out that the statue is important to the Foundation, because it possibly reflects an era when women had significant roles in society and city management.