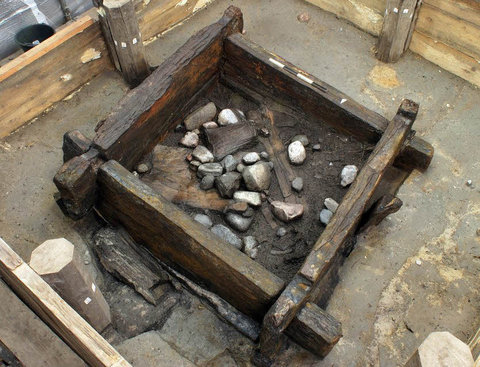 The first carpenters in Europe

A research published in the December 19, 2012 issue of the open access journal Plos One by Willy Tegel and colleagues from the University of Freiburg (Germany) offers a detailed insight into the oldest wood architecture and displays the technological capabilities of humans ca. 7,000 years ago.

The four wooden water wells made out of oak timbers were excavated during the last few years near Leipzig (Eastern Germany). Willy Tegel and his colleagues studied the finds, and found out that these first carpenters of Neolithic farming communities were also impressively skilled craftsmen.

In paticualr, a  total of 151 oak timbers preserved in a waterlogged environment, were dated by the method of dendrochronology, to 5469-5098 BC.

The wells were made long before the discovery of metal and its use in the manufacture of tools. This fact questions previous assumptions that metal tools were requested for complex wooden structures, such as the ones unearthed in Eastern Germany.

The wells were made by using stone adzes of different sizes to produce finely cut timbers and then employing sophisticated wooden corner joining and log constructions through wedge tusk tenon joints and interlocked corner joints. Bone chisels were probably also used in the manufacture of the wooden structures.

The team’s results question the principle of continuous evolutionary development in prehistoric technology, and contradict the common belief that metal was necessary for complex timber constructions.