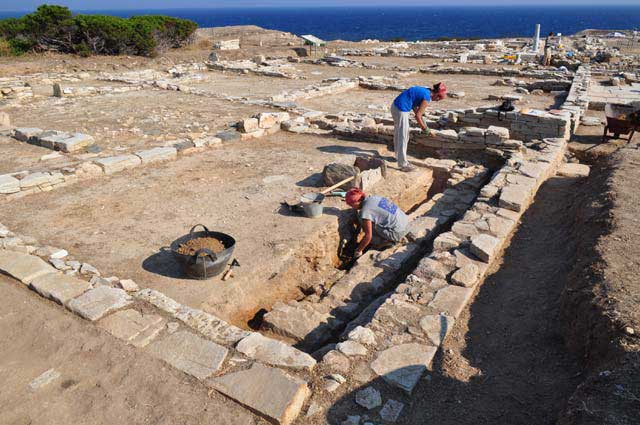 The important excavation, which is being conducted in the last few years, on the little island Despotikon and the islet Tsimindiri, near Antiparos, by the 21st Ephorate of Prehistoric and Classical Antiquities, and directed by archaeologist Giannos Kouragios, will continue.

After receiving the approval of the Central Archaeological Council and obtaining grants from the Kanellopoulos and Latsis Foundations, the new five-year excavation program is expected to reveal parts of a significant Archaic sanctuary, dedicated to the cult of Apollo and Artemis. The inhabitants of Paros built this temple on Despotikon, as a sign of their predominance in the Aegean.

During the excavations, the tower and the two rectangular buildings will also be investigated, which haven’t been excavated yet. In addition, the numerous rooms of the southern complex on Despotikon will be examined. The archaeological surveys will also include the five buildings revealed on Tsimindiri.

Up to now, 12 buildings have been located on the uninhabited islet of Depotikon, and 5 on Tsimindiri, which in the past was connected by an isthmus to Despotikon. Among many finds, in the sanctuary archaeologists have found 20 marble bases of Archaic statues, 65 parts of Kouroi, the head of a Kore, and part of a marble Archaic life-sized Kouros, which was revealed this year on the island.

Archaeologists also plan a small scale restoration of the sanctuary –namely the elevation of some columns, so that the third dimension of the temple can be recovered, which at some point in the past reached eight meters in height. Of course before doing that they would have to receive the “green light” from the Central Archaeological Council. As for the vision of archaeologists Giannos Kouragios, to create an archaeological park on Despotikon, for now it remains unfulfilled, due to the peculiar ownership situation of the islet.