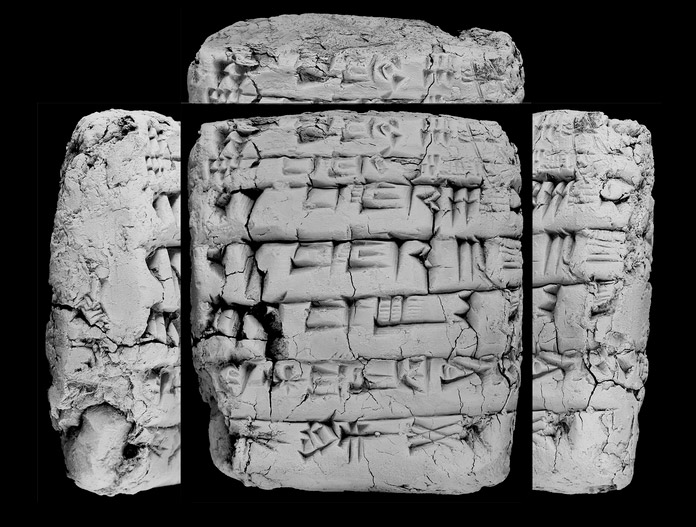 A vast collection of cuneiform tablets looted from Iraq and donated to Cornell University by a private collector will be returned to Iraq in what is considered one of the largest returns of antiquities by an American university.

The 10,000 inscribed clay blocks date from the 4th millenium BC. Among them scholars have identified the private archive of a 21st century BC Sumerian princess in the city of Garsana that has made scholars rethink the role of women in the ancient kingdom of Ur. Other tablets provide detailed administrative records of ancient life, including the procedures for temple rituals, the resettlement of refugees and the output of agricultural lands.

“It’s our first real archival discovery of an institution run by a woman,” said  David Owen, the Cornell researcher who has led the study of the tablets, with regard to the princess’ archive where it is shown that during her reign, women attained remarkably high status. They supervised men, received salaries equal to their male counterparts’ and worked in construction, the clay tablets reveal. However, as scholars do not know precisely where the tablets were found, the site of ancient Garsana cannot be excavated for further information.

In 2000, New York antiquities collector Jonathan Rosen and his family began donating and lending the tablets to Cornell University. Many scholars have objected to the arrangement, suspecting the tablets were looted in Iraq after the 1991 Gulf War, which unleashed a wave of plundering in the archaeologically rich expanse of southern Iraq between the Tigris and Euphrates rivers. Already in 2001, the source of the Garsana tablets was the subject of a 2001 investigation by the Department of Homeland Security, according to records obtained by Harvard researcher Benjamin Studevent-Hickman under the Freedom of Information Act. Buying and possessing antiquities illegally removed from countries such as Iraq, which claim them as government property, can be a violation of U.S. law.

Investigators also looked into potential violations of the Trading With the Enemy Act, which at the time barred doing business with Iraq, and tax fraud, the records said. The 1,679 tablets were valued at less than $50,000 when they were imported, but the donor received a $900,000 tax deduction when they were given to Cornell in 2000, the records said. However, due to incoinclusive evidence on  when or where the objects were found, there were no findings of wrongdoing.

“It has always been the Rosen family’s intent that these tablets reside permanently in a public institution for scholarly research and for the benefit of the public as a vast informational tool in explaining life in the ancient world,” says Harold Grunfeld, attorney for Jonathan Rosen.

Last year, the Iraqi government requested the return of the tablets and the U.S. attorney’s office in Binghamton, N.Y., is brokering the transfer. Cornell officials declined to comment pending a formal announcement but issued a statement saying that the university “appreciates the opportunity it has had to participate in the preservation and study of these invaluable historical artifacts and welcomes the opportunity to continue this work in participation with the U.S. and Iraqi governments.”

Damage from illegal excavations in Iraq has far exceeded the more notorious thefts from the Iraqi museum in 2003, experts say. At the ancient Sumerian city of Umma, for example, thousands of tablets like those at Cornell have been found by looters who have dug pits over an area the size of 3,000 soccer fields in search of new finds. At the height of the looting, an estimated 150,000 cuneiform tablets were being stolen from Iraq every year.

Some have questioned whether Iraq is stable enough to care for the delicate tablets once they are returned. About 600 antiquities that the U.S. returned to Iraq in 2009 later disappeared. “We know there are problems there, but the Iraq museum seems to be secure at this point,” said Richard Zettler, a curator at the University of Pennsylvania Museum, which will soon return tablets borrowed from Iraq decades ago. “The real thing is, they belong to Iraq.”

With the illegal antiquity trade being a problem, scholars adopted a 2004 policy that required the permission of Iraqi authorities before publishing studies of objects that may have been looted, a step that Cornell has not taken.

Many American universities have recently agreed to return ancient art after evidence emerged that the objects might have been recently looted. Last year, Princeton University returned about 170 objects and fragments to Italy after authorities there linked them to antiquities dealer Edoardo Almagià, who was investigated for trafficking in looted objects. That same year, Ohio’s Bowling Green State University signaled it was willing to return a dozen ancient mosaics to Turkey after evidence emerged that they had been looted.

Such cases often involve universities accepting donations from antiquities dealers, raising complex questions about the role that academia plays in a market that is rife with recently looted objects. Cornell’s acceptance of the cuneiform tablets from Rosen -a business partner with infamous antiquities dealer Robert Hecht- has stirred controversy among scholars who contend that publishing studies of antiquities that were possibly looted increases their value on the art market and fuels the illegal digging seen across the region in recent years.

Scholars such as Owen, the Cornell Assyriologist who has led the research of the Rosen tablets. Owen has argued that ancient texts should be studied regardless of how they were excavated. To do otherwise, he said, would be to forsake valuable information about the ancient world.

Thanks to funding provided by Rosen, Owen and a team of international scholars have worked with experts at UCLA to carefully conserve, photograph and study the tablets, publishing their work in more than 16 volumes over six years.

“Study of these cuneiform tablets is providing much new data on the history, literature, religion, language and culture of ancient Iraq that is filling major gaps in our knowledge of Mesopotamian civilization,” Owen said in a statement released by Cornell.