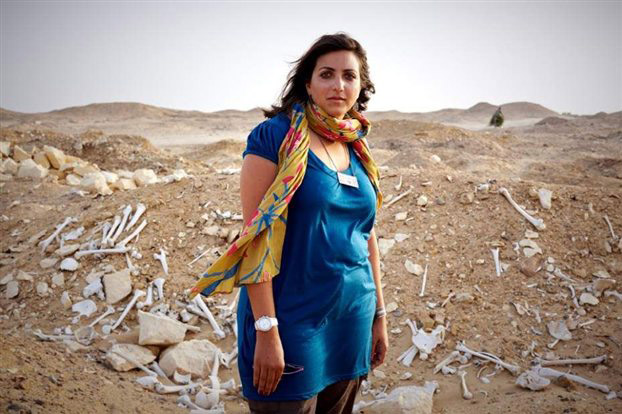 Monica Hanna, the archaeologist and heritage specialist known for her work in recording and protecting the endangered monuments of her home country Egypt, is to receive an award for her activity by SAFE, a non-profit organization dedicated to raise awareness about antiquity damage, theft and illegal trafficking. As reported in the SAFE website,

“The archaeologist Dr. Monica Hanna will be the next recipient of the SAFE Beacon Award for her exemplary efforts in shedding light on the looting situation in Egypt”.

As it is stated in the announcement, the situation in Egypt with regard to looting “has become increasingly acute”. But “indefatigable Egyptian archaeologist Monica Hanna has been single-handedly exposing an incredible amount of looting in Egypt, even going so far as to confront some of the armed looters herself”.

“While mainstream media reports about the nature and extent of the damage – and those responsible for the damage – have been numerous and sometimes conflicting, we can be thankful for the efforts of “ordinary” Egyptians who have joined together to use social media to keep the rest of the world informed about what is happening to Egypt’s heritage […]. Using social media tools to their fullest potential, Dr. Hanna created and steadfastly maintains Egypt’s Heritage Task Force, while also contributing to other social media platforms. She continues to inform us in lectures and interviews, and she mobilizes others to do the same”.

Apart from honouring Hanna, SAFE is reporting that their website will continue to cover her work.