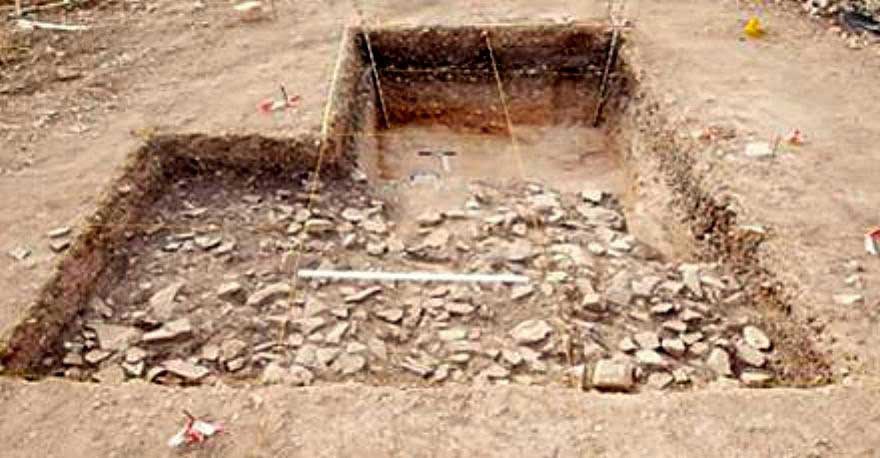 The hunting site of Vretsia-Rhoudias

Excavations and results of 2013

After a year’s gap, the archaeological investigations conducted by the Department of History and Archaeology of the Aristotle University of Thessaloniki at the early Epipalaeolithic site of Vretsia-Roudias in the Troodos mountains (Pafos District) continued in 2013. The project was carried out over twelve days in November 2013 by a small team of Archaeology students, under the direction of Professor Nikolaos Efstratiou. This year’s aims were to continue the excavation of trenches that had been opened in 2011 but also to investigate a larger area by opening new trenches.

More specifically, the team attempted to find the limits and understand the character of the ‘stone feature’, which is composed of an extensive layer of stones that had been identified during previous excavation seasons in a central location of the site. In addition, investigations focused on confirming the site’s impressive stratigraphy, especially its deeper layers which are the most intriguing since they comprise sealed deposits. Another aim was to collect more material, mainly organic remains which unfortunately are not well-preserved in the specific environment.

This year’s results at Vretsia-Rhoudias may be summarized as follows:

– The excavation of the two trenches that had been opened during previous seasons was completed, while three new trenches were opened. The excavation reached the natural bedrock and the excavated area was extended to the east.

– The extent of the ‘stone feature’ seems to be large and it seems to extend towards the east. Its man-made character is confirmed but its exact use remains unknown although it is covered by a layer rich in lithics which show traces of heavy burning (fragments of stone vessels, raw material, grinders and pounders).

– The deep succession of archaeological layers was confirmed, which reach 1.30 m. in depth. This is one of the deepest deposits of the late Pleistocene and early Holocene on the island of Cyprus and it survives very clearly without presenting any areas of disturbance.

– The lithic material that was collected (which seems to have been found in situ) is useful for the dating of this microlithic tradition that can be documented mainly in the deeper layers of the site (micro-burins, micro-blades).

– The large quantity of tools collected during the 2013 excavation season (amounting to over 3,000) is expected to help answer the dominant question as to whether the obviously different tradition in lithic technology at the site of Vretsia-Rhoudias compared to that of other sites such as Akrotiri-Aetokremnos, Agia Varvara-Aetokremnos and Agios Tychonas-Klimonas, is the result of a long, local, inland (?) development (perhaps even of the Pleistocene) or whether it simply fills in the ‘gap’ in our knowledge of the island’s prehistory (first half of the 10th millennium BC).

– Amongst the moveable finds of the 2013 fieldwork were large stone tools (grinders, pounders), fragments of possible stone vessels and a small number of stone beads.

The 2013 excavation season has confirmed the importance of this Epipalaeolithic campsite at Vretsia-Rhoudias with regards to Cyprus’ early prehistory. Whether it represents a distinct version of the inland Aceramic Neolithic A or as another older tradition on the island, it is expected that the site is likely to shed light on the early cultural processes that occurred in the wider area of the Middle East.