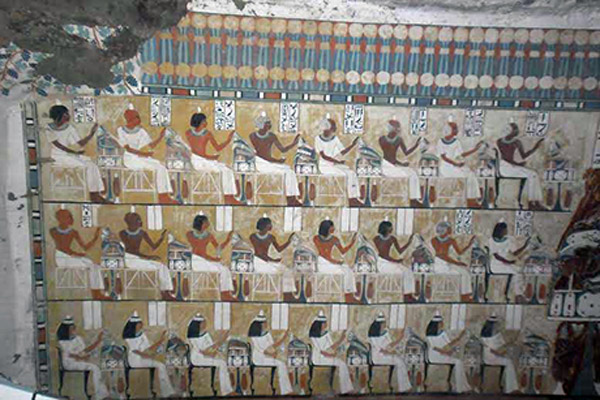 A set offour  rock-hewn, richly decorated tombs were accidentally brought to light in Elephantine, the Neilotic island facing the city of Aswan, in Egypt.

According to a report by the Minister of Antiquities Mohamed Ibrahim, preliminary results from inspecting the tombs’ wall paintings give the monuments a New Kingdom date, and restoration is to take place in order for the monuments to be accessible to visitors.

Ali El-Asfar, head of the Ministry’s Ancient Egyptian Antiquities section, points out that one of the tombs is ascribed to a leading official of Elephantine named User, who was active during the New Kingdom. In a scene from his tomb, User is depicted  dressed in a leopard’s skin along five other men bearing symbols of priesthood, performing religious activities in front of an offering table. In other cases he is shown with his family and deities.

Another of the newly found tombs seems to belong to a man named Ba Nefer, superintendant of the gods’ priests of Elephantine. His tomb is also engraved with scenes depicting him in different positions with his family and deities.

A third tomb belongs to Amenhotep, sealbearer for the governor of Upper Egypt and Elephantine. According to a report by the Head of Aswan monuments Nasr Salama, the tomb has a distinguished façade decorated with hieroglyphic texts without any scenes. Its inner walls are decorated with scenes depicting the deceased with his wife, the purification priest and the field scribe.

Finally, the fourth tomb belongs to User Wadjat, another governor of Elephantine.