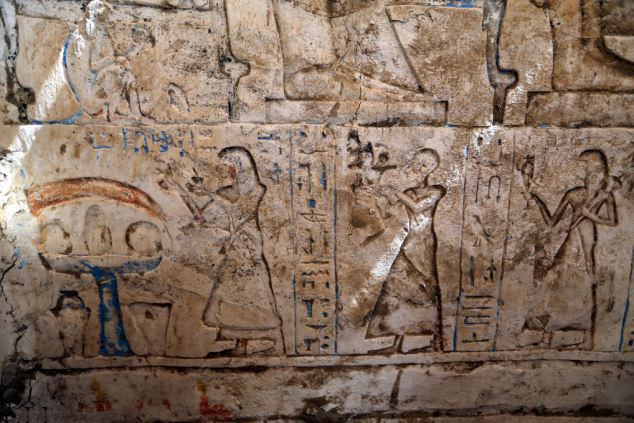 A hitherto unknown, temple-shaped late New Kingdom tomb of a nobleman was revealed in Saqqara, near Cairo, by an Egyptian team of archeologists led by former dean of Cairo University’s Faculty of Archaeology Professor Ola El Aguizi.

According to a statement released by the Egyptian Ministry of Antiquities, the tomb  is described as consisting of a portico entrance, pillars hall and a peristyle court, which contains the main burial shaft in the centre and opens directly onto a sanctuary with three rooms. Such temple-shaped tombs were common in Saqqara during the New Kingdom, as the area’s bedrock quality did not allow the making of rock-cut tombs of the type known from the Theban area and elsewhere.

According to tomb  inscriptions, the main tenent was a man named Paser, who served as Egypt’s royal ambassador to foreign countries as well as the army archives holder. As the tomb is unfinished, the man might passed away suddenly and at an early age. Despite its state, the tomb still demonstrates a set of well-made wall decoration. According to Ali El-Asfar, head of the ministry’s ancient Egyptian antiquities section, archaeologists have identified typical funerary scenes such as the funeral procession, the ceremonial dragging of the deceased’s statue with his wife wailing after his death, the tribunal of the underworld presided over by Osiris, and the welcoming of the deceased by the goddess of the West.

What is important, however, is the good condition of the tomb in relation to contemporary monuments from the same site. Excavation team leader Dr. El Aguizi told Ahram Online that Paser’s tomb was directly built on the eastern outer mud brick wall of the tomb of royal scribe and army head Ptahmes, which was discovered by the mission in 2010. Both tombs were robbed in antiquity, while they were found empty of their original funerary collections (two shabti collections found at Ptahmes’ tomb belonged to two women, Mutipet and Nedjem). But while architectural parts of Ptahmes’ tomb had been removed by modern “explorers” and survive in a number of museums, the tomb of Paser “bears all its architectural elements”, according to Ahmed Saeed, professor of ancient Egyptian antiquities at Cairo University’s Faculty of Archaeology. The tomb is small (12m.  X 6 m.) but, as Saeed exlains, Paser started to decorate his tomb from the rear in order to paint the main funerary religious paintings on the walls. So, while the monument remained unfinished, it still had all the features which would make it a suitable burial place.

According to Antiquities Minister Mohamed Ibrahim, future restoration of the tomb and the army necropolis at Saqqara will eventually attract more tourists, who will come not just for the Old Kingdom tombs but also the New Kingdom ones.