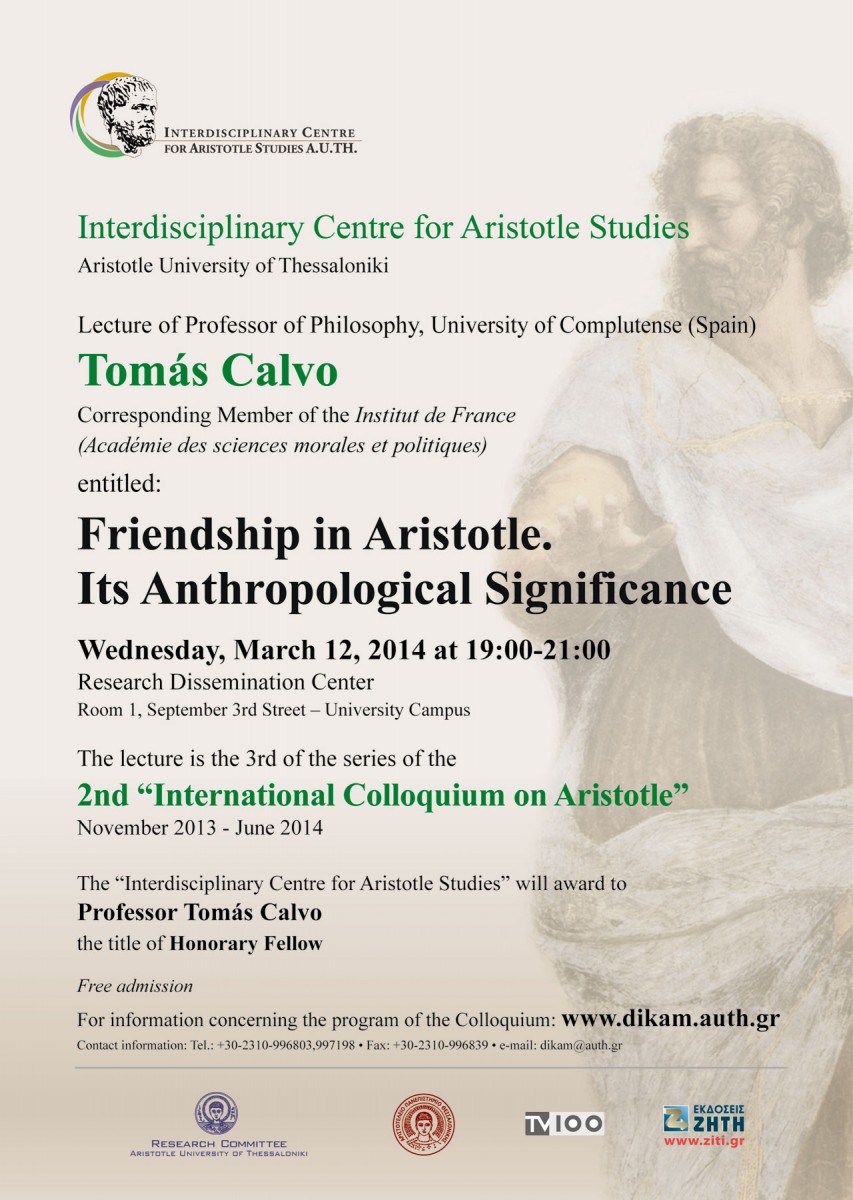 The Interdisciplinary Centre for Aristotle Studies is organizing a lecture by Professor of Philosophy at the University of Complutense (Spain) and Corresponding member of the Institute de France (Académie des sciences morales et politiques), Tomás Calvo. The lecture is entitled “Friendship in Aristotle. Its Anthropological Significance” and it will be given on March 12, 2014 at 7.00 p.m. at the Research Dissemination Center (Room 1) of the Aristotle University of Thessaloniki (September 3rd str., University Campus).

As is known, friendship has the greatest value for good life and happiness according to Aristotle. In fact, two complete books (VIII and IX) in the Nic. Eth. are devoted to friendship, which means that Aristotle paid much more argument and pages to friendship that to any other important ethical topic (happiness, justice, pleasure, etc.). Friendship is more than one ingredient among others in human good life. It is something necessary and noble (beautiful, καλόν), “it is a virtue or implies virtue”, it is the highest achievement of human sociability.

No doubt, φιλία has a meaning which is broader than the meaning of “friendship” (or “amitié”, “amistad”, “Freundschaft”) since it can be applied to any kind of relationship and community based on affection (between parents and children, lovers, etc.). However, I’ll only take into account the kind of relationship which we usually name friendship. And within this restricted framework of friendship I’ll focus on two specific topics related to the Aristotelian conception of it.

1. In the first place, I’ll consider the notion itself of friendship. We have to start –with Aristotle himself– by noting that “friendship” (i.e., φιλία understood as friendship) has a very complex meaning and carries several nuances in its ordinary use, so that people often speak of different kinds of friendship. Aristotle assumes this situation and finally proposes three features in order to establish its basic and essential notion and meaning. Friendship is (a) a kind of love (b) which has to be mutual, reciprocated and (c) acknowledged and known to both friends. (Note that features (b) and (c) are not necessarily shared by ἔρως).

However, this “minimalist” definition of φιλία does not solve the problem concerning the plurality of meanings (equivocity?) of the notion of friendship, since φιλία is a kind of love, and there are different kinds of love according to their intentional motivation: we may love someone (1) because he is good, because of his excellence, but also (2) because he is pleasant, or (3) because he is useful for us. Only in the first case one loves his friend and wish the best things for him for his sake, because of himself (ἐκείνου ἕνεκα, καθ’ αὑτόν). This is the “perfect friendship”.

This Aristotelian approach raises two interesting questions. The first of them refers to the unity of the notion. In the Eud.Eth. Aristotle states that the notion of friendship has the unity of τὰ πρὸς ἓν λεγόμενα, but he seems to forget and exclude this kind of logical unity in the Nic. Eth. I’ll try to show that the unity finally acknowledged by Aristotle is “unity by similitude” (the unity of τὰ καθ’ ὁμοιότητα λεγόμενα), and that this kind of unity is based on a strict logical linguistic mechanism. The second question refers to the meaning of the “self” in the notion of the perfect friendship: when Aristotle states that one has to love his friend and wish what is good for him because of himself (ἐκείνου ἕνεκα, καθ’αὑτόν), what does ‘himself’ properly mean? What is the self of human beings? In my opinion, loving one’s friend “for his very self” means loving him because of his character, because of his virtues which are both the result and the source of his elections and way of life.

2. Taking all these remarks into account I’ll confront three trends of criticism directed against the Aristotelian notion of friendship from “personalistic” philosophical stances. (1) According to the first of them the Aristotelian view is strongly naturalistic (as opposed to “personalistic”): loving someone because of his excellence would mean loving him as an excellent example of the human kind, not because of his personal value. To my mind, those who endorse such a criticism seem to forget that excellence and virtues are the result of our elections as rational and free agents. (2) The second criticism is linked to the first one. It emphasizes that in the last analysis friendship seems to aim at universal values instead of being directed to the valuable individuality of our friends. In addition to my answer to the first criticism we should remember that the Aristotelian friendship does not go beyond the friends themselves whose community becomes actualized by living together and sharing noble elections and activities. (3) Lastly, the third trend of criticism against the Aristotelian friendship stresses that it is actually based on an egoistical, self-centered attitude. No doubt, some Aristotelian passages may seem to support this view (cf., EtNic. VIII, 5,1157b32-36; IX, 9, 1170b7-8, etc.). Nevertheless, I think that a reasonable and appropriate understanding of these passages ―and of the whole of his doctrine― should bring us to exclude the “egoistical” interpretation. As far as the good friendship is concerned we must take into account (a) that the good for both friends is necessarily the same and therefore each of them wish what is good for himself when wishing what is good for his friend, and (b) that seeking the good for the friend means seeking something which is good in itself, and therefore good for oneself. To my mind, the moral of the Aristotelian message is that only those who seek the best for themselves can seek the best for their friends.

NOTE: The Aristotelian texts and passages I am taking into account are those devoted to friendship, particularly Nicomachean Ethics VIII, 1-9 and IX, 3-8. In addition to these we may quote some specific passages like Eud.Eth. 1236a14-22.