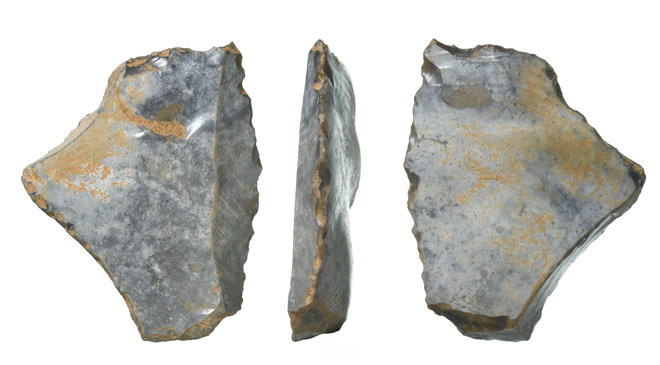 London’s long and rich history is often thought to have begun with the arrival of the Romans, but a new discovery at the new site of United States embassy in London suggests that the city’s past might reach back to the Palaeolithic period.

A Palaeolithic flint tool dating to approximately 700,000 to10,000 BC was unearthed by archaeologists at the Museum of London Archaeology (MOLA) during an excavation at the site located in Vauxhall, in South London. The find could be one of the earliest prehistoric objects found in London and hint at the first settlers of the city.

“What we have found may be the earliest archaeological evidence currently known from London. It will be interesting to see how this evidence relates to other prehistoric structures on the nearby Thames foreshore,” senior archaeologist Kasia Olchowska said.

Archaeologists believe that prehistoric people might have settled on the fertile banks of the river, that once used to flow at what is now South London. The site would have provided them access to rich food sources and served as a perfect hunting ground.

The discovery of flint tools in London could provide evidence of prehistoric activity in the region. “The flint tools found at the United States Embassy site are a rare discovery. In a City that has seen so much development, these fleeting glimpses of prehistoric people rarely survive,” Olchowska said. “We hope to be able to reconstruct and have a better understanding of the prehistoric landscape of a much wider area than at present,” she added.

Further analysis of the flint tools will be carried out by MOLA in order to establish firm dates and learn more about their production and use.