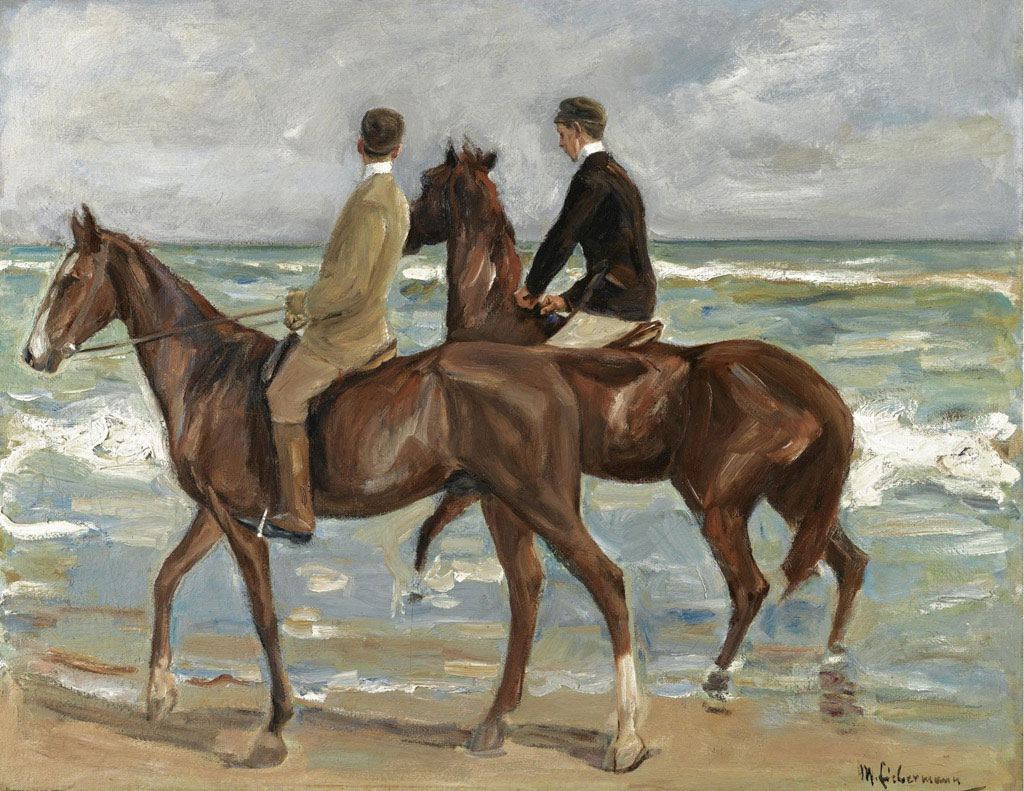 Last Friday, Sotheby’s announced that an exceptional work by Max Liebermann, discovered among the trove of art secreted away for decades by Cornelius Gurlitt will be sold by the heirs of the painting’s original owner following its successful restitution.

Two Riders on a Beach was first shown in public in 1901, the year it was painted, following which it was acquired by David Friedmann (1857-1942) of Breslau, a passionate art collector and a prominent figure in society at the time. Friedmann is known to have owned at least two works by Max Liebermann, in addition to works by Gustave Courbet, Camille Pissarro and Jean-François Raffaëlli, Jozef Israëls, Walter Leistikow. Having made his fortune in brick production in Silesia, then part of Germany, David Friedmann and his family spent their summers at the grand Neues Schloss on their estate at Grossburg (now Borek Strzeliński, Poland) and the winters in an elegant villa on Ahornallee in Breslau.

Over the course of the 1930s David Friedmann was subject to increasing persecution by the Nazis. Forced to hand over his properties to the Nazis one by one, in 1938 he prepared to sign over his country estate to a high-ranking Nazi official.

Eventually each of David Friedmann’s properties and art works were lost under the Nazis. He died in 1942 of natural causes. His only child, Charlotte, perished in Auschwitz on the 9th October 1942, and the following year David’s father and mother were deported to the same camp where they too died. David Toren, David Friedmann’s great nephew and the only living heir to have seen the painting hanging in his great uncle’s collection before it was seized by the Nazis, managed to escape on a Kindertransport leaving Germany and grew up in Sweden before moving to New York where he lives now.

The acquisition of the painting by Hildebrandt Gurlitt

In 1939 the painting was appraised for the Nazi authorities as Jewish-owned property at a value of less than 100 Reichsmarks, and in July 1942, four months after David Friedmann’s death, the Liebermann was sold by the Nazi authorities with the auctioneer of stolen Jewish art Hermann Petschel.

The painting was acquired at the auction for 1,600 Reichsmarks by Dr Cornelius Müller Hofstede, the executive director of the Fine Art Museum in Breslau (Schlesisches Museum der bildenden Künste), and placed in the museum. Müller Hofstede had been commissioned by Hildebrandt Gurlitt to seek out works by Max Liebermann and so wrote offering him Zwei Reiter am Strand in August of 1942, though it is unknown whether Müller Hofstede was selling for personal profit or to raise funds for his Museum. Dr Gurlitt is listed in Matthias Eberle’s catalogue raisonné on Max Liebermann’s oeuvre as the next owner of the painting after David Friedmann.

In 1945 the painting was seized by the allies’ Monuments Men and held at their headquarters in Wiesbaden, but failing to source any documentation linking the painting to its rightful owner or his heirs – since the Nazis had succeeded in destroying much of the documentation relating to David Friedmann – the painting was returned to Hildebrand Gurlitt in 1950.

Thought to have been passed down from father to son, Two Riders on a Beach surfaced from Cornelius Gurlitt’s apartment in Munich in 2012 in excellent condition after having been hidden away for decades. Unlike many of the other works retrieved, this painting had been hung on a wall in the apartment, evidently much admired by Gurlitt. Restitution researchers were in no doubt that the collection might well include previously untraced, looted works of art that had been missing for more than seventy years, not least because of Cornelius Gurlitt’s ownership of the collection. This proved to be the case and, alongside a number of other well-documented works that are known to have been confiscated from Jewish collectors and dealers during the Third Reich, David Friedmann’s Liebermann painting was discovered in the collection.

Cornelius Gurlitt died in 2014, having committed to returning those works from his collection that were demonstrably lost by Jewish collectors during the Nazi era and not restituted after World War Two. Two Riders on a Beach was one of the first two works to have been successfully restituted from the Gurlitt cache, and it was returned to David Friedmann’s heirs in May 2015. All that is known of the other artworks that once formed part of David Friedmann’s collection is the names of the artists, as documentation of them was destroyed over the course of the Nazi regime. Two Riders on a Beach will be exhibited in public in over half a century when it goes on view in London on 19th June at Sotheby’s.

Max Liebermann is considered to be one of the greatest German artists of his generation, and Zwei Reiter am Strand nach links of 1901 is one of his first large-scale oil paintings of horses and riders – a theme that continued throughout his career but was rarely depicted with such elegance and poise as in this particular work. The painting is thought to have been executed in the artist’s studio in Berlin, following several studies made during his stay in the fashionable resort Scheveningen on the Dutch coast, where horses from the Circus Schumann were trained each morning on the beach. In his sketches executed in Scheveningen Liebermann developed images of riders on both calm and nervous horses, and here the two are combined to create a subtle, yet powerful composition.