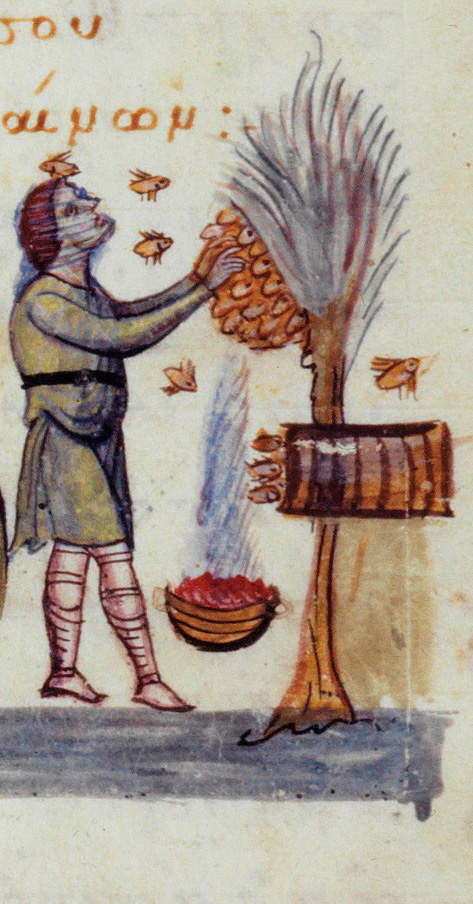 Archaeologist Sophia Germanidou will address the subject “Beekeeping in Byzantine culture. Evidence from textual sources, depictions, archaeological finds” in the framework of the Symposium “Beekeeping in the Mediterranean from antiquity until today: historical findings and current issues” (9-10 Oct. 2014, Syros, Cyclades).

Mrs. Germanidou will present “an overview of evidence relating to beekeeping during the period of 4th-15th centuries, gathered from written sources, depictions, archaeological finds of South Italy, Greece and Asia Minor.

“Apart from praising the virtues of the bee, texts provide interesting information on beekeeping practices, such as the local productivity, the multiple applications of beekeeping products, the terminoly and shape of beehives. According to the law, bees fell in the category of movable assets that were taxed and bequeathed. Main exploitation and large quantities of beekeeping products were achieved in monastic communities. Beekeepers did not consist a profession defined by a guild, however the Byzantine state controlled each aspect of the commercial value of honey and wax.

“There are few beekeeping scenes in Byzantine art, characteristic, nonetheless, of their variety in forms and material of beehives; horizontal clay open at one or both ends, wooden and plank, tree-trunks, woven wicker. The representation of the beekeepers in work is rare, attested only in the scene of Aristaeos bearing the protective face-mask, who, according to the myth, invented apiculture.

“A limited number of beehives unearthed and dated to the first centuries A.D. indicate the use of the horizontal clay type, shaped more or less as a cylinder, found in fortresses, rural sites, workshops or even in burials. From a geographical perspective, finds are recorded in southern and central Greece (Delphi, Attica,  Boeotia, Isthmia, Crete) but non from Asia Minor. A single are the blocks of beehives hewn in the tuff rocks of the Cappadocian plains. The lack of identification of any Byzantine beekeeping implement remains striking”.