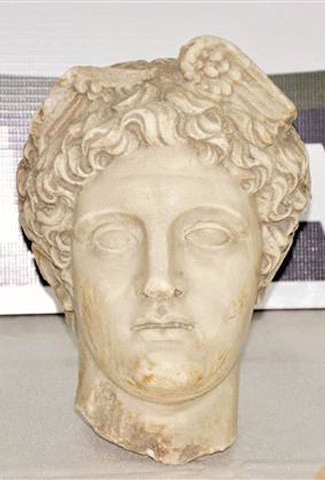 The head of a 2,000-year-old Hermes statue, among other artefacts, has been seized during an operation by police forces in the Central Anatolian province of Sivas.

The Sivas Police Department Directorate of Anti-smuggling and Organized Crime Branch has been preparing for three months before raiding various addresses in villages and districts of the Central Anatolian province of Sivas, as well as in Nevşehir, Adıyaman and Kayseri on January 13.

The most impressive of the historical artifacts recovered by the police in Sivas is a marble head depicting the ancient Greek god Hermes.

Three years ago, reports Hürriyet, the artefact was sold for $1 million. The buyer then tried to smuggle it abroad. At the time police haven’t succeeded in locating the head.  The head was examined by Cumhuriyet University experts who confirmed that it was the original one. Apart from the Hermes head, three rings, a plate, 23 coins, six books written in the official language of the Ottoman Empire, two column fragments and four inscribed stones inscribed were also among the findings recovered by the police.