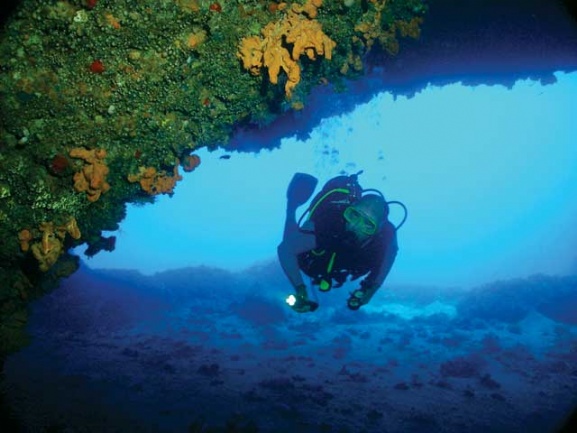 Visitable shipwrecks in the Archipelago of Sporades and the Pagasetic Gulf

The Central Archaeological Council has approved a survey for the enhancement of four shipwrecks in visitable underwater archaeological sites of the Sporades Archipelago and the western Pagasetic Gulf. As pointed out by the Council, the survey conducted by the Ephorate of Underwater Antiquities is part of a bigger development plan concerning the underwater cultural wealth and the diving tourism, which is being promoted by the Ministry of Tourism in collaboration with the periphery of Thessaly.

The work, funded by operative programmes of the NSRF, is being supervised by a special committee, consisting of members of the Ephorate of Underwater Antiquities and the Directorate of Prehistoric and Classical Antiquities of the Ministry of Culture.

According to the survey results, the following underwater archaeological sites are declared visitable: a) the shipwreck of the Peristera island (Alonnisos), dating back to the 5th c. BC and consisting of an accumulation of amphorae in two successive layers, 25m in length and 12m in width, b) the Byzantine shipwreck of the Kikynthos island, looted in the past, with just a few samples of pottery dated between the 9th and 13th c. AD, c) the shipwreck of the Akra Glaros site, also Byzantine, where the in situ anchors suggest the possible existence of another shipwreck in the area, and d) the shipwreck at the Telegraphos site, dating to the mid-4th c. AD, which due to the steep incline of the seabed is dispersed over a wide area.

According to the plan of the common ministerial decision, which has also been presented and approved by the Central Archaeological Council, in the above mentioned visitable underwater archaeological sites following activities will be allowed to visitors: guided diving in depths up to 40m –visitors will be accompanied by divers of organized diving schools and members of the Ephorate of Underwater Antiquities, which will be supervising the sites– to survey the seabed with or without the use of self-contained breathing apparatus, non-commercial photography and seabed surveys using clear bottom boats.

Interventions of any kind on the seabed and the objects of the area, their removal, all forms of fishing or any other activity apart from the underwater visits and the scientific research will not be allowed. During underwater excavations visiting possibility will be temporarily suspended.

During the tours the boats taking the visitors to the sites will not be allowed to approach other spots apart from the guarded and properly protected points for the arrival and departure of ships.