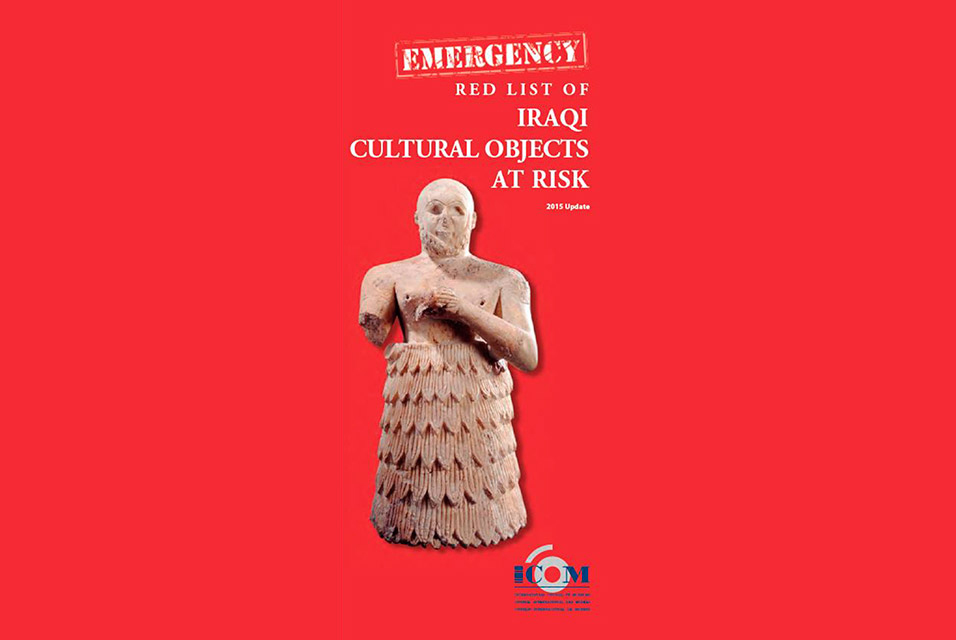 An updated and enriched version of 2003 Red List on Iraq

In response to the violent events that have rocked Iraq in recent months, bringing about the destruction of world cultural heritage,the International Council of Museums (ICOM) has presented the press with its Emergency Red List of Iraqi Cultural Objects at Risk, an updated and enriched version of ICOM’s very first emergency Red List on Iraq published in 2003.

The threat to cultural objects posed by the conflicts in Iraq and Syria, as demonstrated by the recent intentional acts of destruction, call for an immediate response from the international museum community. The Emergency Red List for Syria, published in September 2013, and the one now being published for Iraq are concrete tools intended to prevent looted objects from being subject to illicit trafficking.

The Emergency Red List of Iraqi Cultural Objects at Risk was officially presented to the press on Monday, 1 June, 2015 at the musée du Louvre, in the presence of  Fleur Pellerin, French Minister of Culture and Communication; Jean-Luc Martinez, President-Director of the musée du Louvre; Irina Bokova, UNESCO Director-General; Hans-Martin Hinz, ICOM President; and Richard Stengel, U.S. Department of State Under Secretary for Public Diplomacy and Public Affairs. International experts who contributed to ICOM’s efforts to draw up the Red List were also in attendance.

The Emergency Red List of Iraqi Cultural Objects at Risk highlights the types of objects which, in demand by the art and antiquities market and protected by legislation, are vulnerable to theft or looting. Individuals and institutions liable to acquire objects originating from Syria or Iraq are requested to demonstrate extreme prudence as regards the provenance and legal documentation of said objects. This practical tool has already proven successful over the years, enabling law enforcement agencies to seize thousands of objects.

Beyond the production of the important prevention tools that the Red Lists represent, and its daily cooperation with customs and police forces around the world, ICOM continues to innovate and develop new measures for monitoring emergency situations, with the help of its Disaster Relief Task Force for museums, and for fighting the illegal market for cultural objects, notably through the creation of an International Observatory on Illicit Traffic in Cultural Goods in 2013.