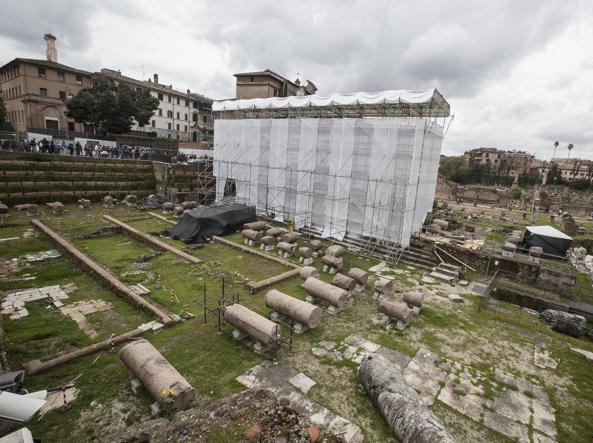 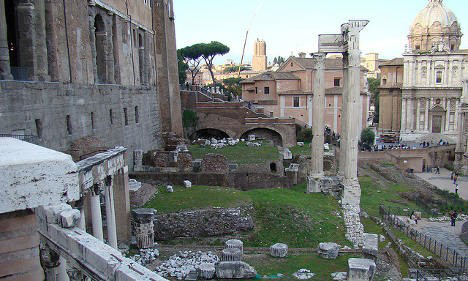 The restoration of the 2000-year-old Temple of Peace inside the Roman Forum has triggered a furious debate among archaeologists and experts about whether Italy is taking the right steps to save its cultural treasures.What does “anastylosis” mean?, asks Corriere Della Sera in an article criticizing the restoration of the Temple of Peace. “The issue concerns all of us Italians, because we are the owners of this huge cultural heritage. And we should ask ourselves: Is it right to rebuild the Roman Forum, at the very heart of Rome, the most visited site in Italy, these seven columns who had been lost for centuries, using reinforced concrete? Everything has to do with the meaning of the word “anastylosis”. The Treccani dictionary explains it as “a reconstruction of old buildings, especially of classical antiquity, by restoring them using the original architectural elements”. But how many of these “original elements”? Almost all? At least half of them? One fifth? A tenth? The discussion has been going on for decades…” The daily newspaper has also published photos of the materials being used at the site.

The “anastylosis” works were set to begin in early March. The missing columns from what remains of the temple built by Emperor Vespasian were to be reconstructed by April 21, Rome’s birthday. “The goal is to replace the five marble columns of the Egyptian portico that surrounded the temple, where they were at the time of Vespasian,” the municipal Superintendent of Cultural Heritage Claudio Parisi Presicce said in February, adding that large fragments of the Egyptian marble colonnade have been studied and recomposed for the restoration project using “very sophisticated technical work” that takes account of seismic issues.

Now, archaeologists and architects are furious about the use of cement to reinforce the columns.

Architect Sandro Maccallini has claimed the restoration includes “a totally fake column, with a fake base, with a fake core and a capital that is probably fake” adding that “The Roman Forum will lose its identity as an archaeological site, unique in the world, where everything is precious and unique because it is authentic.”

“You don’t have to be Doctor Freud to understand that the erection of the Temple of Peace’s columns is the result of an archaeology desperate for a pill that will revive it, naturally with the highest media profile,” Tomaso Montanari, an art expert from Naples, said to Corriere Della Sera.

However, Presicce answered that the approach was akin to anastylosis, the reinforcement method used to restore the acropolis in Athens.

The Temple of Peace

The Temple (or Forum) of Peace was built by Vespasian with the spoils of the Jewish War that he brought to Rome after the fall of Jerusalem in A.D. 71. Dedicated in 75, it was one of the most impressive monuments in the city. It stood to the north of the Basilica Aemilia in an area that still had not recovered from the great fire of A.D. 64. The complex included a plaza with garden, a temple, and a library within which were placed many of the treasures captured in Jerusalem. Ancient writers marveled at the number of important works of art installed here; the core of the collection had been brought to Rome by Nero from around the empire to decorate the Golden House. Vespasian made these available for the enjoyment of the public.